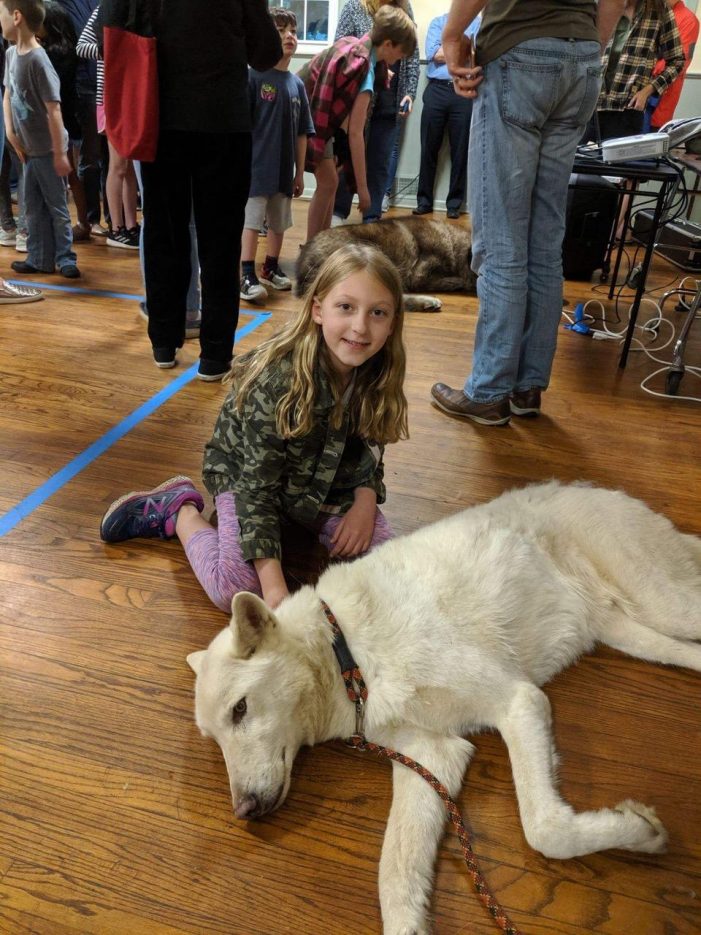 The Mendham Township Library, along with Howling Woods Farm, a 501(c)(3) public charity animal rescue in Jackson, New Jersey, presented a “Live Wolves” program on Thursday evening, May 16, at the Brookside Community Club.

Attendees were given the opportunity to meet the wolves following the program. They could pet the wolves and have a picture taken with them.

“The wolves were extremely calm and friendly to all of the people that met them.  We had over 160 people attend the program that evening,” says Trish Hall, Library Program Director.  “We have been planning the program for a few months. We had Howling Woods Farm at the library about four years ago, so we knew they had a great, interesting program with live wolves.  We had a huge turnout four years ago and wanted to bring the wolves back so the public could have the opportunity to see them again.”

Part of the mission of the program is to explain and show that the wolves are very calm and timid animals. “The general public believes wolves to be aggressive, mean animals.,” says Hall. “Howling Woods tries to dispel the myth that wolves are a dangerous aggressive beast.  Most of the fairy tales and stories refer to the wolves as being bad. They explained that we would rarely see wolves in nature as they are very timid and avoid people. They also explained that there is a diminishing wolf population and that man is their biggest predator. The wolf population in Yosemite National Park has gone down from 200 to 80 in recent years.  The wolves in Yosemite are protected but if they leave the park, they are at risk of being shot. Often it is cattle ranchers who hunt wolves in an effort to protect their herd of cattle.”

Careful planning went into the program, especially with the wolves involved and a large number of folks expected to attend. Also, the event had to be moved from the library to a larger venue to accommodate extra people.  “We got extra insurance because the venue had changed and because we were bringing in wolves. The wolves are calm and friendly, and accustomed to being around people and children, but they are still animals. Our program was designed for families so we knew there would be small children; the combination of wolves and small children could be unpredictable, so we wanted to be prepared,” says Hall.

Jennifer Gilmore attended the program with her 8-year-old daughter, Reese, who attends Mendham Township Elementary School. “It’s incredible how they play a big role in keeping our ecosystem healthy. How they communicate by body language and howling. They travel in packs and work together. They all have their part to play,” says Reese. She also adds, “It was really interesting to learn more about wolves and actually see them live for my first time and interact with them.”

Brian Boden was also among those present. “I always enjoy our library’s programs, always short and very interesting.  This one gave folks some insights into the many persistent myths about wolves, which have a bad and very mistaken reputation, and having two of them calmly letting everyone pet them was wonderful.  Humans cling to myths and owe animals like wolves a lot, hopefully people will contribute to the Howling Woods Farm who runs the shelter for wolf-dog pets, taking them in after superficial and casual people ditch them for no longer being puppy-cute at a given age.  Like they are toasters, or latest cell phones du jour. Everyone loved petting these beautiful and threatened creatures.”

For more information about the Mendham Township Library, visit mendhamtownshiplibrary.org. To find out more about Howling Woods Farm, go to their website, www.howlingwoods.org.