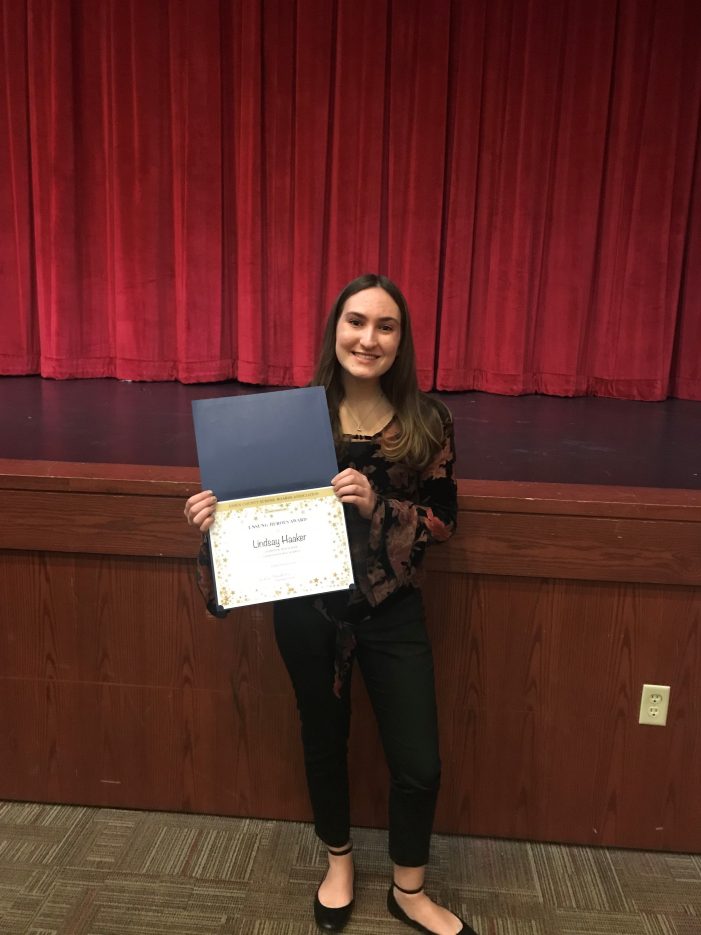 A Livingston High School senior was recently recognized for contributions to her school and community.

On March 14, the Essex County School Board awarded Lindsay Haaker with the Unsung Hero award.

Haaker explained that her guidance counselor nominated her for the honor, but she did not know this until she was called down to the office in early March.

“At first I was surprised because I wasn’t’ even aware of this award,” she said. “I just think reflecting back on all of it makes me proud of everything I’ve done.”

Haaker,18, who will be attending George Washington University in Washington, D.C., in the fall, told the Livingston News she has always enjoyed helping others.

“I like to be a pretty busy hard-working person,” she explained. “When I started high school, I wanted to try out a lot of different kinds of activities.”

She joined the costumer crew for theater her sophomore year after taking a fashion class. Being able to help create clothing for shows is a really cool experience, she said.

“I definitely like being able to work with everyone,” Haaker remarked.

The teen also created her own club at school titled Cards for Kids. The group meets around holidays throughout the year and members put together cards and care packages for young children who are in a local hospital for extended stays.

“Even though our school has a lot of options for clubs, we wanted to create a club of our own,” Haaker said.

Haaker isn’t just active in school. From eighth grade through her junior year she volunteered with Friendship Circle, an organization that helps kids with special needs. In fact, as a freshman, she would visit a child with autism at his home once a week and spend time with him.

“Friendship Circle is a big organization in the community and it’s something I wanted to be a part of,” she said.

Haaker has also made a little money in her spare time. For the past five summers she has worked as a camp counselor at Willow Lake Day Camp in Roxbury. Not only has she enjoyed it, but it has turned into several babysitting opportunities as well.

As she looks ahead to college in the fall, she feels all of her volunteering and being active has taught her about time management and how to balance social life, school and work.

Haaker plans to study human services and social justice at GW and hopes to join many clubs there as well.

According to Haaker, she doesn’t do anything for the recognition, but simply because it’s the right thing to do.

“I definitely would consider myself a quieter person, but I’m still confident at the same time and that has allowed me to take on those leadership roles and be an active part of the community,” she said.