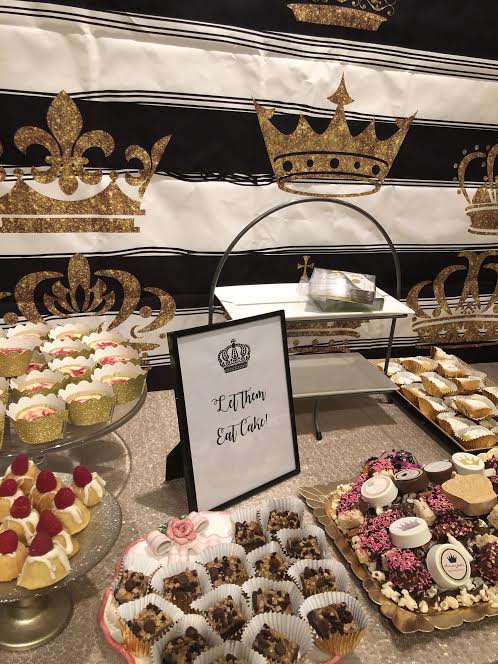 A self-proclaimed British royals super fan has turned her fandom into a way to benefit new moms in need.  Livingston resident Jodi Eisner has been a fan of the royals her whole life. She can remember being over excited when Prince Charles married Princess Diana in 1981.

“What little girl wouldn’t be fascinated with a real-life princess?” asked Eisner.

As she got older, she wanted her friends and family to share in her passion for following the royals.  She decided that she would combine it with her love for baking and throw a party.

“It all started when I had a party when William and Kate got married,” Eisner said.  She taped the ceremony and played it to an audience of party goers wearing tiaras.

“I had a second party when they had a baby,” she noted.  This time, she thought to ask her guests to bring items parents need for a newborn baby.

“Anything you need to get started when having a baby,” she said. Each year, guests brought baby wipes, diapers, baby clothes, sleepers, feeding equipment, bottles, bibs, towels, blankets, and jackets.

After the party, Eisner brought an SUV full of donations to Isaiah House, a shelter in East Orange that helps new moms get on their feet.

Last year, Prince William and Kate had their third baby and around the same time Prince Harry married actress Megan Markle, a great making for another party. This time, Eisner reached out to Livingston Neighbors Helping Neighbors, a new charity organization that helps Livingston residents in need.

“They were overwhelmed with gratitude,” Eisner said, and the group told her, “We’ll get it to the right people.”

This year, the party was held in honor of Meghan and Harry’s first baby. Her family often helps with the parties and indulges Eisner’s passion.  This year, her daughter Laine, 21, was away at college, but her youngest daughter Annie, 16, and her husband Andrew helped.

“My husband is a huge football fan.  He understands that this is my Superbowl Sunday. He understands when you’re crazy passionate about something. He respects this as I respect football. It’s ok to indulge in it all,” she said.

Eisner decided to get a little cheeky and made some royal-themed cocktails like the “An heir and pare of spares,” made with pear vodka, named because a king need an heir to the throne and one heir to spare.  She also made a “Markle sparkle” with prosecco-based punch and a “Strawberry mule,” made with ginger beer in honor of everyone’s favorite ginger prince.

As for the donations, “My friends were incredibly generous,” she noted.  “People who couldn’t attend sent gifts through Amazon,” Eisner added.

Eisner said she filled a minivan with the gifts dropped it off to Livingston Neighbors Helping Neighbors.

Stacey Rubenstein, a board member of Livingston Neighbors Helping Neighbors wrote on the group’s Facebook page wrote, “With a small number of donations directed to a local family, the rest were delivered this morning to St. Michael’s and a home for young mothers in Newark.”

Rubenstein added, “We were blown away by Jodi’s creativity and her generous spirit! Thank you to all who attended this wonderful party with a purpose!”