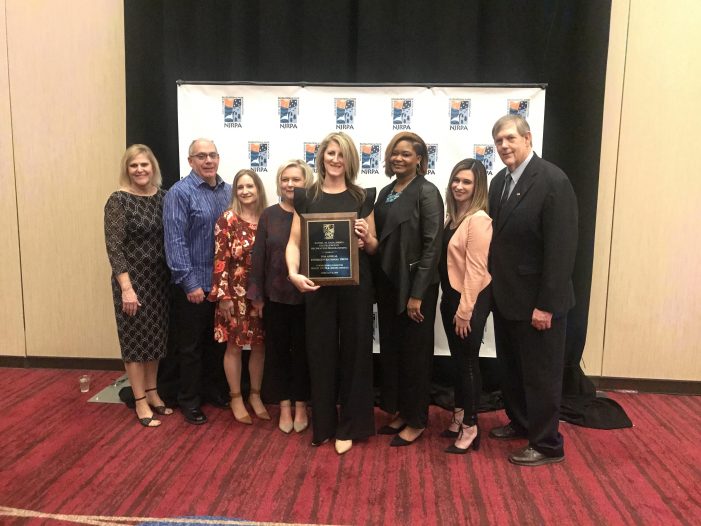 February 26th was an amazing night for Livingston’s Senior Youth and Leisure Services (SYLS). That was when they were presented with the prestigious Daniel M Gasalberti Award for excellence in Recreation Programming.

Taking place at Harrah’s in Atlantic City during the New Jersey Recreation Park Association’s (NJRPA) Annual Conference, the team enjoyed a formal dinner event where over 20 awards were presented that evening for different categories. The room was filled with New Jersey Recreation Departments and several state officials.

The Daniel M Gasalberti Award was named after former New Jersey Recreation and Park Association (NJRPA) President, Daniel M Gasalberti, who had served from 1982-83. He was remembered for his creativity, dedication and devotion to recreational programs. According to Lilliana Branquinho, Special Events Supervisor who has been working at the Livingston Senior Youth and Leisure Services for 8 years, she says this of the man: “He was beloved by the citizens for the programs and events he implemented. The award is given out to such like-minded organizations.”

Winning the award for their long-running Intergenerational Prom, Branquinho is beyond thrilled. In fact, the prom is such a hit, Livingston has been enjoying it for an impressive 31 years. The Intergenerational Prom that takes place at Livingston High School is eagerly embraced by everyone. From the seniors, whose ages range from 70 to 90 years old, to the high schoolers from all grade levels.

Describing the Intergenerational Prom as something she counts as one of her most anticipated events that the organization does, Branquinho relates, “This event is very special and one of my favorites because I truly enjoy seeing and feeling the happy energy in the room that evening. I know it puts a smile on our seniors faces. I get to see them enjoying each other’s company and interacting with the students. Truth be told, I love to have fun with them,” she shares. “I’m a real proponent of socialization being one of the best antidotes to depression and loneliness, which can be detrimental to seniors’ lives. So every time we can provide our seniors with an opportunity to have a great time where there’s fellowship, music and food, it’s a good thing.”

Branquinho also praises Livingston itself. “We are very fortunate to live and work in a town that completely supports events like this. We are also very thankful to have the support of local businesses and organizations that kindly help sponsor the event. There’s a lot of planning involved so the Intergenerational Prom committee starts early with all the planning and preparations. We are already discussing ideas for next year,” she enthuses.

Dinner, dancing, door prizes, even crowning a Prom King and Queen, the Livingston Intergenerational Prom offers so much. The Prom King and Queen are selected on their involvement/volunteerism in the community, and the duo is made up of one senior and one high school student where they alternate the king or queen throughout the years.

Perhaps the best thing about Livingston’s timeless event in Branquinho’s eyes is the connection and kinship that it creates between the high schoolers and seniors, showing that age is really just a number after all. “The intergenerational prom tries to bridge the gap between two generations that tend to be foreign to one another,” she asserts. “It allows for two completely different generations to come together and enjoy an evening where they can interact and learn about each other in a fun and friendly environment.”

“It was an honor to receive the Daniel M Gasalberti Award on behalf of the SYLS Department and the Intergenerational Prom Committee,” Branquinho prides. “A lot of planning and preparation goes into it so it was definitely rewarding. It was a big sense of pride to be recognized by our peers at the New Jersey Recreation and Park Association (NJRPA).”