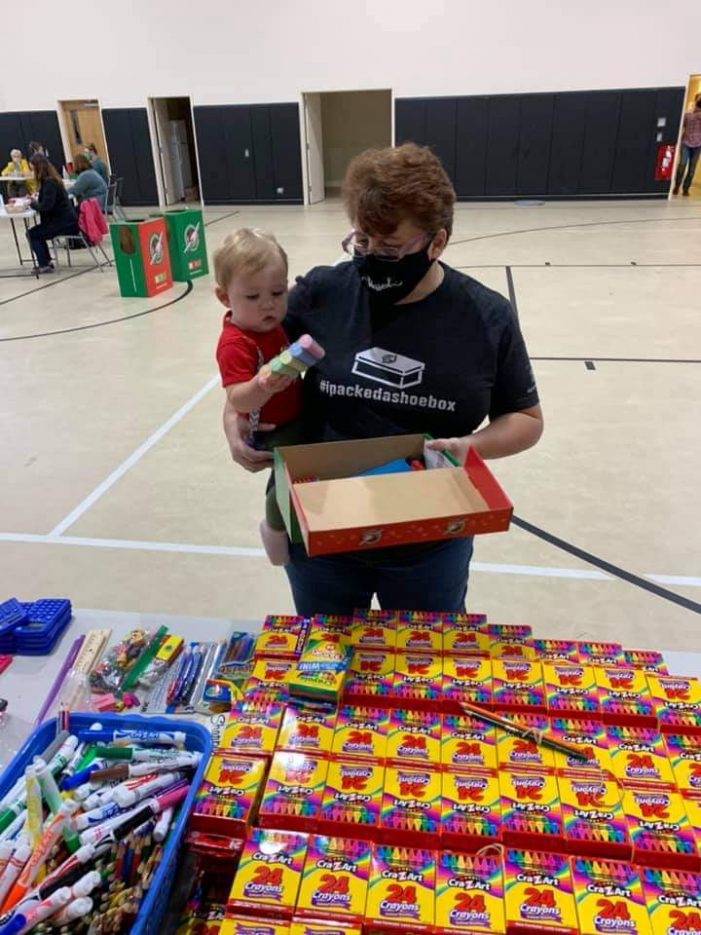 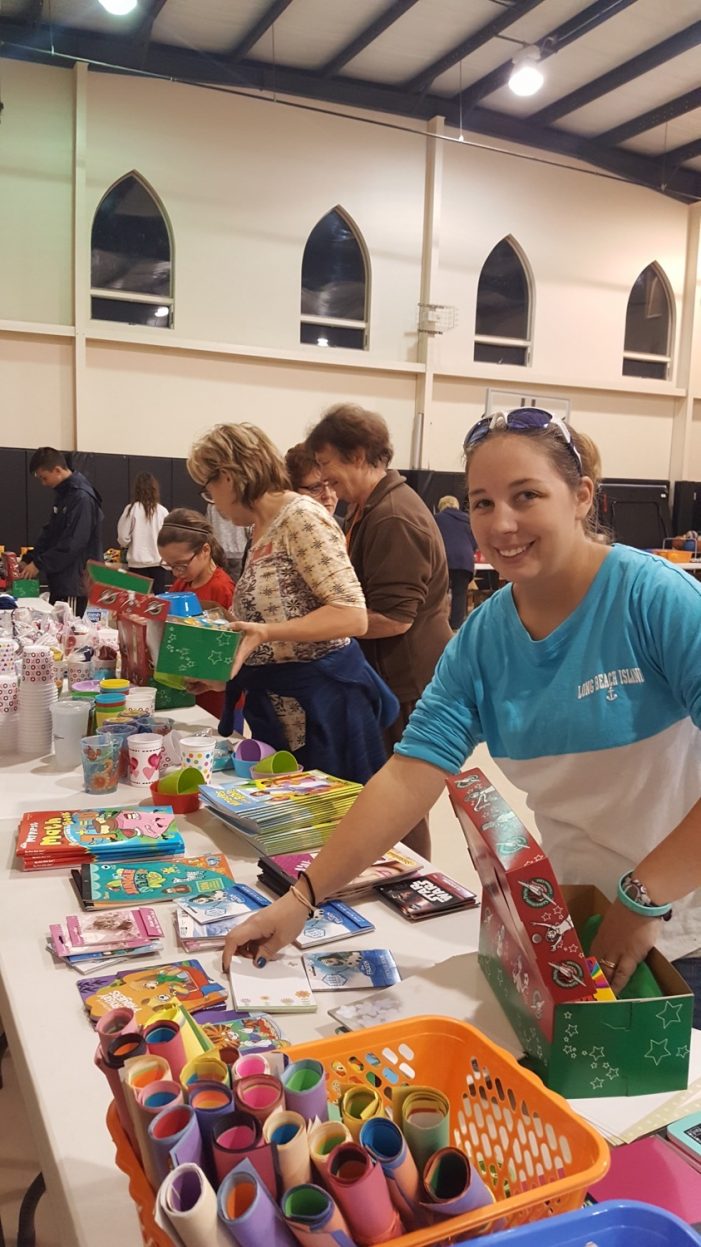 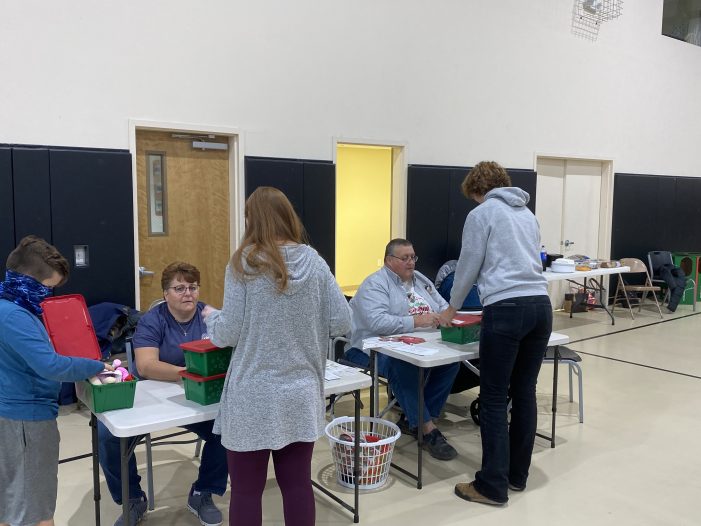 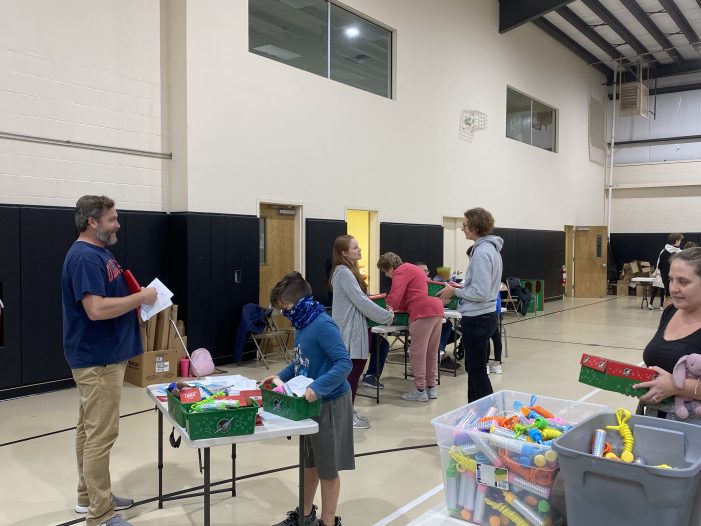 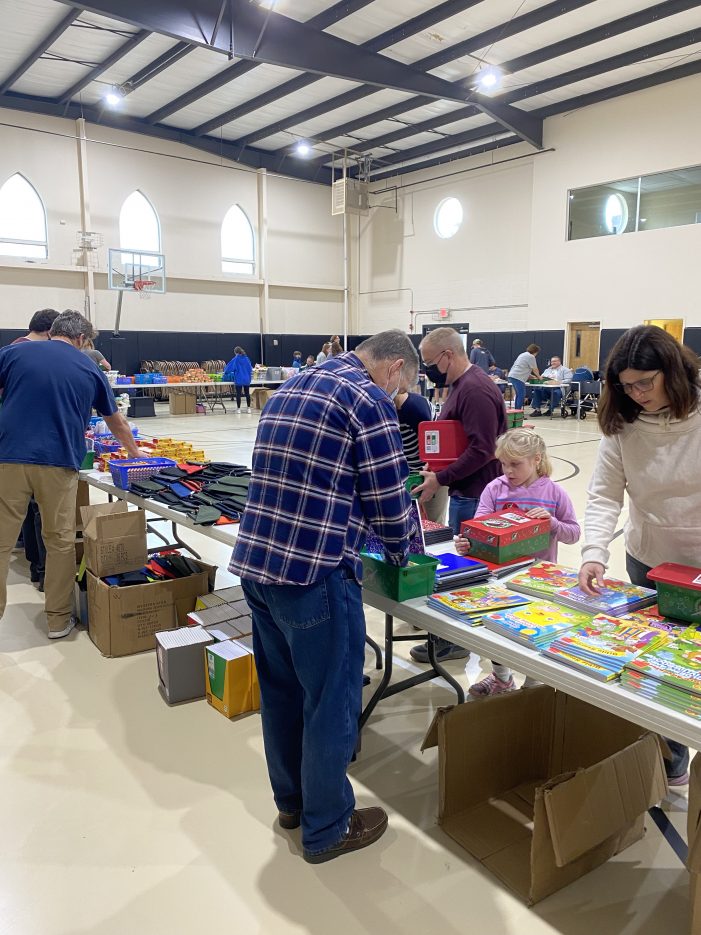 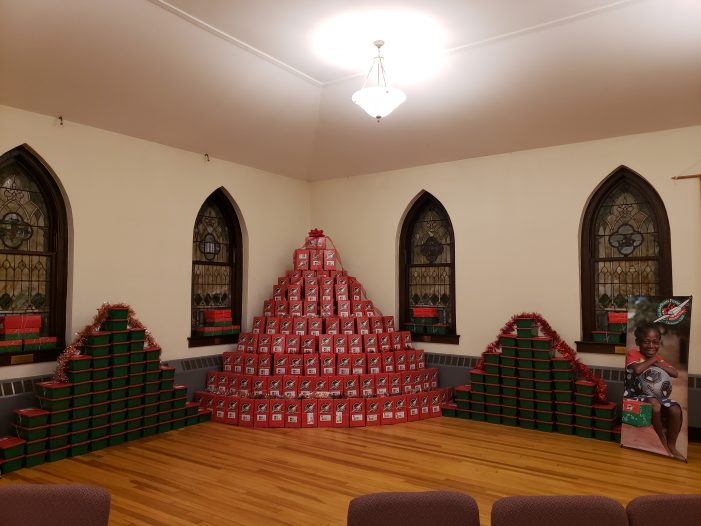 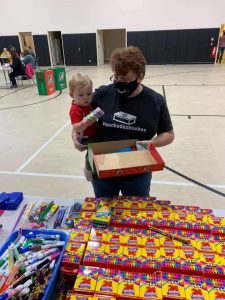 Blewett shared a brief history of Operation Christmas Child, which started with a forgotten promise.  In 1993, Rev. 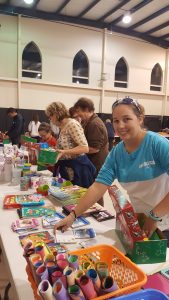 Franklin Graham, President of Samartan’s Purse (an organization dedicated to do good works, like the Good Samaritan in the Bible), received a call from a man in England asking for help in filling shoeboxes with gifts for children in war torn Bornia.   Graham agreed to help, but it was months before Christmas, and it went to the back of Graham’s mind.  Suddenly, it was November and the man from England called back Graham about the boxes. Graham had forgotten all about them.  Working fast with help from a church in the U.S. and help from Canada, a miracle happened:  they were able to come up with 28,000 shoeboxes filled with gifts for the children.  Operation Christmas Child was born.

Since 1993, 188 million children in 170 countries have received boxes.  The boxes contain gifts such as colored pencils, gloves, socks, a pair of shoes, a toy, etc.  Each box is labeled as to the sex and age group of the child who should receive it.   Operation 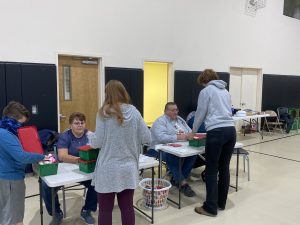 Christmas Child recipients are ages 2 – 14.  Also, inside each box is a book in the child’s own language with the stories of Jesus.  Many churches on the receiving end, which give out the boxes, invite children to come to a 12- week the Greatest Journey program to learn more about who Jesus is.  Those children who choose to attend will tell others in their area about Jesus.

Blewett has seen Operation Christmas Child from both sides:  the giving and the receiving.   Two years ago, she was invited to Tanzania to be there when boxes were distributed in June.  (Due to travel distance, customs, etc.  it can take a while for the boxes to get to their destination.)  Blewett said she believes God helps the right child get the right box.  She saw a child with very worn shoes open her box to find a pair of crocs in it! 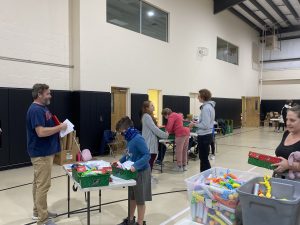 Blewett notes that for Ledgewood Baptist Church, Operation Christmas Child is a year-around project, gathering items for boxes and then having a box filling event before the shoebox collection week. Last year, her church contributed 800 boxes. Besides contributing boxes, her church is a drop-off point for others to bring their boxes and then the Blewetts get them down the delivery pipeline.

“It reaches a spot in your heart,” said Paula Ackley of Christ 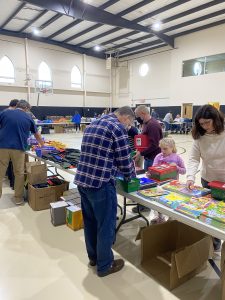 Episcopal Church in Budd Lake.  Her church has been donating boxes for over two decades to Operation Christmas Child. Former parishioner, Carole Zicherman of Florida, originally brought the idea before the congregation when the church was looking for outreaches. First Zicherman, and now Ackley, of Budd Lake,  has coordinated the effort at the church. Ackley said, “You want to do it.  You feel like this is part of what you should do.”  She noted how the children receiving the boxes, who have so little, get excited at something most children in this country wouldn’t see as much of a gift:   crayons, a pad of paper, the simple things.

Another church in Mount Olive which supports Operation Christmas Child is New Beginnings Bible Church in Flanders. Its treasurer, Eric Seal, shared that the previous day he had dropped off 43 boxes. “[Our church] has participated in the shoebox program for roughly 10 years. We’ve also branched out to my place of employment, Red Hook Terminals in Newark.  They do a fantastic job supporting the program.”

The children who receive the boxes come from a variety of situations.  The Port Morris United Methodist Church

in Landing found out about one such situation from a former pastor and his wife who came from Bulgaria. Their Bulgarian church had received the shoeboxes and gave them to children in a Bulgarian orphanage, some of whom were not necessarily parentless, but were sick or disabled and the parents gave them up. Those children knew they had a family which may have kept healthier children, but they were abandoned.  The orphans were vulnerable to being exploited once they outgrew the orphanage, and the boxes helped the local church to make a vital connection with them, to offer them love and guidance.  The Landing church adopted Operation Christmas Child a few years ago as its Christmas Outreach.  Boxes can be tracked, and the Landing church has seen its boxes go twice to the Ukraine, once to Honduras, and once to the Dominican Republic.

Besides being packed with love, Ackley noted that before the boxes leave her church, they are prayed over:  for those who will be handling each box during its travels and for the one who receives it.

Blewett echoed that sentiment, “The most important thing that goes into any box is prayer.”