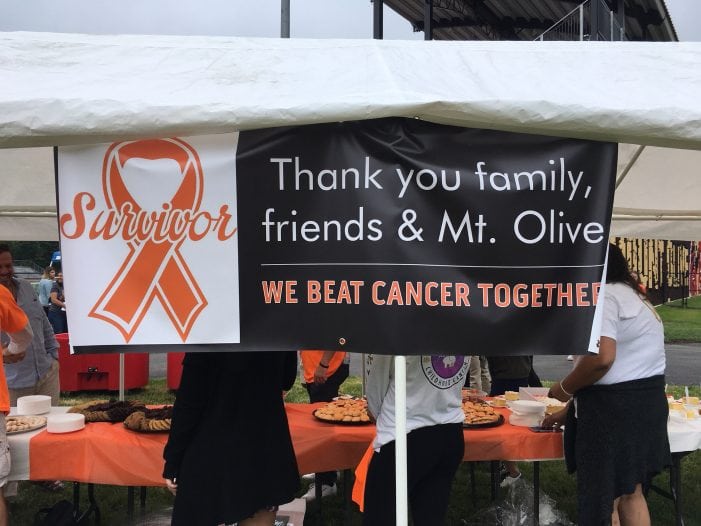 Collin Berg could be spotted wearing an orange hat and t-shirt with the word warrior written on them during his “End of Treatment Celebration” on June 23 at Mt. Olive High School, Flanders.
The event was given by the Berg family to thank the community for all their support during Berg’s treatment to battle leukemia which ended on June 20.
“It was important for me to have a way to say thank you to all the people in the community and beyond for all their support throughout my journey,” says Berg.
“The celebration was my family’s way of saying thank you. It was really nice to see everyone and be able to thank them in person.”
Berg endured 988 days of treatment like a true warrior, but Berg’s whole life could be seen as a battle.
“Sadly this is not Collin’s first rodeo,” says Theresa Berg, Collin’s mother, “he suffered a stroke in utero and was born with congenital hydrocephalus and hemiparetic cerebral palsy. Cancer was just another bump in the road he took on with grace.”
Berg, just 16 years old, has already overcome so many challenges, but what might be even more impressive is his positive and optimistic outlook. His mother explained that when she’s down, Collin will often be the one to fortify her with words of encouragement and remind her that they’ll get through this.
With help from the community, they did get through this, but the family also wanted to continue to pay it forward to the Valerie Treatment Center in the Goryeb Children’s Hospital at Morristown Medical Center as well. The family asked for donations of gift cards to replenish the supply that is given out to older children receiving treatment at the center. This was optional and Theresa Berg was pleased that $2,920 was collected in gift cards, cash and checks.
“The Valerie Center is an outpatient clinic that treats kids with cancer and blood disorders,” she says. “The team is made up of the most amazing and compassionate people.”
The celebration was a success thanks to the family, friends and a host of sponsors. Joe’s Pizzeria, owned by Collin’s grandfather, supplied the pizza and Sussex Meats donated the hot dogs. Anthony and Sons of Denville provided the rolls, volunteers from Sarah’s Fight Hope Foundation served food and 95.5 WPLJ provided entertainment.
Berg is a remarkable teenager and there was no shortage of praise and kind words to describe him.
“He’s brave and endured so many ups and downs and always has a positive attitude,” says Jackie Guenther, a friend from Sarah’s Fight For Hope Foundation.
“What a strong kid. I’m just so happy for him,” says Joe Byrnes, a close family friend, who fought emotion as he greeted Berg’s mother during the event.
“He’s an angel; he comes from heaven,” boasts Berg’s grandmother, Norina Faraci. “He never complains. There are no words to explain the kind of boy he is.”
“Since the day he was born, he’s been a fighter and defied all odds,” says Theresa Berg. “He takes on every challenge with a smile and determination that is really unmatched. I think he inspires people, kind of like an underdog. When he got cancer, they wanted to see the underdog win.”
After meeting Collin and upon hearing his story, it’s easy to conclude he’s both a winner and an inspiration, but he also gives new meaning to the word warrior.
The Berg Family’s drive for gift cards ended, but if people would like to help families battling cancer, they can donate to:
Sarah’s Fight for Hope Foundation; Frances Foundation; Dean Michael Clarizio Cancer Foundation; Apple a Day for Kids.