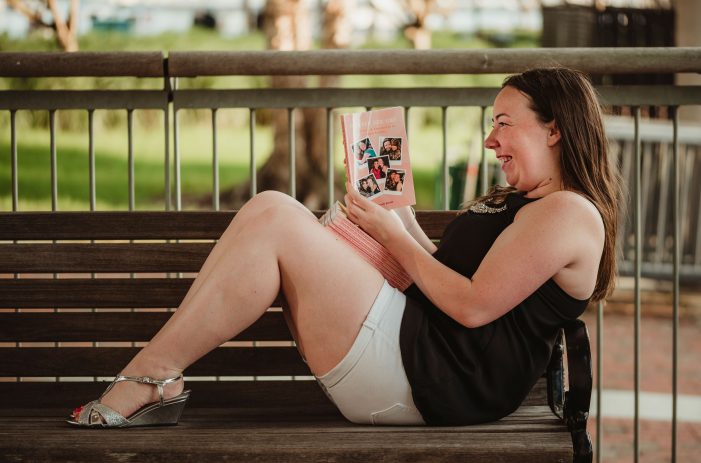 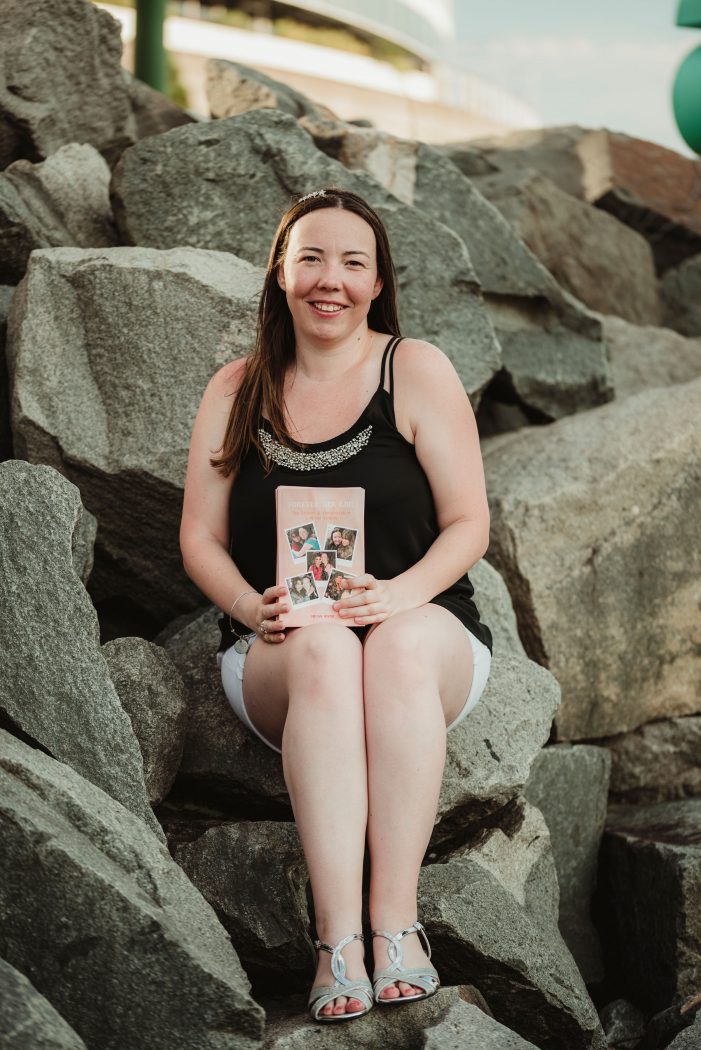 For the soon-to-be 29-year-old Megan Roche, writing her own book and seeing it published wasn’t a specific goal she wanted to attain by age 30.

But then, COVID-19 and being quarantined happened. “Being at home, I really didn’t want to sit around and do nothing; I wanted to channel my energy into something that was different,” says the 28 year old. What she now finds “crazy” is, looking back at the original outline, it was at the most 9 chapters. However, once she took off on the project, putting fingertips to computer keyboard, the number of chapters ballooned to 19. “That was pretty cool.”

What started out as a suggested, fun project by a friend became the 122-page Forever Her Girl: The Stories & Experiences of a Major Fangirl. Roche’s first full book details her discovery of, first meeting with, and subsequent close friendship with pop star singer and dancer, Paula Abdul.

Roche, in her 13 years of being an Abdul fangirl, has attended 30 of the performer’s concerts, has taken part in podcasts with Abdul, written articles about her – an iPain Magazine cover feature garnered Roche a 2019 an International Pain Foundation Hero of Hope Award – and much more.

The before mentioned speaks to the author’s eager, persevering persona, the aggressive project itself grasped by a writer who enjoys creativity and being in that mindset – in addition to avoiding the recent negativity. Roche says, “This book project was a way to escape all the negativity that was going on, all the craziness, all the news ‘of this’ and ‘of that.’” It was a way to shut everything off and focus on and write about a topic she loves and is passionate about. “I needed that escape, and I think a lot of people need that creative escape right now.” It also enabled her to keep her writing skills sharp in what for others was down time. “For me, especially during the quarantine, I didn’t want to get lazy and out of the groove of writing. I find that when I do something for a certain amount of time, and then (after a long break) I have to go back into it, it’s very, very hard.” The familiar topic, as well, was a strong seed to sow. “I was excited I got to write about a subject that is so important to me, and honestly, the feedback that I’ve gotten from people who have gotten copies of the book has been overwhelmingly positive. I’ve actually gotten messages from people I went to high school who are apologizing to me. I’m like, ‘Why are you apologizing?’ And they were apologizing for poking fun, never understanding it, and for passing judgement. I think a lot of good came out of it. People can kind of take a step back and understand me as a person. And I’m sure,” she adds with a laugh, “that the fact we’re all 10 years older now is important.”

15-year-old Megan Roche met Abdul for the first time on Monday, March 19, 2007. She and her dad endured a cold, snowy day, driving to New York City hoping to glimpse the star. Begging her dad by saying, “Dad please, I’ll do anything to go. Anything,” the words elbowed the elder Roche to take the day off, but he made no promises that the meeting would actually take place. Roche eventually received a hug from her hero, cried when Abdul penned an autograph on her Cardio Dance DVD, and digital photos were taken. “I knew after about two years of following her career that I wanted to get the opportunity to meet her, and I look back now, and I honestly thought that that one day in March was probably going to be the only time I had a shot, and the only time anybody was willing to take me – I mean, I was 15, I couldn’t drive, and my parents were like, ‘Well, you’re not going into Manhattan by yourself. You’re crazy, you’re 15-years-old’ – so it was special.”

Beyond her singing career, Abdul means more to Roche, much more. “One thing for me especially, which I touch on in the book, is for boys and girls, as a young teen, you’re very impressionable,” she says. “The only thing that matters at that age is fitting in and being accepted. One thing I’ve always respected about her and our relationship and the friendship that we have is that she’s never once made me feel like an outsider, she’s always embraced me and my antics, she’s never turned her back on me at any point. You know, you hear a lot of horror stories about when people meet their childhood idol. ‘Oh my God, they were so not what I wanted.’ I’ve always felt like Paula’s cared about me, and she has proven it through the years, time and time again.” Roche also points out that Abdul has proven that you can keep coming back from adversity. Just one or any number of failures doesn’t signal career’s end. “I think that’s so important, especially at the age that I found her, to understand that it’s okay to make mistakes, it’s okay to reinvent yourself, and you don’t have to conform to societal norms, you don’t have to do what everyone else is doing. You can be different, and I’ve always appreciated the fact that she was open and honest about that.”

For Roche, who previously contributed to Denville’s Heroes, an offering of reflections from the area’s veterans of war, working on a book project was not unchartered territory. However, compared to that initial effort, this was growth by “leaps and bounds.” “I do feel that way,” agrees Roche. “The veterans’ book was a great experience, because I got to hone my interview skills and my interpersonal skills with that. This book was more so talking about myself, and it was easy to write from the perspective that it’s a subject that I’m very passionate about, but I also had to be very choosey, because if I did put every encounter that Paula and I had ever had in that book, it would probably be about the size of a bible.” She chuckles, then continues. “It would’ve been a coffee table book, for sure.”

Roche had fun with Forever Her Girl: The Stories & Experiences of a Major Fangirl, and although she was undecided throughout whether or not to publish it, she did so, and for an important reason. “I want other fangirls who pick it up in 10 years, I want them to know they are normal and their feelings are valid. I’m very lucky that my family always understood it. They let me do my thing. There’s a lot of people who are not as fortunate, and whose parents are like, ‘Oh my God, what is mentally wrong with you? You’re crazy!’ I want them to see it’s really not like that. I’ve learned so much through the past 15 years that other people’s opinions of you don’t matter, and you should never let people tell you how to live your life.”

Roche is sure there will be another book in her future, and she hints at some details. “I’ve been contemplating writing a book for kids who are going into the world of journalism,” she explains. “I know for me, I would’ve loved to have had a kind of a handbook per se for the first two years out of college, for what to look for and what to do, and how to get started. If I can help someone else, then that would be cool, too.”

As sure as Roche is that many who read the book will learn more about her, she also states that she learned more about herself through the process. “I think one thing that I’ve learned from the feedback that I’ve gotten from other people who have read it is that I have a very loyal friend group. I have a lot of people who are in my corner, and I don’t necessarily see that sometimes. That’s one thing, and I think for me, too, I learned that I could take on something of this magnitude and put it together and put it out there. I mean, I was just impressed that I wrote 30,000 words, and I do feel like at times I rambled on a bit, but just to be able to see it and hold it was nothing short of incredible. I remember when the FedEx box came in the mail with all of them (books), and I remember bringing it up to my room and sliced it open, and I opened the box and I saw them with the shiny cover and all the pictures – it was like an overwhelming feeling of, ‘Wow! I actually accomplished this!’”

Every time she’s in New York City, Roche reflects about the first meeting with Abdul. “I walk up there, I walk past that little side door where that moment happened, and I kind of take a minute to just be grateful, because I know I have a lot of friends – a lot of international friends – who I know will probably never get a chance to do what I have done,” she says. “That date, (March 19) every year, I post about that day at the exact time I got to meet her. All of my friends poke fun at it still, but only a handful of them actually know what that feeling is like: to stand in front of a person you admire, and actually have them want to carry on a conversation with you.”

Will Paula Abdul get a copy of Forever Her Girl: The Stories & Experiences of a Major Fangirl? Absolutely, but in a special way. “I’m saving that for the next time that I see her,” says Roche. “I want to give her a copy personally, I want to be the one to actually hand it to her and explain to her what it is. This book is my gift of gratitude to her and I feel like for me that’s something very personal that I want to share with her.”

If interested in receiving a copy of Forever Her Girl: The Stories & Experiences of a Major Fangirl, Roche can be contacted at Megan.Roche13@gmail.com.