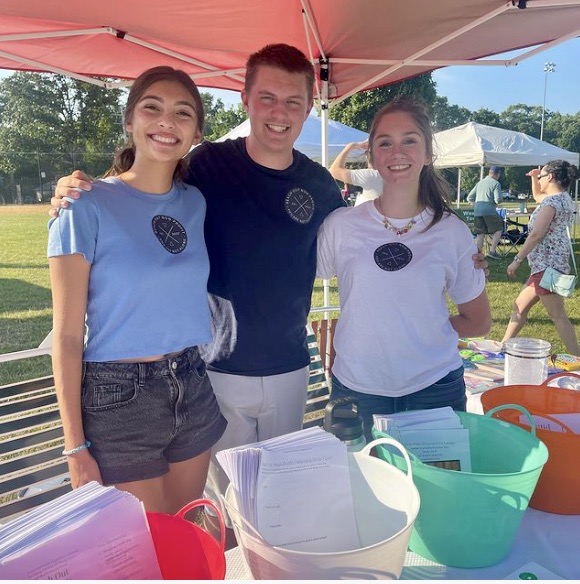 Savannah Johnson, Matt Ashburn and Veronica Flagg share the launch of their new non-profit, Reach Out at Washington Township’s Community Night Out in Rock Spring Park 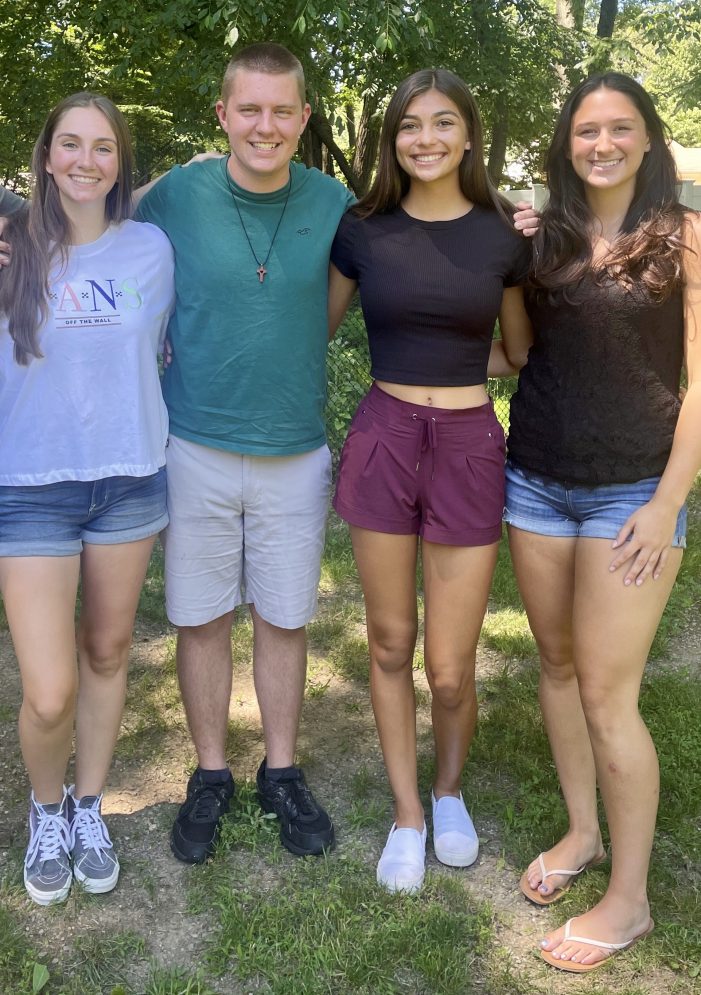 When Matt Ashburn saw the crushing teen mental health crisis facing many friends and peers — he wanted to make a difference.

“I knew I could do something to help these people struggling,” says Ashburn, who approached several friends (Savannah Johnson, Veronica Flagg, Natalia Agnolet, Sophia Vasquez) with his idea and the quintet formed Reach Out!

“We could not be prouder of the work we are doing,” he says of their non-profit. “We are a hardworking, dedicated group of individuals trying to make a change and help children and young adults struggling with their mental health.”

And their efforts couldn’t come at a better time.

According to Surgeon General Dr. Vivek Murthy, mental health challenges in children, adolescents and young adults are real and widespread. Even before the pandemic, an alarming number of young people struggled with feelings of helplessness, depression, thoughts of suicide — and rates have increased over the past decade.

“The COVID-19 pandemic further altered their experiences at home, school and in the community, and the effect on their mental health has been devastating,” said Murthy.

And the Reach Out teens have already received feedback from people saying how needed their service is and to let them know that they too would be happy to lend their assistance.

“It’s great to hear all the work you are putting in is making a difference,” the West Morris Central High School alumnus says they are often told.

According to the Reach Out founder, (the five of them — high school/college students who range in age) they are committed to this cause and it is close to their hearts because all too frequently in their daily lives they see how many are hurting, and could not sit idly by.

They say a resource like their non-profit is vital for students to turn to when they don’t want to talk about the stress they are under but want to take their mind off it and play with a stress  busting toy or color for a few minutes.

“We believe every school district needs these types of resources and to have enough for every student because at one time or another they will be stressed,” Ashburn says whether it is from an upcoming game or a test that day — everyone should have the outlet to let their stress out.

That’s why they aim to raise mental health awareness and funds towards stress relieving toys, including Pop It! Squeeze & Release POP! Pop-Pop Poppers and coloring books placed into school systems so students can de-stress.

They also hope to donate: toys, books, iPads, art supplies and streaming service subscriptions to make it easier for those recovering, as well as mental hospital donations to assist children who are admitted there.

And they would like to provide scholarships to students who struggle with mental illness to help them pay for college.

The greatest thing about this whole endeavor, according to Ashburn, is hearing people’s stories of how they fought their way through and came out the other side.

“And to hear what a difference they think (Reach Out) would have made if it was available when they were struggling,” he says now they just want to get the word out about their organization and inform others about their mission.

Reach Out is hoping to get those stress relieving toys in the schools.

“We are hoping to have a walk in the fall to raise awareness for the mental health crisis facing children and young adults,” says Ashburn, who heads to Seton Hall University come September.

His altruistic and entrepreneurial spirit has always led him to step up for others.

The West Morris Central alum works with second graders at a summer school.

“In saying this I hope to become a (school) teacher to help students with anything they might need and eventually an administrator,” Ashburn says. “Most of our board hopes to do this as well.”

He says they are a benevolent group who never hesitate when they see someone in need.

“We jump at the opportunity to answer the call and help them in any way we can,” says Ashburn, who enjoys thinking of ways to give back.