No matter which she favors, guitar or piano, Madison Pisani and her instruments are almost inseparable, and they make super music together. 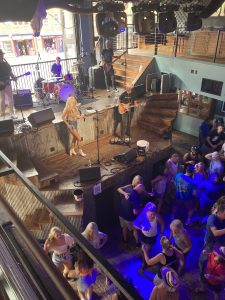 Pisani’s repertoire of songs includes popular tunes from the past as well as current, although she favors the older stuff, Stevie Nicks and Fleetwood Mac being her favorite. Her love of the 1980s music she credits to her dad, while the 1960s and 1970s tune fondness she attributes to a former teacher. “He put on a record of Fleetwood Mac and I was like ‘Wow!’ I learned it, and learned how to play ‘Landslide’ (the 1975 Fleetwood Mac single) on guitar,” she says with a laugh.

Pisani, 20, who originally is from Staten Island and moved to Mount Arlington when a teenager, attended Roxbury High School. She has been living in Nashville, Tennessee since July, and effective her arrival in “Music City” has been encouraged to and embarked on writing her own songs. “Just hearing other songwriters and musicians, you’re encouraged a lot down here to write your own music,” she says. She has also been taking part in what is known as the Nashville Writers’ Rounds. She explains. “Musicians will show up and just play their original songs and they’ll get feedback from others, and people might want to collaborate with you and work on original music together. So, I’d never done anything like that. It expands your horizons in that sense.”

Pisani, 20, started singing in a church choir at the age of 9, and her parents also enrolled her in piano lessons, which didn’t go too well because her teacher said she couldn’t read music. So, she did vocals at the recital instead, and eventually learned piano by watching tutorials on YouTube. “Guitar, too, I learned on You Tube,” she says. “Honestly I think I’m better at piano than the guitar – if I were to pick.”

Pisani began doing random gigs in Staten Island for live audiences at the age of 13, but her first regular gig would come when she was 16. It was a challenging time for her. “I didn’t feel like I belonged in Roxbury at all; didn’t feel like a part of it at all, I guess, being the new girl,” she recalls. Rescue came in the form of a benefit show. “There was this boy who had leukemia in Mount Arlington, and we did an event for him,” she says. The scheduled band had pulled out at the last minute, and the event organizer called and asked Pisani to take the stage. “I said, ‘I don’t really know a lot of songs but I’ll try my best.’ So, I showed up with a binder of music and lyrics, and I plugged in the little amp that I had, and my guitar and microphone, and I sang.” It was a case of being in the right place at the right time. Legends Ale House on

Route 10 was catering the event. “During my break, I went over to get food and they handed me their business cards and they’re like, ‘We’d love for you to perform at the restaurant.’ I was so happy and excited, and I got my first gig out of that basically.” It was huge for her, professionally and personally. “People saw me now as a mature singer and mature musician. I kind of felt accepted in that sense, even though I didn’t really feel that way at all in high school or anything else, but I felt that way with my music. And it gave me confidence.”

That confidence is evident every time she elates others by either transporting them back in time by singing songs from the past, or presenting current hits, all in her own unique style.

And Pisani – whose favorite spot to perform in Nashville is Kid Rock’s Big A** Honky Tonk & Rock ‘N” Roll Steakhouse, while outdoors at Patrick’s Pub in Lake Hopatcong is a favorite when she occasionally lands back in the Garden State – has a five-year timeline for her future goals, which are to record an album of her own original songs and music, and tour with her own band.

For more information about Madison Pisani and to listen to some of her music, visit www.madisonpisani.com.