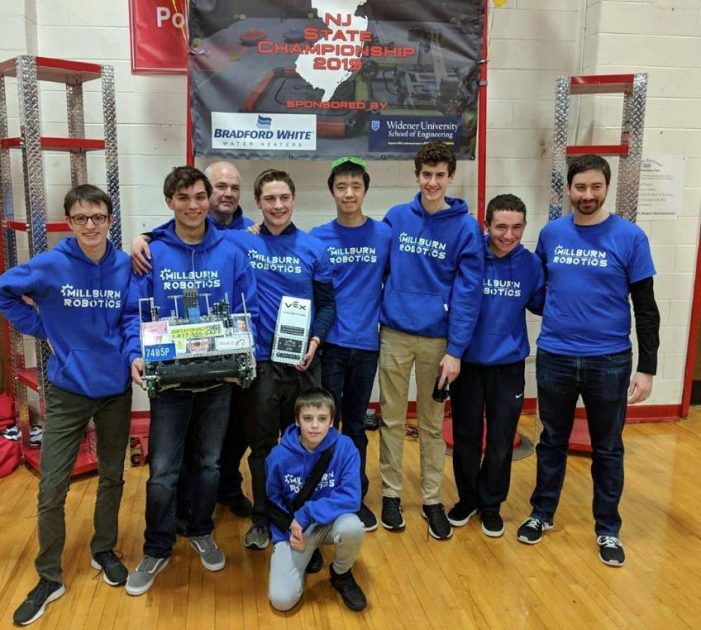 Millburn ousted the rest of the competition in the VEX Robotics Championship High School – Science Division and captured a world championship, becoming the first Garden State team to ever to do.

Hilton Seibert, Robotics and Architecture teacher in the Technology Department, is in his first year at Millburn High School, 6th year as a robotics coach, and 11th year as an educator. He is co-head of the program, while David Farrell is the other half.

“I graduated from Millburn in 2003,” says Seibert, “and I was lucky enough to have him (Farrell) as a teacher when I was a student. To be working with him now is an incredible honor.”

Seibert explains the team’s season, their initial path to the World Championship. “Millburn Phreak Show competed in six regular season events before the state event. Each event has three main phases. The first is a skills portion, where an individual robot has a minute to score as many points as possible. The second is a qualification round, where teams are randomly assigned another team as a partner. At the end of the qualification round, teams will have competed in at least five matches with random partners against random opponents. The top performing teams are seeded into a bracket for the third and final phase, the elimination tournament. Phreak Show took 1st place in each elimination tournament leading up to the state event.”

Preparation for all activity is key, and most of it takes place in a very special spot. “The MILL (Millburn Innovative Learning Lab) is home to many exciting learning opportunities,” says Seibert, “one of which happens to be Robotics. The students are making incredible use of the space, and their successes this season are due in part to the MILL.”

“Millburn Robotics has been around for close to eight years,” says Seibert, explaining the history and critical parts of the program. “Robotics is an all-encompassing STEM activity that combines math, physics, design, engineering, critical thinking, teamwork, and leadership skills. Competitive robotics is finally breaking through into the mainstream, and Millburn Robotics strives to be on the cutting edge.”

In addition to Millburn Phreak Show, the school has two other Robotics teams, Millburn Mercury and Millburn Nitro. “Mercury and Nitro also had their share of tournament wins and skills champion titles. Mercury just barely missed out on qualifying for Worlds,” adds Seibert. “Our current roster of competitive robotics teams includes VEX (this is the competition in which we are travelling to Louisville), FTC (First Tech Challenge), and the Panasonic Creative Design Challenge. The MILL is also home to a successful Rocketry team competing in TARC (Team America Rocketry Challenge).”

Millburn Phreak Show qualified for the World Championship by having one of the highest skills scores not only in the state, but also the world. Millburn Phreak Show’s skills ranking is currently 46th in the world out of 4,546 high school teams. More information about the rankings is available at www.robotevents.com.

The program continues to grow, and Seibert sees that as an opportunity to take on more. “Millburn Robotics is growing in size each year, and to keep up with the demand, we plan on participating in as many robotics competitions as possible. We are looking into drone building and racing as possible next steps.”

Seibert also says the Robotics teams welcomes donations “Travelling to Worlds was an expensive endeavor, and any donations to help bring the future cost down are extremely appreciated.” Visit www.rebrand.ly/mhsrobotics to learn more about donating.