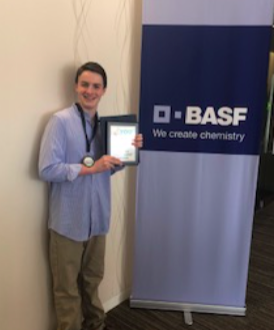 A seventh grader from the Morris School District has been chosen to represent New Jersey at a national chemistry competition in Washington, D.C.

Gavin Varneckas, a student at Frelinghuysen Middle School, will compete in June at the “You Be the Chemist” contest, a three-day event sponsored by the Chemical Educational Foundation, a national non-profit organization dedicated to inspiring K-8 students to pursue science-related learning and careers.

The annual competition aims to encourage students in grades five through eight to continue their interest in chemistry, as well as bring together industry professionals, educators and community members to celebrate students who excel in science and inspire them to pursue careers in (STEM) Science, Technology, Engineering & Math.

In order to make it to the national challenge, students must advance through a series of competitions, beginning at their school and culminating at the Washington, D.C. contest. During the contests, students compete individually by answering multiple-choice questions focused on chemistry.

At the Frelinghuysen Middle School competition in March, nine students qualified for the Morris County competition. At the countywide event, Varneckas and his classmate Anna Hong were among the top scorers, moving onto the state competition on April 13.

There, Varneckas earned the highest score in all of New Jersey and now has his sights set on the national stage.

At the competition in Washington, D.C., state champions from across the country will earn national recognition and compete for college scholarship money.

Varneckas said, “I’m really excited and honored to have won the state competition. I really worked hard for it. Every time they announced my name as a person moving onto the next round I nearly jumped for joy.”

“I really love science and math. I find competitions fun and interesting,” he said. “It’s a fun way to gain knowledge.”

Brian Young, the district’s supervisor of PreK-12 STEM, said students have many opportunities both inside and outside of the classroom with STEM-related lessons that emphasize investigation, experimentation, critical thinking, problem solving and real-world application.

In the district, students become acquainted with STEM at a young age and are able to continue with it through high school, where teens can participate in the STEM Academy.

At the middle school level, offering a range of STEM electives has been a priority for the district. Just a few of the electives include: computer science, engineering, industrial wood design and integrated robotics.

There’s also an after-school STEM club, which encourages students to participate in community projects and competitions, as well as chapters of the National Society for Black Engineers and Technology Student Association. And, beginning in the 2019-20 school year, an elective in app creation will be added.