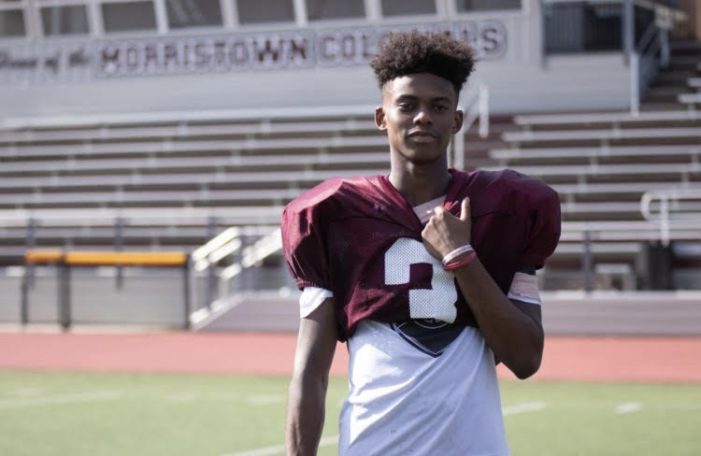 The award is bestowed upon a student who demonstrates outstanding leadership, scholarship and community commitment.

Jordan is an honors student who completed four advanced placement classes in his junior year and is taking two more this year.

As a selected captain of the MHS football team, most of his time is dedicated to football practice and games in the fall, but Jordan is also involved in many school clubs as well as community organizations.

In the community he’s involved with EMBODI and Carrettes. EMBODI is comprised of teenage men preparing to enter college. They go on field trips to learn what post high school life will be like. Carrettes is comprised of juniors in high school and it helps raise money for scholarships.

Jordan has demonstrated impressive leadership skills as one of the selected captains for the football team and in guiding Freshmen through their first few months of school in the Peer Group Connection program. He mentioned that he enjoys, “helping to lead Freshmen down the right path during their high school years.”

Jordan said that receiving the coveted NSHSS award was an honor and that it “has only pushed me to work even harder on my academics. It has shown me that I have what it takes to be one of the great leaders of my generation, but it comes with hard work and dedication.”

Jordan is currently researching colleges and doesn’t have any favorites yet. He wants to attend a school in a southern state.

As for his future vocation, Jordan plans to study business but would also like to incorporate sports in his career.

When he isn’t on the football field, studying, or participating in extra curricular and community activities, Jordan enjoys “spending time with his friends—usually having a meal or hanging out at someone’s house.”

The NSHSS was co-founded by the great-nephew of Alfred Nobel, founder of the Nobel Prize. According to NSHSS, this honor was inspired by “the mission of the Nobel Prize to support academic and world betterment” and has been connecting members with “scholarships, college fairs, internships and career and leadership opportunities and more” since 2002.

Being chosen by NSHSS is a distinguished honor. Students qualify for the award if they score very well on standardized tests and maintain a high grade point average, including a high score in an AP class.

Jordan’s commitment to studying, playing football, and participating in leadership activities. school clubs and community organizations have earned him the esteemed NSHSS award. That award will be a great help to him when he applies to colleges and universities in the upcoming months.