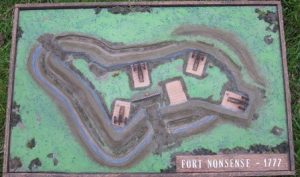 Fort Nonsense, a unit of Morristown National Historical Park, is “an important location connected to George Washington’s 1777 and 1779-80 Continental Army winter encampments in Morristown and offers a commanding view over the town and landscape beyond,” according to Morristown NHP Superintendent Tom Ross.

In addition, work on the outline of the fort and signage and kiosk repair has been completed with financial support from the Washington Association of New Jersey.  Belgian Block Stones were installed as part of a major site and interpretive panel rehab project in 1989/90 to outline the Fort as it was confirmed by archaeology.  Over time, blocks have become obscured.  These have now been reset to present a clear sense of the Fort’s boundaries.  These projects represent the continuation of work done by the Morristown NHP with support from the Washington Association over many years thanks to the Woodruff Endowment Fund for Fort Nonsense.

The event also commemorates the celebrations at the end of the Revolutionary War when the beacon sites, including Fort Nonsense, were lighted.  The beacons were part of a communications network in Revolutionary times.

The entrance to Fort Nonsense is located at the intersection of Ann and Chestnut Streets in Morristown.  The hilltop presents an impressive view of the town and surrounding countryside just in time for the fall foliage.  Those attending the ceremony on October 23rd are encouraged to wear masks and observe social distancing.