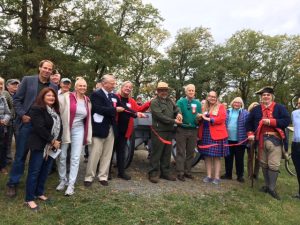 On October 23, Morristown National Historical Park (NHP) and the Washington Association of New Jersey (WANJ) celebrated the completion of several major projects at Fort Nonsense with a rededication and ribbon cutting. The WANJ is the park’s primary philanthropic partner which has supported the park since its establishment in 1933.  “The Fort Nonsense area is an important location connected to George Washington’s 1777 and 1779-80 Continental Army winter encampments in Morristown and offers a commanding view over the town and landscape beyond,” noted Morristown NHP Superintendent Tom Ross. “We are very appreciative of our partnership with the Washington Association and pleased that with their ongoing assistance and dedication in supporting the enhancement of this site for current and future generations.”  The Fort Nonsense Area had been closed for approximately three months from June to September 2021 to allow for the completion of Morristown NHP’s $1.4 million roadway reconstruction and safety improvement project. The work included reconstructing the roadway and parking area, replacing three drainage culverts, installation of new pavement, complete replacement of the roadway’s timber guardrail, relocation and replacement of metal roadway gates, new pavement striping, and new traffic control signage. This project was funded by the Federal Lands Highway Program.   Additionally, through financial support from the Washington Association, the Belgian block outline of the fort was reset, and the site’s information kiosk’s roof and sign were redone.  In 1989-90 Belgian block stones were set in the ground to outline the fort’s historic footprint, as confirmed by archaeology. Over time the blocks became obscured by soil and grass overgrowth. The Belgian blocks are now reset and once again present a clear sense of the fort’s boundaries.   The information kiosk located next to the parking area was constructed by park staff in the early 1990s and its cedar shingle roof was at the end of its useful life. Through this project the roof was replaced, and a new wooden “Fort Nonsense” sign was created to hang from the front of the kiosk. These projects are part of work accomplished for Morristown NHP through continued financial support from the WANJ-managed Woodruff Endowment Fund established for the enhancement and maintenance of the Fort Nonsense Area.  The event included remarks from WANJ board member Ryan Dawson, Morristown NHP Superintendent Thomas Ross, Morristown Council President Stefan Armington, and Chris Williams, Senior Constituent Services Representative & Grants Manager from Congresswoman Mikie Sherrill’s (NJ-11) office. Washington Association board member and park volunteer Steve Santucci also gave an informative talk about the history of Fort Nonsense, explaining that the creation of the fort was not “nonsense” (that is, “busy work” for the soldiers) but to protect the valuable supplies in Morristown’s military workshops and storehouses during the American Revolution. Morris County Commissioner John Krickus presented proclamations for the occasion. Morristown Councilwoman Sandi Mayer and members of the American Legion Post 59 were also in attendance.

For more information about Morristown NHP, please visit the website at www.nps.gov/morr.

For more about the Washington Association of New Jersey, go to www.wanj.org .