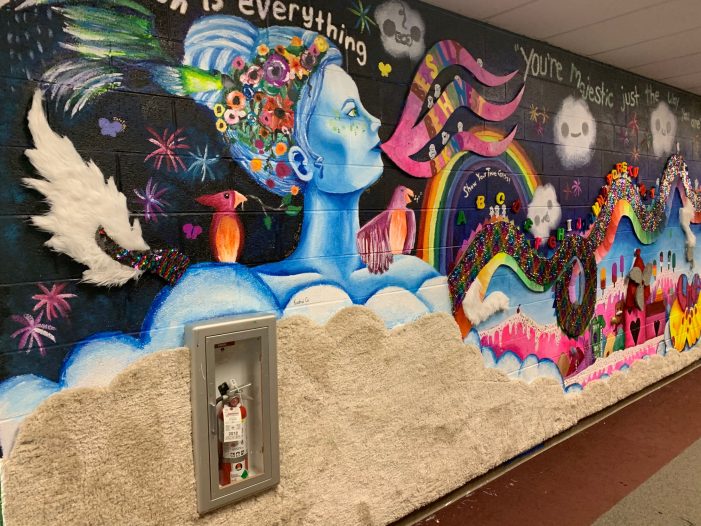 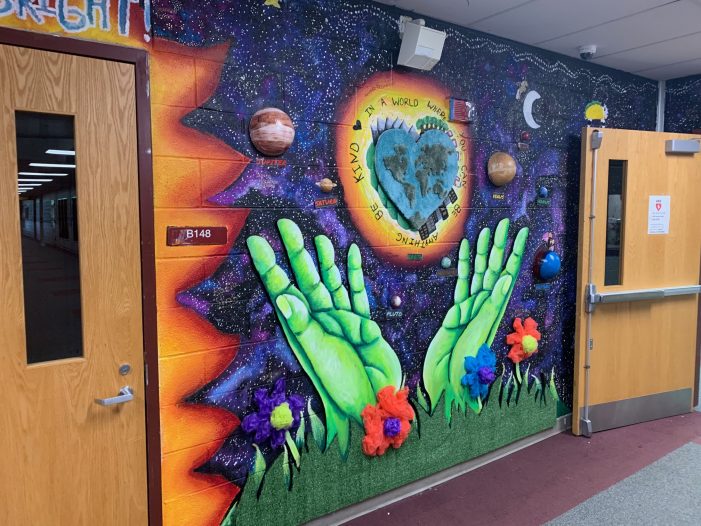 In the corridor near the nurse’s office of Mt. Olive Middle School, there stretches out a breathtaking and immense wall mural called a Sensory Wall. The latest project–courtesy of the creative efforts of the art department–not only brings art to life, it also creates a magical world for all.  It transforms an ordinary school corridor into glorious colors and images. The theme celebrates “The World of Love.”

At its best, art tempts imagination and engages the senses. Its appeal is universal. With Mt. Olive’s Sensory Wall, these dedicated and talented artists prove that art isn’t just exclusively a visual medium any longer.

For the past four months, Mt. Olive Middle School’s Art Teacher, Melissa Silvestri and various students, have been excitedly constructing the mural.

To their delight, they finished before their deadline of the last day of school.

For students, especially those with disabilities, Mt. Olive’s new mural is awesome. 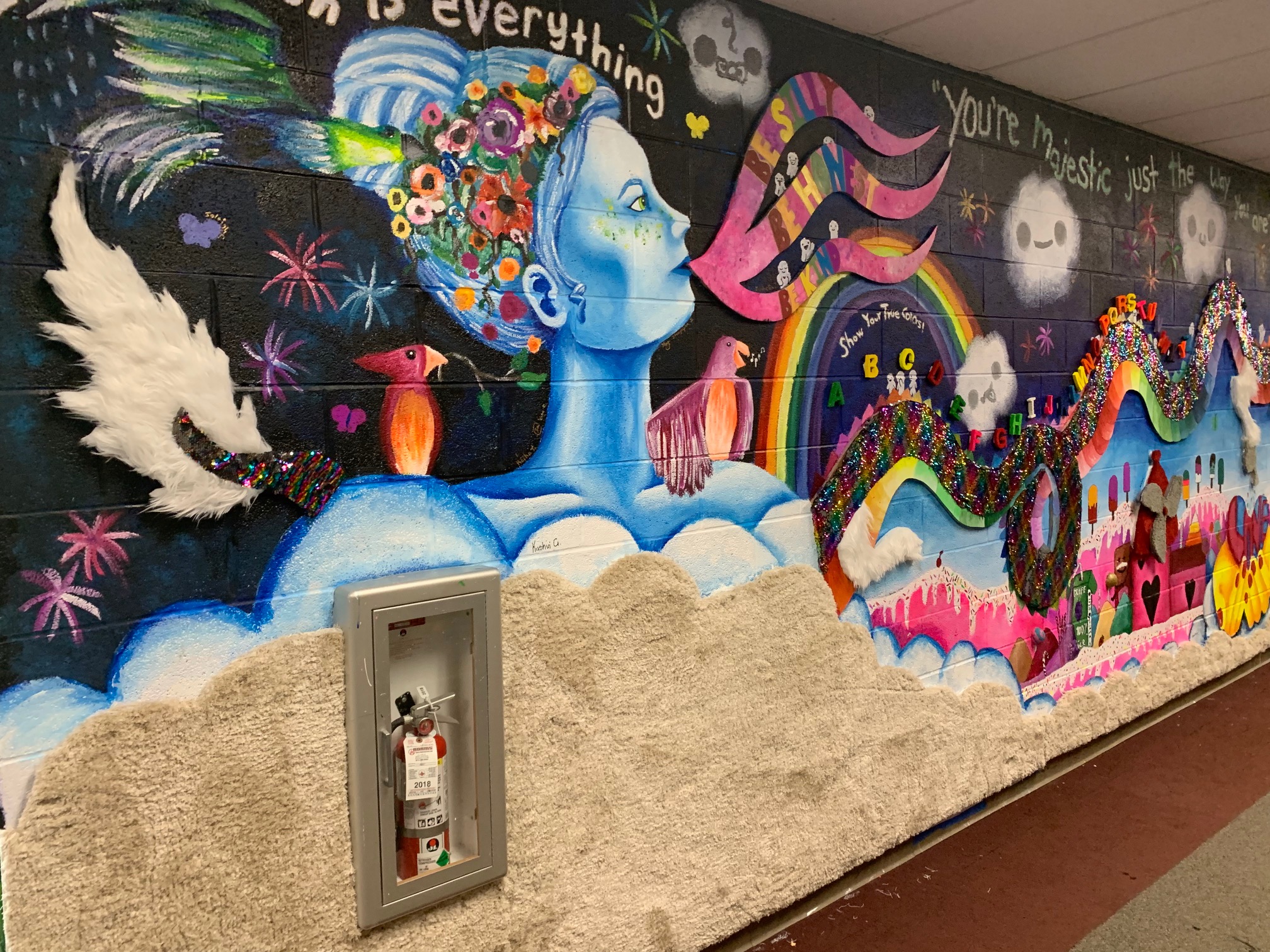 Sensory Walls in schools may be far from the norm, but they are extremely important. They are not just a respite from the everyday, or a place to decompress, they are additionally a great learning tool. Since many special needs children (such as those suffering from autism and other conditions) are sensory inclined, a sensory wall combines a range of stimuli to help pique many of their senses. According to Silvestri, this particular mural focuses mostly on tactile efforts to involve children and to practice fine motor skills.

In a very real sense, a mural such as “The World of Love” aids children into using more than one of their senses to booster learning potential.

“We wanted to engage the special needs students in learning, to make them a part of things at school, to make them feel included,” Silvestri says.

This bright, vibrant, and colorful world spans approximately 70 to 80 feet near the wing for the special education classes. “There’s so much to see,” enthuses Silvestri. “It’s huge.”

Gracing the corridor are images of buildings, a dragon, a train, the sun, clouds, planets, animals, and so much more.  Then there are the things people wouldn’t normally expect from a painted mural: There’s a myriad of interactive games, tactile elements, and more. It is designed not just for people to admire, but for people to touch, explore, and enjoy.

“It’s almost like you are not in school at all,” quips Silvestri.

As the classic motto asserts: ‘In a world where you can be anything, be kind,’ Mt. Olive Middle School’s Sensory Wall is evidence of that. “The World of Love” is a world of inclusion, of positivity, of images and messages that are uplifting and inspiring. The messages focus on love, compassion, unity, kindness, no discrimination, and all of the ideals that people are metaphorically starving for in today’s society.

The sensory wall mural leaps out at all who pass by it. Reducing stress and making people smile is one of the things about the wall that people instantly gravitate to.

Teaching at Mt. Olive for approximately three years, Silvestri is passionate about art, painting, and murals themselves. (Silvestri and students created a wall mural for Mt. Olive last year showcasing art history in all forms all over the world.) Teaching students in grades six, seventh and eighth, as well as gifted and talented students, art is in her life’s blood. “I’ve had a passion for art since I was a kid,” she shares.

The same could be said for her teaching. “Art is a wonderful way to explore self-expression,” Silvestri asserts. “Art ties into everything.” 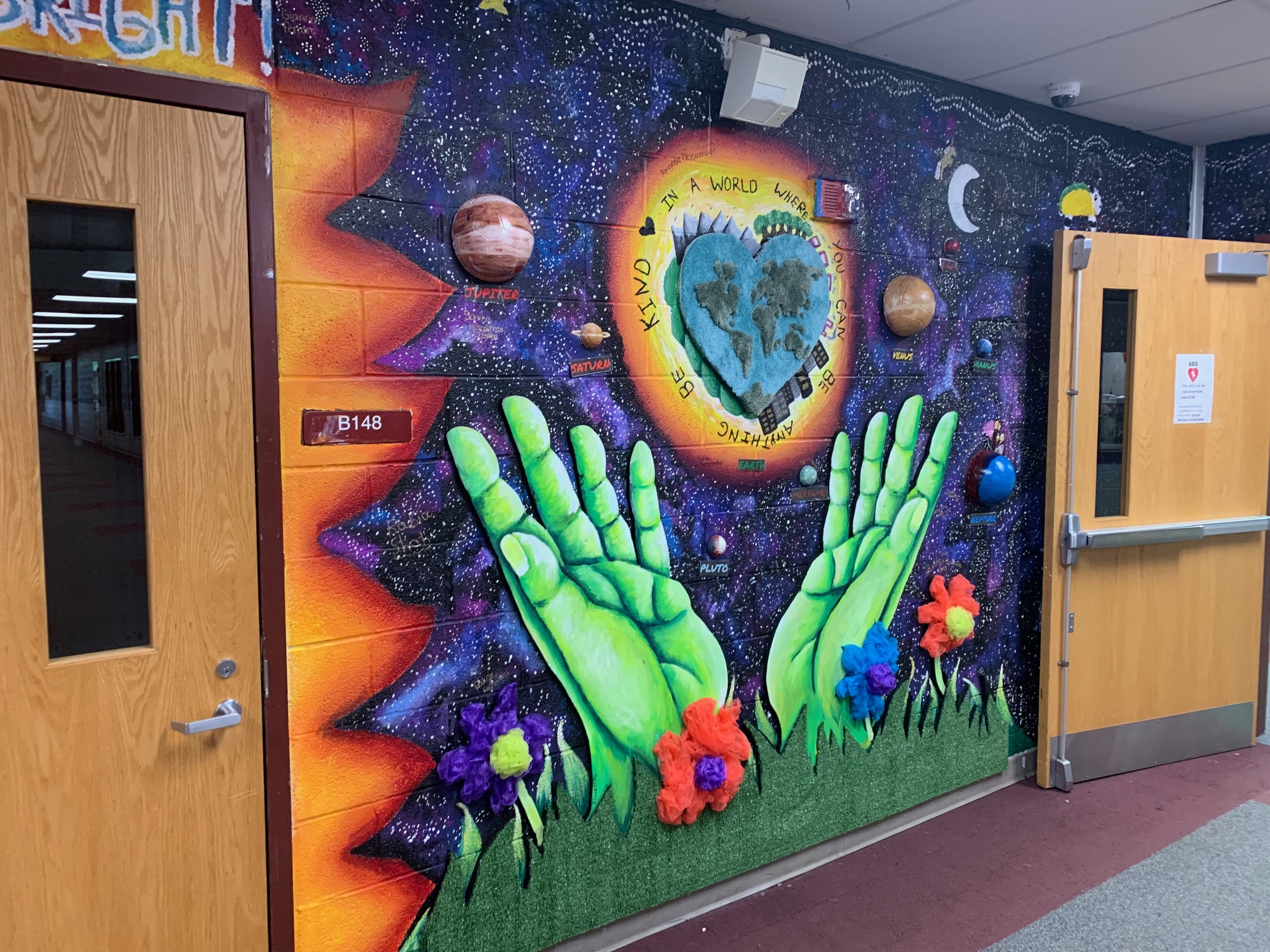 effort,” and was an exciting prospect for her. “So many people approached me about doing a sensory mural, including vice principals Nicholas Cutro and Christopher Reegan, as well as former principal Susan Breton,” Silvestri tells.

After speaking with Mt. Olive Special Education Teacher, Michelle Corazza, regarding the sensory details of the mural, Silvestri and the students buckled down to work. It was then that they let their imaginations spin and their ideas and talents fly.

Brainstorming all the way back in December,  the students were as excited as Silvestri regarding the project. “They drew their own designs, and I incorporated all of their ideas in it,” she shares.  Silvestri mentions that it wasn’t just her students that helped create the sensory wall either. Many students in the school were thrilled to participate. “Approximately 67 to 70 or more kids helped. They spent a great deal of time on it, including after school and their free time. They are a great group of kids,” she prides.

Creating a magical world, from dragons to Candyland, to solar system planets, and more, the wall is a mixture of painted images and receptive input. “It is almost an alternate universe,” Silvestri asserts. “It’s a happy place.”

Working with carpenters, the sensory wall has an eight-foot-long dragon with plywood screwed on to the wall for its tangibility, creating a multilayered effect. The dragon’s scales are made of a reversible sequined fabric, while the body is fake fur.

Above it, there’s velcro and letters made out of sponges, so students can make words and sentences with them.

Moving on to the out-of-this-world galaxy, the visual of hands cradling the bottom of it is a must-see. There’s fake grass to touch, and planets are formed from various shaped balls. Students can then velcro them to learn about the solar system.

“The train is a wonderful vehicle for children who have trouble communicating,” Silvestri explains. “They can utilize the faces of the people on the train to show their feelings.”

The sensory wall includes a chalkboard behind a door, an abacus, a xylophone where children can make music, interactive games such as a magnetic maze, a beanbag toss, and even Legos.

Even students from Maker’s Space and STEAM (Science, Technology, Engineering, Arts and Mathematics) put their marks on the sensory wall by creating working plastic gears made from 3D printers on another part of the mural.

The finished result was a resounding success. Everyone, including the special needs students, was elated.

For Silvestri, the most magical part of the sensory wall might have been the making of it, and the effect it had on the students.  “It was so much fun!” she shares. “The kids worked super hard on it and loved every second. These 12, 13, and 14-year-old kids were involved in making a mural for such a positive cause. They wanted to help create something that would help others and make a positive difference in their lives. It blew my mind that they all pulled this off. It’s amazing.”