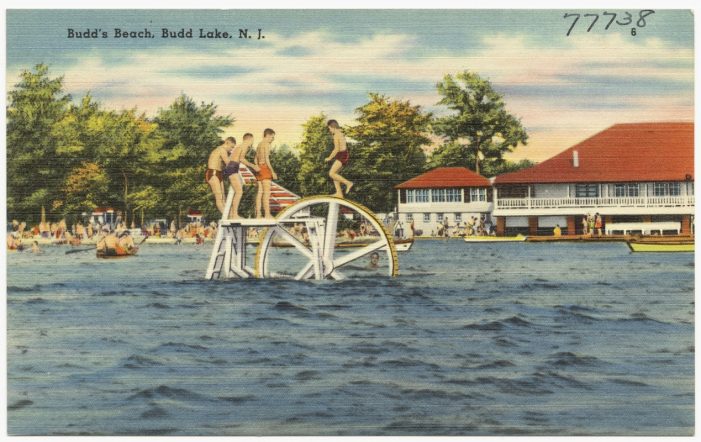 This post card advertises the fun teenagers can have on the water wheel on Budd Lake. (Credit Mount Olive Township) 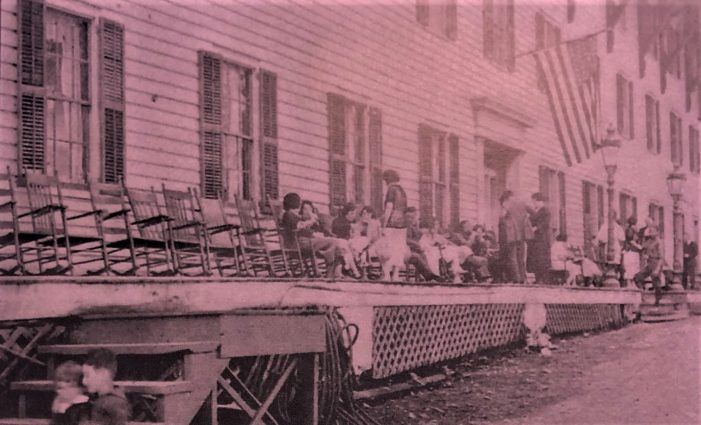 This scene on the Forest House porch will probably never be repeated as today’s society is action-oriented and does not have time for lounging afternoons on the porch. The Forest House fell into disrepair and was razed in the 1920s, rather than repair it. (Credit Mount Olive Township) 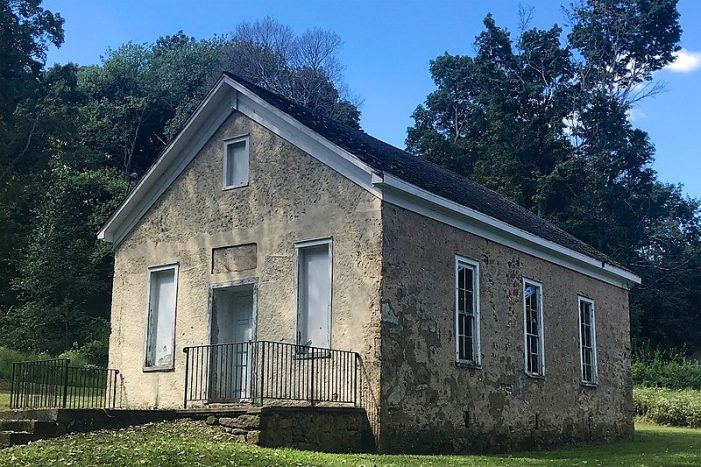 Mount Olive, like many municipalities in the Highlands region, has a history of farming and mining. Some active farmlands may still be found today. Iron mining was a focus in the 19th century, with two mining belts running through the north and center of the township where glacial deposits are found.

Millions of years ago, a great tectonic shift raised the flat featureless surface (peneplain) of Mount Olive above sea level, and left the surface covered with coastal sediment and rocks exposed to the winds of the ecosystem.

The historic and economic development of the township was drastically influenced by several periods of glaciation that occurred. The area had formed slowly over several ice ages. The thousand-foot-thick sheets of ice embedded with rocks and sediment had melted away, leaving deposits of terminal moraine marking the maximum advance of the glaciers.

The ice and water from the glaciers carved mountains up to 2,000 feet, lush valleys and re-deposited the soil. The glaciers created a northern section replete with rich deposits of iron ore that would eventually lead to an iron mining industry. The south, however, was flat with fertile soil and gentle rolling hills, eventually spawning the agricultural industry.

The greatest sculpting of the area was created by the Wisconsin Glacier. The grinding force of this glacier left the region buried in massive boulders to fine sand. Even the impenetrable parent rock was cut by the overwhelming strength of the glaciers.

The wetlands of Budd Lake Bog act as a sponge, collecting large supplies of water that are slowly released throughout the year.

The first inhabitants of Mount Olive Township were the peaceful Native American Leni-Lenape people.  The natural features of streams, woodlands, fertile fields, and marshlands provided food and shelter for a people who lived by hunting, fishing and farming.

The Township of Mount Olive is named after Benjamin Olive, a local landowner, and a colonial-era Lieutenant Governor of New Jersey who donated land for the site of several churches built.

Mount Olive consists of two unincorporated sections: Flanders, and Budd Lake. It has 374 acres, and is named for John Budd, who acquired 1,300 acres of land in 1714, from the King of England.

The town of Mount Olive is located on the peak of Schooley’s Mountain and was originally called Rattletown. In

1855, the settlers built the Mount Olive Baptist Church, which is still standing, as well as the first school in the community, the Mount Olive Academy, built in 1837, and also still standing. The school is closed and there is an empty piece of land between them that was the Presbyterian Church and graveyard. According to Thea Dunkle, Township historian, “The two buildings and the empty lot between them are pending National Historic Landmark status. The Presbyterian Church burned to the ground after the paperwork was submitted and will be included in the consideration.”

With many streams, the area was rich in waterpower. Grist and sawmills, distilleries, tanneries and creameries grew abundantly.

As Mount Olive developed, local water companies moved in to serve certain areas, for example, Flanders Water Company, and others. Sanitary facilities went to cesspools and then to septic tanks.

With the completion of Interstate Route 80, in the 1970s, the year-round status of the community became even more permanent. By 1980 there were 18,748 permanent residents in Mount Olive.

The various areas of Budd Lake, Flanders, Mount Olive, and other villages have their separate, yet interrelated histories starting in the 1700s.

Flanders is an unincorporated community first settled in the early 1700s, was the largest village in the township. The village grew up around the Methodist Church, and later the Presbyterian Church. It was a convenient stop for travelers and merchants on the old road from German Valley (now Long Valley) to Succasunna.

Flanders, was named for a group of early settlers who vacationed in Flanders, the present-day South Hampton, on Long Island, N.Y.  Roads in the Township are named after early settlers such as: Smith, Drake, Bartley, and Waterloo.

“In the 1700s, the Smith and Batson families established early farms in the area that became Smithtown.” According to Dunkel, these families and other early settlers intermarried.

Waterloo, which had served as a French Army Officer’s hospital in 1740, by 1831, was an important lock and incline plane stop on the Morris Canal.

The Morris Canal (1829–1924) was a 107-mile canal across northern New Jersey, cutting through Morris County. The canal was built to transport Pennsylvania coal to markets in New Jersey and New York.

Miners in the hilly northern portion and farmers in the fertile fields of the southern part of the community all needed transportation to move their goods.

In the summer of 1850, Budd Lake began as a resort area attracting people as far away is New York and Philadelphia. As the area grew as a resort, a community developed along Sand Shore Road and Netcong Road.  The influx of people created the need for some large hotels and boardinghouses.

In the late 1860s, with the railroad connection, Flanders grew to a sizable village. Products from the iron mines and foundries, the mills, farms and sand quarries were shipped through the village. Flanders had a creamery with the first pasteurizing plant in New Jersey, several mills, a post office and several general stores.

In 1885, veterinary Dr. Daniel Salmon, of Mount Olive, isolated the group of bacteria that cause the disease known as Salmonella (named after the Doctor).

John L Boyce owned a private landing strip, which was licensed as a “private aviation facility,” (later called Flanders Valley Airport). He hoped to make it into an airport which would cater to the needs of the business and executive flying industry and would include a probable operation of an air taxi and charter service, and include airplane servicing and fuel facilities.

Boyce, as a pilot in the Army Air Forces during World War II, and with 40 years as a pilot, he felt able to handle such a venture.

The field he planned would need 38-acres in Roxbury Township, and in Mount Olive, but both were zoned for residential with minimum of one-acre lots. A variance was needed, and after months of debate his dream became a reality.

Flanders Valley Airport appears to have begun construction in 1957 when an aerial photo shows a long cut (for a runway) between two tree lines. It closed in 1984 and was replaced with homes. All that remains to hint that an airport ever existed are a few street signs designating Earhart Dr., and Lindbergh Lane.

Over the past 150 years, the historic and economic development of the township grew via major roads yet, many of the through routes in Mount Olive Township are still rural in nature.