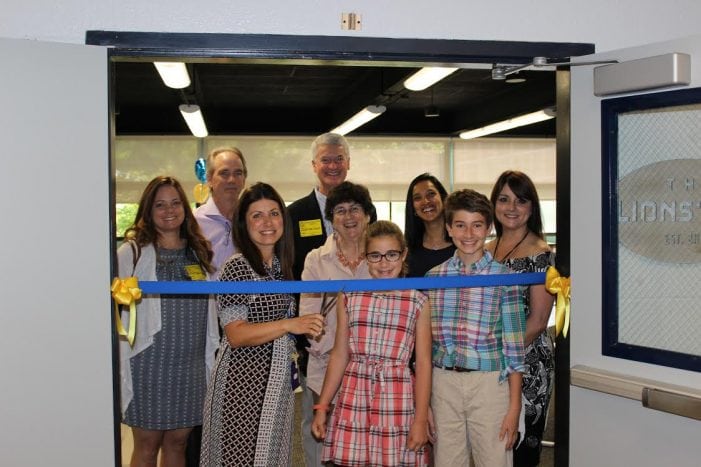 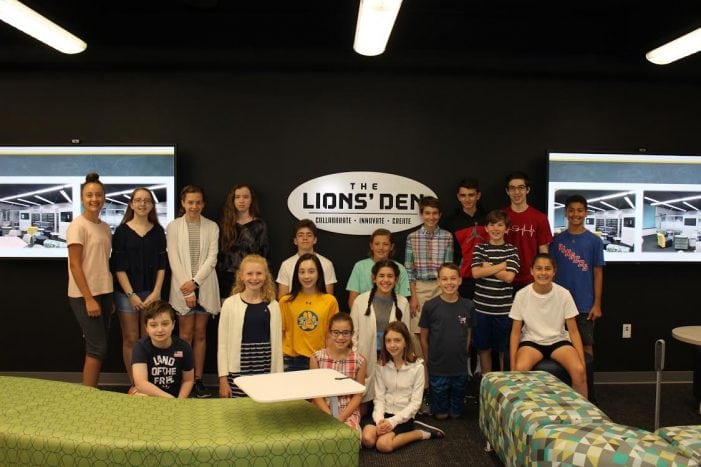 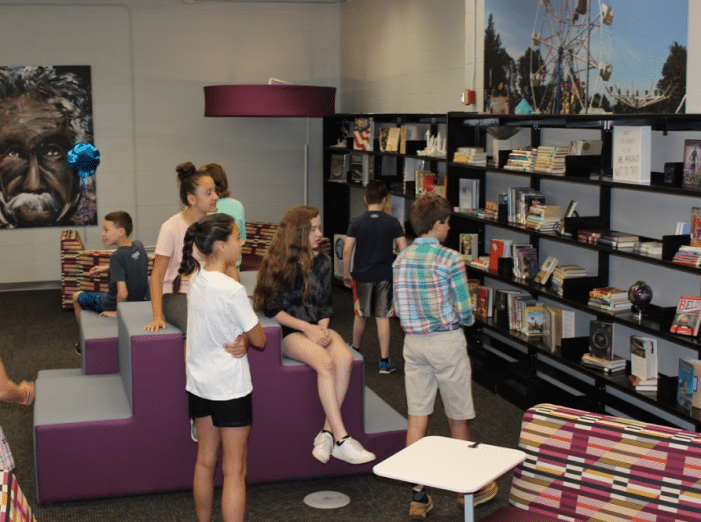 After a year since discussions began, a new media center at Mountain View School has been unveiled for teachers and students to enjoy. 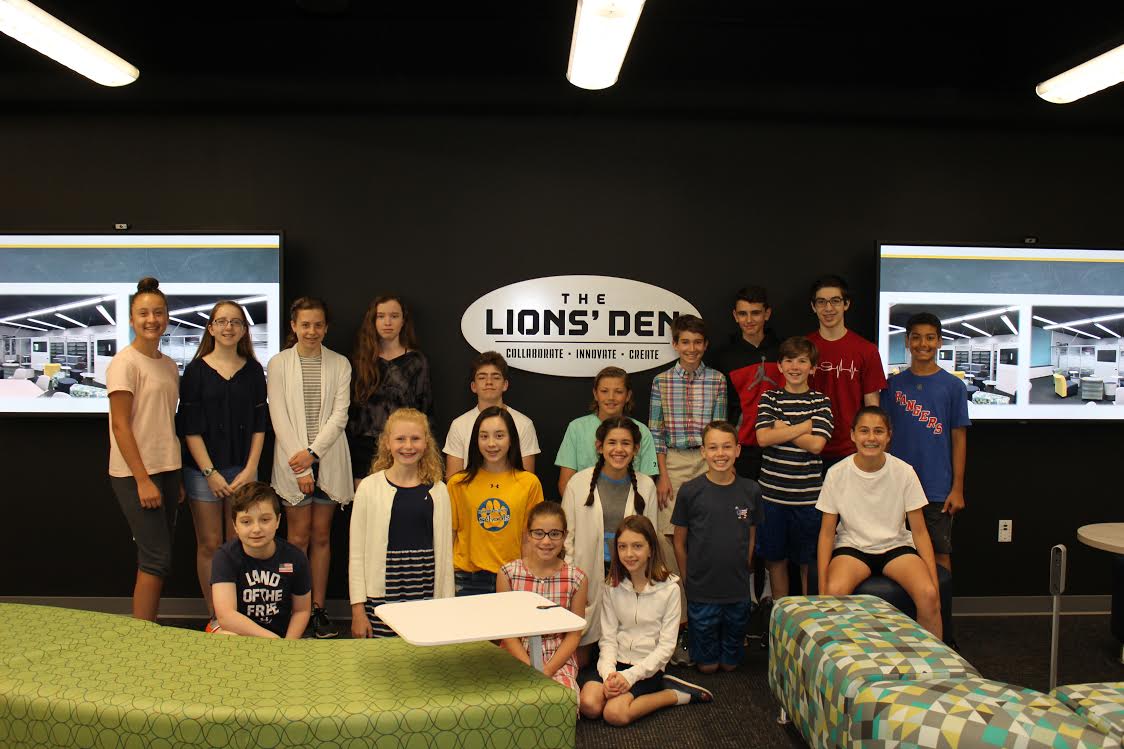 “The Lions’ Den/Reading Nook is the only space of its kind at the middle school level to date,” says Toth.

What Toth is referring to is the school’s new Media Center, which was unveiled on June 8. It is divided into two spaces: The Lions’ Den, a collaborative workspace; and the Reading Nook, a cozy space complete with soft seating and fiction/nonfiction titles selected by students.

“​Prior to the new space, Mountain View had a traditional library/media center, which contained a book collection, desktop computers, and tables/chairs,” says Toth. “The space was underutilized, and circulation data further showed the lack of enthusiasm for the space.  In addition, the way in which students access novels and nonfiction titles has changed over the years, with teacher classroom libraries being the primary source for students.”​

​Discussions regarding the new center began in early 2017. In addition to Toth, Technology Coordinator Mary Joy Falcone, School Superintendent Dr. Mitzi Morillo, Business Administrator Jim Rollo, and Operations and Maintenance Supervisor Jon Gesell, were part of the discussion. However, as planning progressed, a committee was formed that included several teachers representing different school departments.  Eventually, Dancker, a Somerville-based company that specializes in collaborative work spaces, partnered with the school to make the new media center happen. The plan was then presented to the Board of Education Finance, Facilities, and Technology Committee. “Originally, the project was intended to be completed over three years, but thanks to the support of the Board of Education, the completion timeline was reduced to the 2017-2018 school year,” adds Toth. 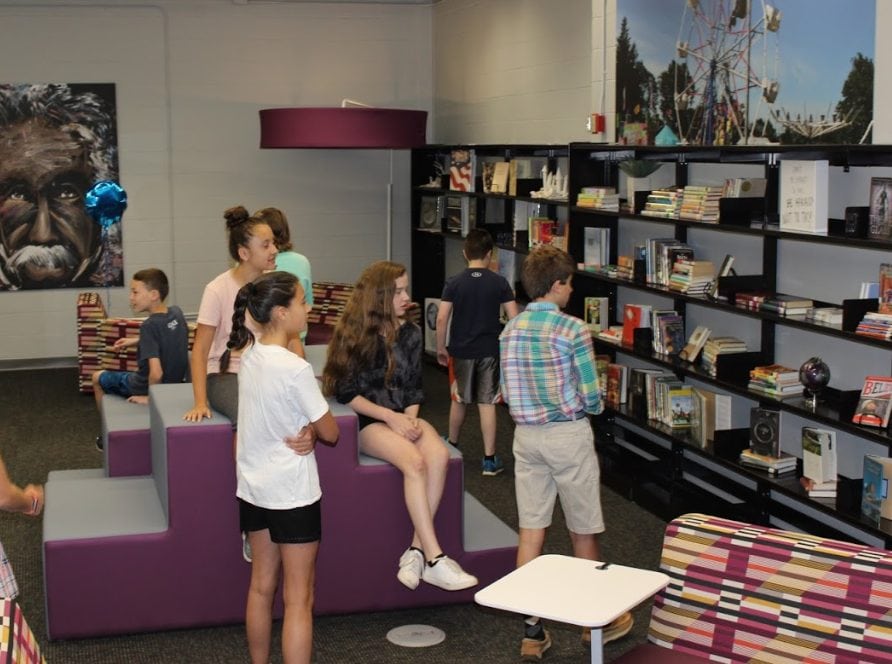 Also, not only was time saved, but money. Because the district opted not to use an architect, repurposed furniture, and received generous support from the Home School Association to fund the purchase of new books and a mural, the project budgeted at $211K came in under budget at $181K.

​Toth describes the renovations that had to be done.

“The Lion’s Den and Reading Nook have the same footprint as the former Media Center,” says Toth. “In the summer of 2017, work was done to clear the space, which included weeding the existing book collection and repurposing chairs, tables, and shelving.  Construction projects in the new space include a sheetrock wall which holds two 70-inch monitors, and a modular “DIRTT” wall to create separation between the Lions’ Den and Reading Nook.” ​

​ The new space can and will be used by both students and teachers. “According to Dr. Morillo,” says Toth, “the space is not just a learning environment, but a teaching environment. The furnishings are mobile with the goal of allowing for flexible, endless configurations. The new spaces bring endless possibilities to Mountain View.  Opportunities for collaboration, creativity, interdisciplinary projects, and innovation abound. The reaction of students, who received a tour of the new space prior to the end of the school year, confirmed the decision to move forward with the project.