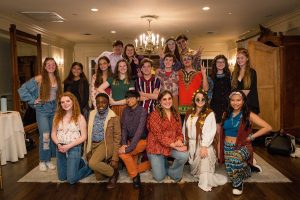 After over a 20-month layoff due to the COVID pandemic, MPAC’s teen Performing Arts Company (PAC) is back and performing at non-profit fundraisers and events throughout Morris County.

The PAC, under the direction of MPAC Education Director Cathy Roy and Musical Director Darius Frowner, is comprised of two dozen performers ages 14-21 from around the region who earned a spot in the group through an audition process in the fall. The members are not charged to be part of the group. (Roster of company members and hometowns listed at end)

“It’s so great to have our Performing Arts Company back in action and out performing in the community once again!” says Cathy Roy. “This is a really special group of talented and enthusiastic young performers.  We’re really proud to have them represent MPAC by performing for non-profit organizations all over the area.  It was a tough year and a half for everyone so having the opportunity to use their talent to spread joy and help others in person once again is extra meaningful to all of us.”

The company, which was formed to give students an opportunity to use their talent to give something back to the community, is made up of 24 talented students between the ages of 14-21.   At no cost to interested organizations, the group can come to an event or facility and perform as little as one Broadway musical number, or as much as a 60-minute revue.  Every performance is personalized and adapted to fit the needs of the organization.  The PAC travels with its own sound system and accompanist, and the students are personable and very professional.

In previous years, the PAC has been affiliated with many non-profit organizations and has provided entertainment for:  The Carol G. Simon Cancer Center, Morrisview Healthcare Center,  Habitat for Humanity, Family Services of Morris, Children on the Green, Good Grief, Care One, The American Cancer Society, The Cystic Fibrosis Foundation, The Center for the Prevention of Teen Suicide and many more!   In addition to their non-profit events, PAC members have also performed at The White House, Radio City Music Hall, Madison Square Garden and on Broadway with Kristen Chenoweth.  They have also been featured on the MPAC stage with many high profile artists, including:  Patti LuPone, Marvin Hamlisch, Vanessa Williams, Linda Eder, Foreigner, Brian Stokes-Mitchell, Sutton Foster and more!

Mayo Performing Arts Center, a 501(c)(3) nonprofit organization, presents a wide range of programs that entertain, enrich, and educate the diverse population of the region and enhance the economic vitality of Northern New Jersey. The 2021-2022 season is made possible, in part, by a grant the New Jersey State Council on the Arts/Department of State, a Partner Agency of the National Endowment for the Arts, as well as support received from the F.M. Kirby Foundation, The Blanche and Irving Laurie Foundation and numerous corporations, foundations and individuals. Mayo Performing Arts Center was named 2016 Outstanding Historic Theatre by the League of Historic American Theatres, and is ranked in the top 50 mid-sized performing arts centers by Pollstar Magazine.