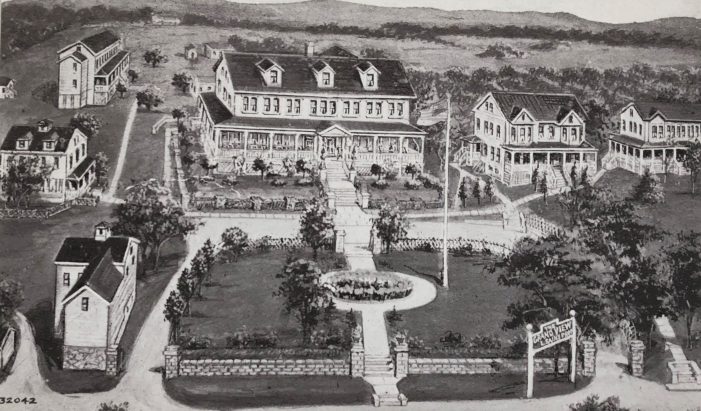 An artist’s depiction of the Sains Grand View Hotel shows six of the seven buildings that once stood on Brookside Road, around 1930. (Courtesy Randolph Township) 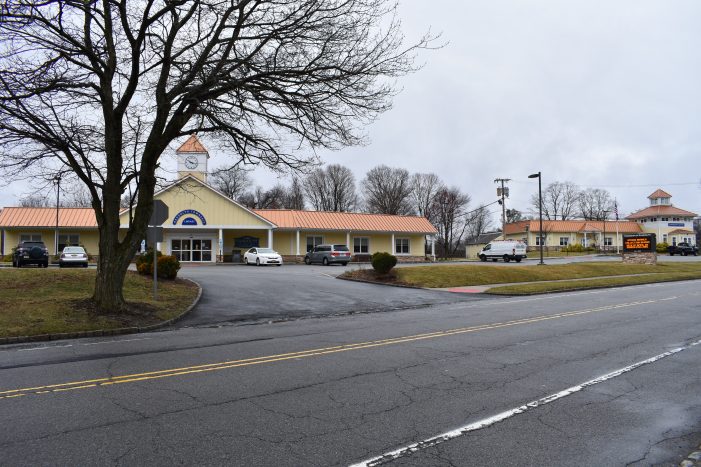 Ackerman’s Hotel was closed for alleged food code violations, in 1974. It is now the site of the township’s library. The township’s Community Center occupies what was previously the Casino, which housed a coffee shop, and cocktail lounge (Henry M. Holden)

In the early 20th century, Mt. Freedom, in Randolph Township, became a vacation destination for people from the urban areas, particularly from the lower east side of New York City.

In 1903, the first Jewish immigrants from Russia and other eastern European nations arrived. Max and Yetta Levine started a dairy farm. They were followed the same year by Sarah and Baruch Saltz.

Many families that farmed the land soon discovered they could not make a living in the rock and bolder strewn soil left behind by the receding Ice Age.

The air was clean, temperatures moderate, with plenty of trees and green grass. It was a stark contrast to the crowded, tenement conditions.

Geographically, Mt. Freedom is in the Shongum Mountains, part of the New Jersey Highlands. With an elevation of nearly 1,000 feet it seldom went beyond 90-degrees, with low humidity in the evenings, it was the perfect vacation spot.

Soon, some of the families began to rent rooms during the summer months. Before long, the enterprising family-built hotels were catered to a Jewish clientele.

Bernard Hirschhorn, a wealthy New York garment maker, visited in 1917. Two years later he bought 100 acres of land and built some of the first bungalow colonies.

Similar to the hotels in New York’s Catskill Mountains, Mt. Freedom also acquired the sobriquet “Borscht Belt” and eventually was home to at least 11 hotels, and 45 bungalow colonies, summer camps and swim clubs.

There was no need to advertise widely. Through word of mouth, the resort business flourished for decades.

It cost a family of four approximately $300 for a summer at the Saltz Hotel. This limited some people to weekend visits that cost about $5.00.

Around 1950, zoning changes began to prohibit buildings from expanding unless they were placed on separate lots of 100 feet.

At its peak, the summertime brought upwards of 10,000 visitors to Mt. Freedom. But slowly, the businesses began to fade.

In 1950, there were over 900 seasonal dwellings in Mt. Freedom. By 1960, it was down to 600. The 1970s saw an equally distressing drop to 400. The repeat customers were disappearing. Hotels which once featured Frank Sinatra, Henny Youngman, Phil Silvers,  and other “A-Listers” as evening entertainment were beginning to feel the changes.

After the war, it became more difficult to attract customers, who were driving to the Jersey Shore, once the Garden State Parkway opened in 1955. It marked the beginning of the end.

Sherman Acres, started by Israel Gargle, was a bungalow colony completely demolished in one summer when the land was cleared by a developer. The builder was allowed to construct houses on one part of the large parcel, and a portion was to become part of the Randolph Parks Trail System.

In 1960, the 96-acre Sains Hotel property was purchased by the Rocky Marciano Health Farm Corporation. The venture proved unsuccessful, and eventually a fire destroyed the building.

In 1968, the Newark Sunday News published a lengthy article on the zoning issues, which would eventually put the entire resort industry out of business.

In an October 10, 1974 Daily Record piece, the Saltz Hotel was still presenting itself as a “modern, air-conditioned, 200-room hotel featuring three dining rooms, seating 600, two cocktail lounges, a night club that seated 500, and a heated indoor pool and sauna.”

The zoning and building regulations made it difficult to build and maintain the hotels. Many eventually fell into disrepair or burned down.

Orthodox Jewish law required its followers to walk to Shabbat worship services. As a result, the bungalows were built within walking distance of the Mt. Freedom Jewish Center, built in 1923. It was enlarged over the years to accommodate the increase in worshipers.

By 1982, the hotels were gone, and the few remaining structures have since been repurposed. The immigrants are also gone, but some of their descendants have remained. The only reminders we have of this once thriving community are some of the street names, and the Hebrew Cemetery, built in 1937.