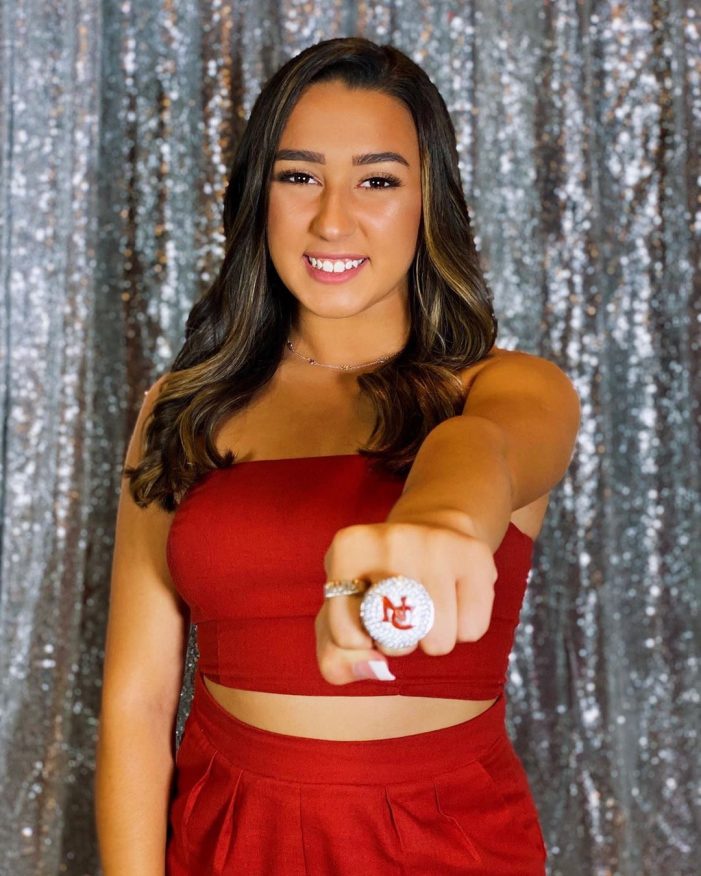 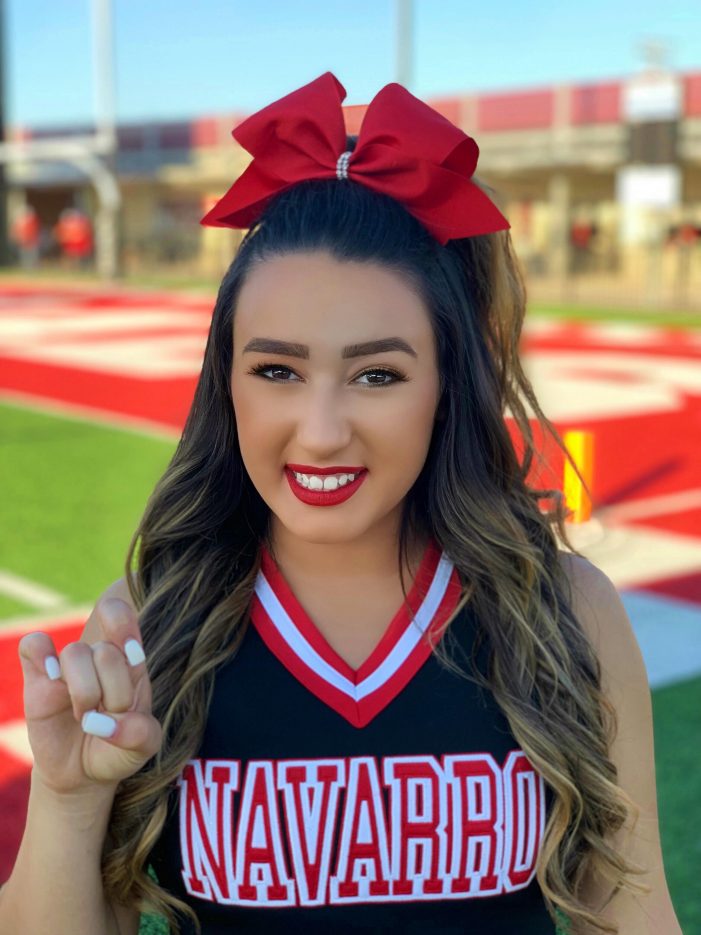 Netflix’s new docuseries, Cheer, has spread like wildfire. The show debuted in January 2020 and chronicles the world of cheerleading at Navarro College in Corsicana, TX. The tiny Texas college has big heart and big game when it comes to the world of competitive cheerleading. One of those Bulldog cheerleaders is Brooke Morosca, from Morris County. 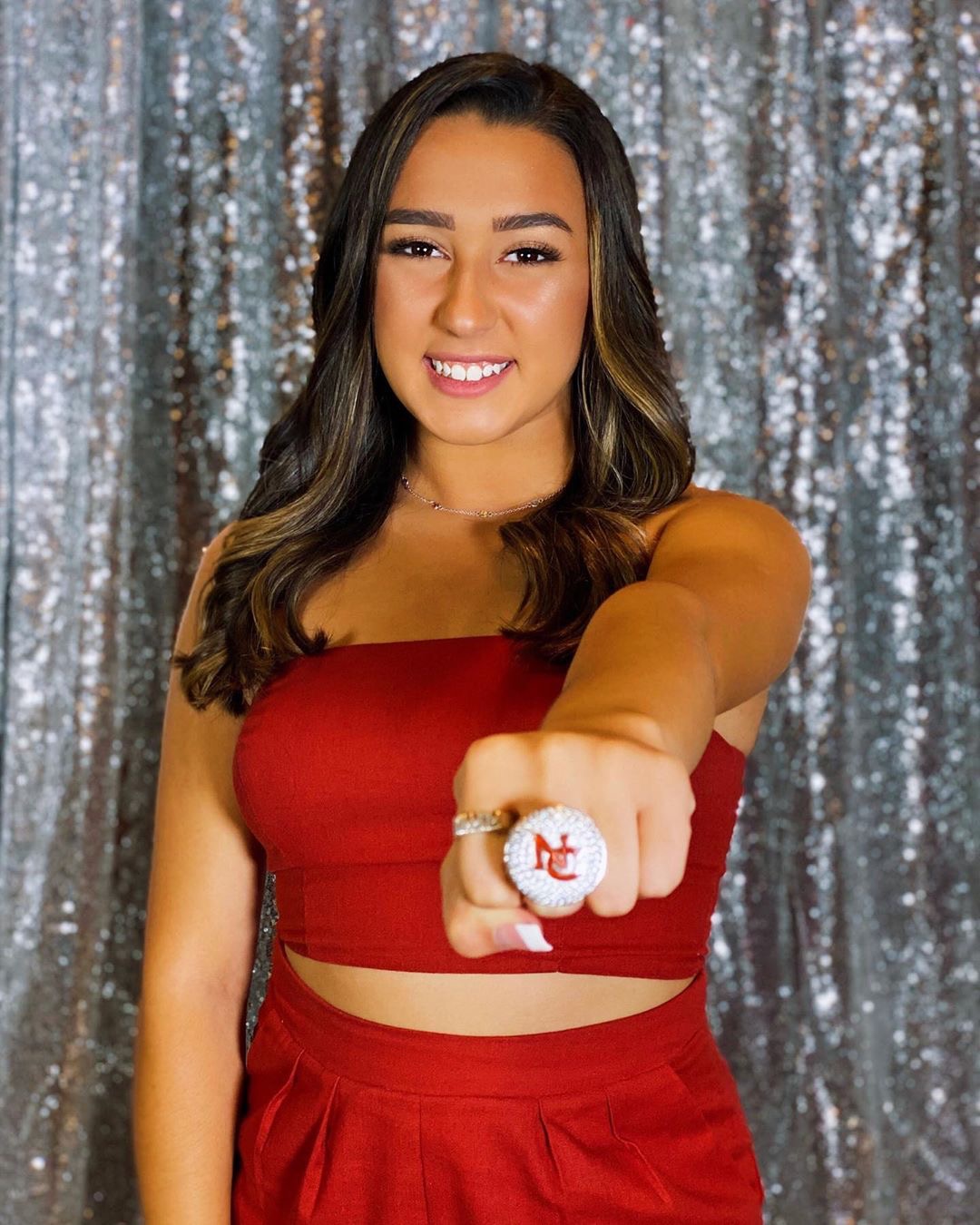 Morosca, who hails from Rockaway, is a 2018 graduate of Morris Knolls High School in Denville. The Rockaway native found her love for the sport of cheerleading when she was just four years old. She has cheered for two different all-star gyms for over 16 years. After looking at colleges and meeting with Navarro’s head coach, Monica Aldama, Morosca officially joined the freshman class.

“I was a really shy kid and my parents were hoping that cheer would help me branch out. I loved performing in front of people when I got on the mat. I grew up as a flyer and I’m continuing to co-ed stunt in college. When I first started to look at colleges, I wasn’t sure where I wanted to go, but once I got into contact with Monica and I saw the program, I knew this was where I wanted to be.” Morosca said.

Cheer follows the Navarro College cheerleaders as they prepare for their one and only competition of the year, NCA Nationals in Daytona, Fl. every April. The competition is the only one out there for collegiate cheerleaders and winning is everything to head coach Monica and her bulldog cheer team. The team spends an entire year preparing a 2 minute routine that gets performed and judged only once. The team has won the National Championship a total of 14 times and was named Grand National Champion five times.

“We got really close with the members of the film crew and they were really good about keeping their distance during practice for safety reasons. It ended up being an overall cool experience.” Morosca said.

Throughout the series, viewers get a behind the scenes look at the tumbling, the pyramid, injuries, and the real world of what it takes to be a competitive cheerleader. There are stories of anguish and triumph, overcoming the odds, and much more shown throughout. Since the series debuted, the stars of Navarro’s cheer team have been on talk shows and their social media follows have increased greatly. With the notoriety that they now have, one wonders, are they more nervous for Daytona this year?

“I would say we’re a little bit more nervous, just because our exposure has really tripled. We’ve always just known that we have a job to do at this competition, we just want to hit and win and that’s all we’re focusing on.” Morosca said.

The behind the scenes look gives viewers the inside access to the hours of practice, where skills are put to the test over and over again, no matter what. The emphasis that anything can happen is extremely present when injuries happen and even if an athlete isn’t on the mat officially, they can very quickly be called in to replace someone who is hurt or who isn’t giving their 100%. According to Morosca, practice is each afternoon from 12:40 p.m. to 3:30 p.m. and some nights, there is a two-hour practice on top of that. She also has a heavy course load of classes.

“Everyone has been really amazed at the hours and the amount of work that we put in. Nobody has known the behind the scenes of what I do. My family and friends have all been really supportive and they all think it’s really cool to see how hard we work.” Morosca said.

While the docuseries has blown up, the girls and guys who make up Navarro’s squad have been traveling, doing press interviews, even appearing on The Ellen DeGeneres Show. Through all of the attention, Morosca has remained humble and grateful.

“Cheerleading has taught me how not to give up and to always push myself to be the best, whether that is by being an athlete or being a student. I also remain humble and grateful and understand my blessings and being grateful for all life has to give. I have always believed in myself and believed in my dreams and cheerleading has brought me that.” Morosca said.

As Navarro is a two year college, Morosca is currently looking at her options of transferring to a four year school after her two years at Navarro are up. The pre-veterinary science major hopes to keep cheerleading in her life by continuing coaching the sport, even after she graduates with her veterinarian degree. For now, Morosca and her teammates are fully focused and locked in on preparing for NCA’s next month.

While there has been no official word from Netflix if Cheer will get a season two, many from around the world are begging them to bring more Cheer to television screens, going as far as starting an online petition. Visit www.netflix.com to watch the series now or www.navarrocollege.edu to learn more about the cheer team.