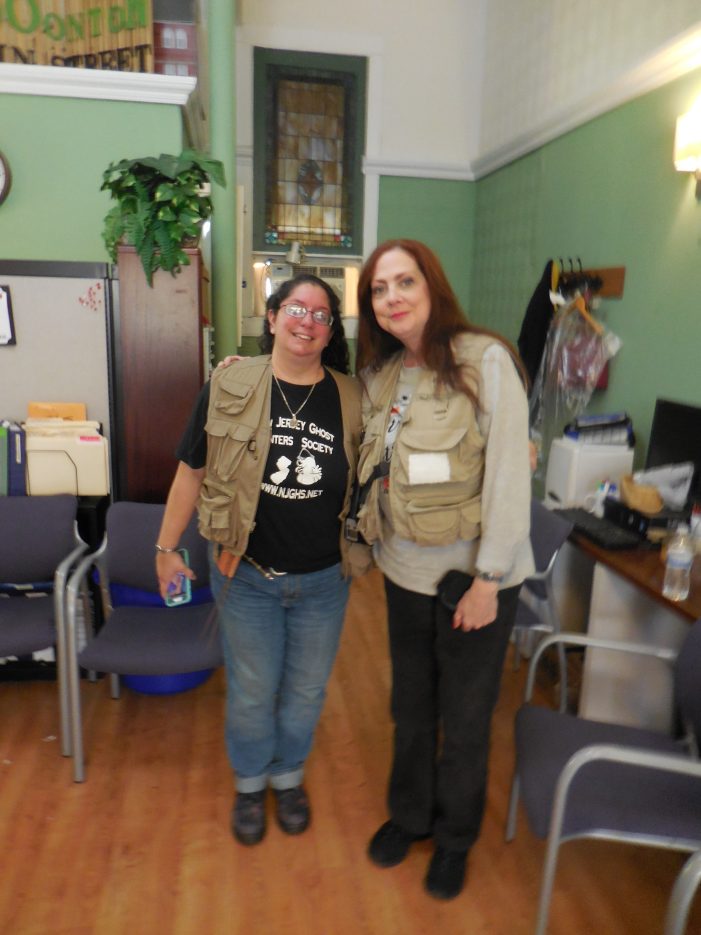 The New Jersey Ghost Hunter Society’s Dina Chirico and L’aura Hladik Hoffman in Boonton when they helped with the 2018 Ghost Walk. 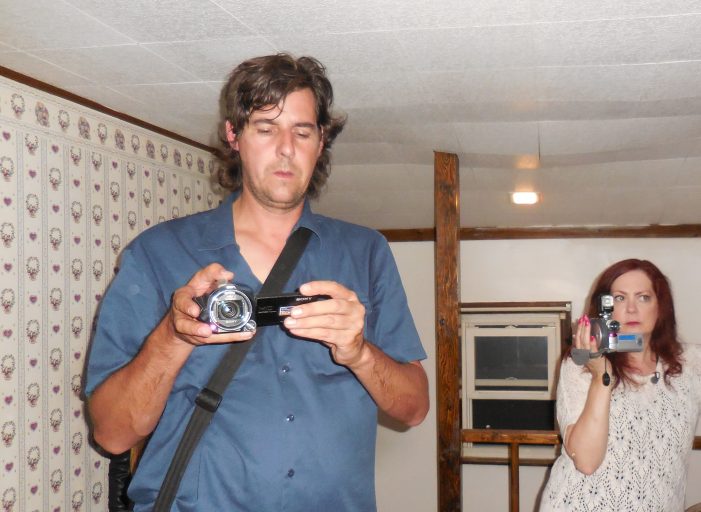 Photo1:  L’aura Hladik Hoffman, founder of the New Jersey Ghost Hunters Society and the cameraman from a German TV crew that went on an investigation with her and a team in Carlstd.

Paranormal activity generally spikes in October according to Maryann Taylor of Hackettstown.  Taylor, a paranormal investigator for four years, is administrator of the Facebook Group,

Midlife Spirits and a member of the New Jersey Ghost Hunters Society (NJGHS).  That society, a non-profit paranormal investigation organization which meets in Hackettstown, was founded in 1998 by L’Aura Hladik Hoffman.   Recently, Taylor, Hoffman and another NJGHS member,  Linda Wielkotz, of  Fair Lawn,  shared some of their paranormal experiences.

Taylor got involved in paranormal investigation about four years ago.  A group on Facebook called Lady GhostBusters was looking for people who had had paranormal experiences.  Taylor replied about living in a haunted house.  (Her family lives in her husband’s childhood home and has had experiences showing that his parent’s spirits are there.) From that connection, Taylor got involved in her first paranormal investigation.  In 2019, She went to Sterling Mines in Sussex County.  In the temperature-controlled environment, suddenly there was a mist that would come up to the camera.   When the mist was gone, it would return, if beckoned.   The members of the group would feel a chill.  The chill would move around the circle of members as though it was someone moving around them.

Taylor describes herself as “old school”.  While other investigators use a variety of technology, she uses a camera and audio playback.  She recalled an investigation of a boy scout camp.  During it, she and another investigator got separated from their group when they went back to get a camera that had been left behind.   After getting it, as they walked to rejoin the group, they heard growling behind them.  Thinking a bear was close behind, they ran and got to the building where the rest of the group was.   They told the others of being chased by a bear, but when the others looked outside, there was no bear.   Someone mentioned that they were in an area where you don’t really see any bears.   Later, they listened to the audio playback of the incident.  The growl had some distinguishable words in it: “Don’t let them get away.  I want that one.”  Taylor hopes she wasn’t the one they wanted.

Unlike Taylor, Wielkotz has been interested in the paranormal since her teens, Wielkotz noted that her mother would feed that interest by buying her books by parapsychologist Hans Holzer.  After her mother died in 1984, Wielkotz had experiences of her mom visiting her.   That prompted Wielkotz to find an organization focused on the paranormal:  she found NJGHS.

Wielkotz noted that one of her most memorable experiences was with the NJGHS during one of two investigations done at Rose Hill Cemetery in Matawan in July 2006.  Wielkotz could not make the first investigation but was very intrigued when an email about the second asked for “serious ghost hunters.”  When she arrived at the location, it was explained to those present that during the first investigation, stones were thrown at investigators by unseen forces. The cemetery had been checked to see if anyone was there before Wielkotz and the others came.  However, those assembled were told they could leave if they were too frightened.   Wielkotz stayed.  She shared her account of what happened that night;

“As the group walked up to the old crypt area where the attacks took place, we were there maybe two minutes when the same thing happened. Stones were being thrown from trees. Many people had experiences with Elementals (spirit ghosts) running around them feeling their energy.  When we left to go back to the gate, we stopped at the crypts and a piece of metal was thrown from a bush and a rock was thrown from the top of the crypt hitting an investigator in the side of the head. Again, unseen forces.  As we walked down the path, stones were still being thrown at investigators, hitting backpacks until we reached the main path.  The spirits in that area did not want us up there for some reason.”

As for Hoffman, according to the NJGHS website, she “has been officially ghost hunting since 1993 and founded the NJ Ghost Hunters Society in 1998, which to date is the largest paranormal investigating organization in New Jersey.” Recently, Hoffman recalled an incident around 2006/2007 when she led a team, which included their “tech guru”, Brian Sandt, in investigating the happenings at a private family house, down the shore in Spring Lake.   The residents of the home had experienced such terror that they could not sleep or live in the house and had moved into a local hotel.  That investigation got off to a rather funny start.

“While we were investigating, in the dark of course, suddenly, bright lights were flashed upon Brian and I and a male voice shouted, ‘Hands in the air!’ Brian was holding his thermal scanner and to the police it appeared as a firearm, given the low light and shadows. Brian exclaimed, ‘Don’t shoot! Please! It’s a thermal scanner! Not a gun!’” said Hoffman.   Hoffman noted that’s not usually the kind of response police expect to hear.  The police turned on the room lights and checked their IDs.  Hoffman and her team explained they were there checking out reported paranormal activity. Suspicious, the police contacted the homeowner who came to the home and verified who they were and their story.

After the homeowner and police left, Hoffman and her team started the investigation. They discovered a strong poltergeist energy in the house.   Hoffman explained what happened next:

“We experienced golf balls being thrown at us while coming down the stairs from the second floor. We tracked unusually high EMF within the center of the living room [though there were]  absolutely no electric outlets, ceiling lamps, or power source available to supply such readings! And the ‘wow factor’ of this investigation: we were gathered around the center island counter in the kitchen. I had my digital audio recorder in the middle of the counter recording our discussion. It was positioned parallel to me on the counter. Suddenly, it made a 1/4 turn and was now perpendicular to me on the counter. We all saw it move by an unseen hand! Concurrent to this movement, Brian’s EMF Meter chimed out a spike in the EMF reading. We could ‘feel’ the energy pass right through us and then we heard a loud knock come from the living room. We went to inspect and found another golf ball still slightly rolling on the floor at the foot of the stairs. Apparently, the ghost was having fun showing off its ability to move the audio recorder and hurled another golf ball.”

Besides being the founder and director of NJGHS, Hoffman is also an author and does presentations on the paranormal.  On October 17 at  6:00 PM, she’ll be presenting  “Ghosthunting NJ & NYC: Updated!!” at Emmaus Public Library, 11 East Main St., Emmaus, PA.  On October 27th at  7pm, she’ll be at the Old Bridge Public Library, Central Branch, One Old Bridge Plaza, Old Bridge, NJ, presenting “Ghosthunting NJ & NYC: Updated!!”.  On October 29th at noon, she will be presenting “Mysteries of the Paranormal” at the Plumstead Branch of Ocean County Library, 119 Evergreen Rd., New Egypt, NJ.

For more information on the NJGHS, visit its website www.njghs.net/njghshome.html.