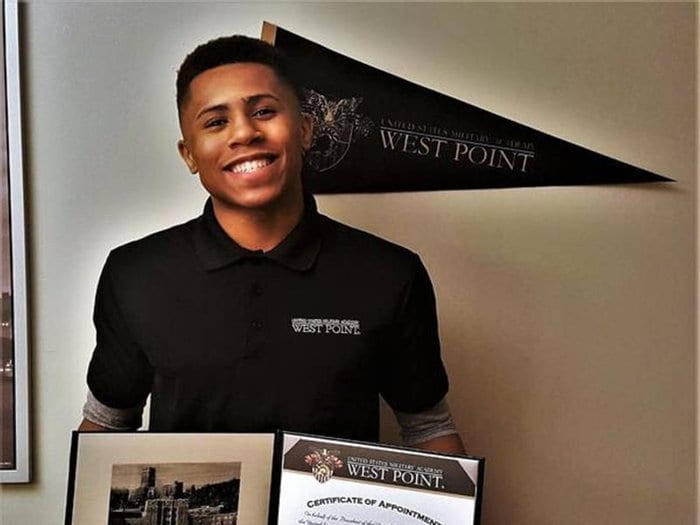 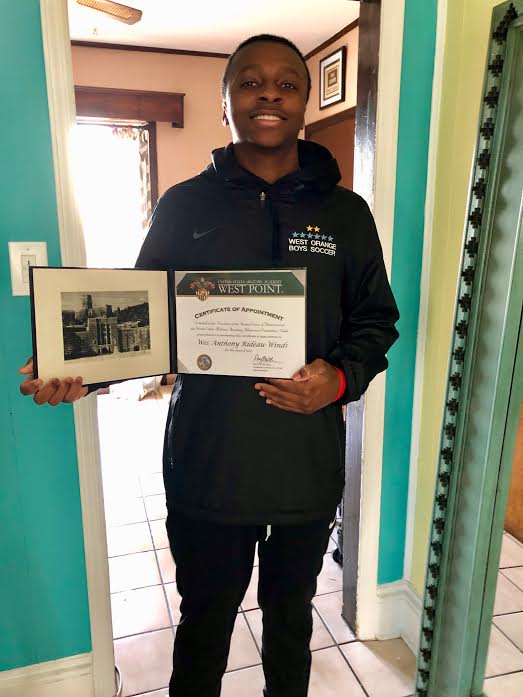 A pair of West Orange High School students know all about duty, honor and country and they will soon be putting those traits to good use on their way to the landmark US Military Academy at West Point.

The West Orange Public School District recently announced that Colin Morgan, Wes Rideau-Winds and Vanessa Lettman received their letters of appointment to West Point for the Class of 2023, out of only 60 New Jersey high school seniors offered admission to the renowned institution.

When Colin starts his journey on July 1, someone he knows well will be there to welcome him to the sprawling Hudson Valley campus.

The Mountaineer’s older brother CJ Morgan also attends the academy and is graduating next year. The brothers had plenty to talk about.

“I’m very proud and excited to have Colin at the academy with me,” CJ says. “He will definitely be a great addition to the long, grey line.”

According to Colin, his academy appointment was the culmination of what he had been striving for during the last couple of years.

“I knew since freshman year this is really where I wanted to go,” he says of West Point. “I’ve been trying to set myself up for that success with a lot of the stuff I did, a lot of clubs I participated in. I feel like it’s just the realization of all the hard work, the validation.”

Having both their boys at West Point seems like a dream, and Colin’s parents couldn’t be happier about his acceptance to such a prestigious institution.

“This is what I wanted so I’m not surprised — but they were ecstatic,” he says.

The brothers will join an illustrious roster of West Point alumni once they graduate, including Robert E. Lee (Class of 1829), Ulysses S. Grant (Class of 1843), Dwight D. Eisenhower (Class of 1915), Buzz Aldrin (Class of 1951), Norman Schwarzkopf (Class of 1956) and Marsh Carter (Class of 1962) — chair of the New York Stock Exchange who served two tours of duty in Vietnam and was awarded the Navy Cross, Bronze Star with valor and Purple Heart.

There are combat leaders and two US Presidents, countless governors, senators, representatives, ambassadors and 18 astronauts.

Before it became the famed military academy, George Washington considered West Point the most important post in America. He stationed his headquarters there in 1779 and worked to keep control of the fortified site on the West bank of the Hudson River throughout the Revolutionary War.

For students who have a duty to country and want to change the world through their leadership and vision — West Point is the place to go. The academy is consistently ranked among the top five colleges in the United States with good reason.

But keep in mind attending a military academy is not like regular college. Academy programs are incredibly demanding academically, physically, mentally and emotionally, and a cadet doesn’t get much of a respite from the frenetic pace or even time away from campus.

Not everyone thrives. It takes a certain kind of person to shine there and Colin is ready to take on the challenge.

“We are so proud of Colin and Wes here at West Orange High School,” says Principal Hayden Moore. “They represent the best of the best.”

Rideau-Winds will also get to showcase his exceptional talent and skills.

“It’s exciting, he says.  “I’ve been waiting for a while so it’s good to hear the news that I was accepted. I finally have assurance.”

But it didn’t happen overnight.

“They asked me to get my grades up and go for my Congressional interview (he secured a Service Academy Nomination from Rep. Donald Payne). I had to do a bunch of stuff to even get interviewed in the first place,” Rideau-Winds says. “The application is really long and tedious.”

Regardless, the 19-year-old says West Point was his drawing card, he didn’t even apply to any other schools.

A star soccer player at WOHS, he will continue his athletic career in college and put in his active duty service obligation upon graduating.

“Depending on how those five years go; I might stay, I might leave,” Rideau-Winds says. “I’ve always wanted to do engineering, but maybe get into the business type of thing after serving in the Army.”

According to Colin, the high school’s ROTC program is great preparation.

“This is probably the place we get the most exposure,” he says.  “Outside of that, my brother had a big impact on both me and Vanessa, she’s our family friend. It also helped that we all kind of fed off each other’s goals.”

Lettman is currently weighing her options.

Starting the next chapter with Colin will bring Rideau-Winds a sense of home.

“I think it’s just nice to know that I have other people that are going in with me, just not going in by myself,” he says. “Always have a familiar face to go back to — even if my goal is to make new friends and meet new people there.”

As the end of his high school days draw near, the senior captain/defender is most looking forward to playing collegiate soccer as part of Army West Point Athletics.

According to school officials, the Morgan family hails from Chicago and years later relocated to New Jersey, where the boys attended Edison and Liberty Middle Schools and WOHS. The brothers were both academic standouts and star wrestlers.

With everything he put into it, Colin knew there was a good possibility he could land his top college — and follow in his brother’s footsteps.

“I know it’s extremely competitive so I had other options just in case but there were no options that I would take over it,” he says.

As for the wrestler’s longterm plans, he has his sights set on the medical field.

“If I am in the top or so percent that they want to send out, I’ll be able to immediately after the four years go into medical school that is also provided by the academy,” he says. “Then serving time for the Army as a doctor, probably an ER doc — anything more specific like an actual field I’m very interested in radiology.”

Now Colin and Wes have the chance to soak up the West Point experience and what could be better than that.