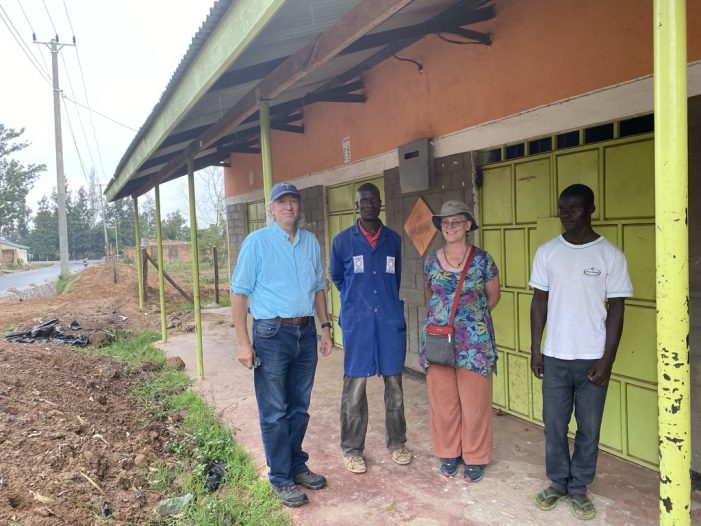 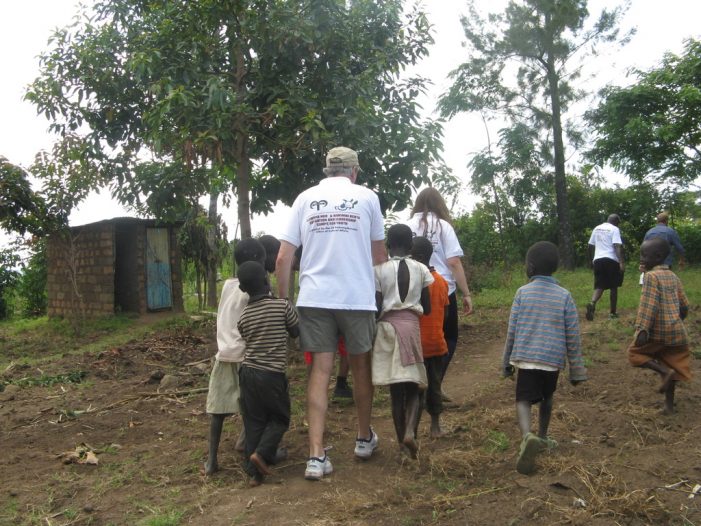 Kiwimbi International Trustee, John Rathgeber being accompanied by kids walking through a village 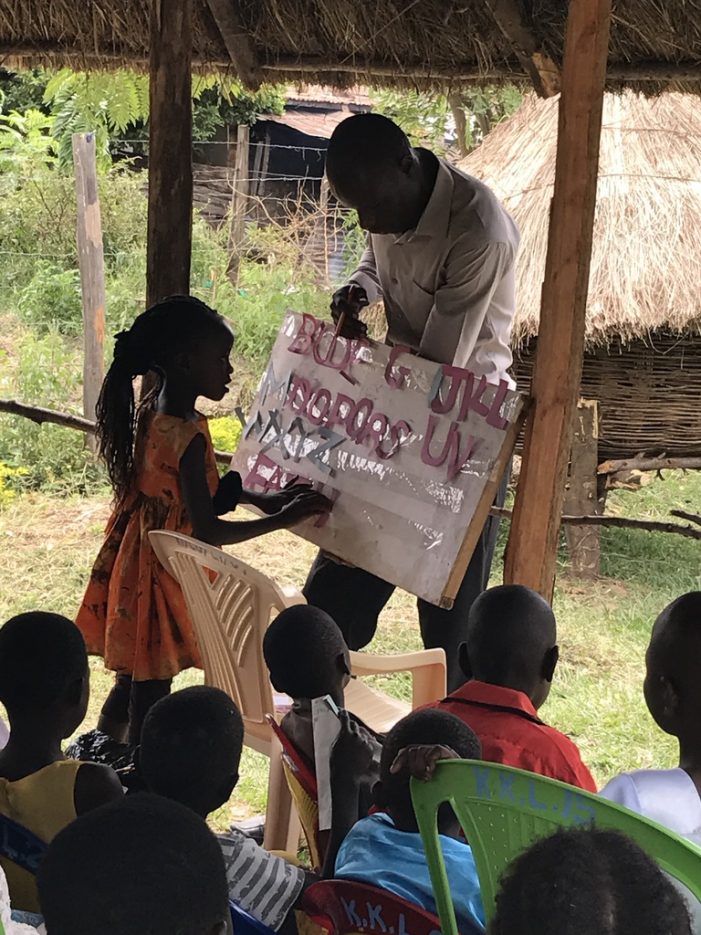 The power of education drives Kiwimbi’s potent partnership with underserved communities, vital for the future of children in rural Kenya.

“It’s an opportunity to support incredibly underserved people and make a difference in the lives of (those) who live with so few opportunities,” says Lisa Connell, director of development and communications.

Kiwimbi’s mission is to  partner with underserved communities to create educational opportunities through locally run libraries and community learning centers.

According to Connell, the educational system in Kenya was such that grade eight students had to pass the KCPE (Kenyan Certificate of Primary Education) with at least 250 out of 500 points on this national exam (given in English, not their native tongue) — otherwise they didn’t go to high school, it was the end of the road educationally.

Then recently the government made secondary school a requirement, and everybody had the opportunity to attend high school. But the test now determines the quality of the secondary school where they can enroll.

The secondary school system In Kenya is divided into levels: National, Extra-county, Sun-county and County.

“Quality goes down, with each,” Connell says. “So a Sub-county school might have nothing more than an under-prepared teacher, 100 students and a blackboard. There are National schools, equivalent to good high schools in the US,” she says.

Connell says one of Kiwimbi’s Kenyan supporters shared that some high school’s don’t even have a science lab, so

when they take the mandatory test at the end of secondary school and it was time to use a microscope in the exam, there were schools where kids had never seen one because their schools didn’t have science labs.  To be offered a university spot they must pass another exam at the culmination of high school.

Most of the secondary schools are boarding schools, crucial for girls especially, so they have the opportunity to focus on their education and not be required to devote time for chores and housekeeping.

Kiwimbi runs many programs to support education in rural Kenyan, including an intensive program at 3 schools where small group tutoring, one-on-one mentoring and a daily lunch are the main components.

So in preparation for their first national exam, Kiwimbi provides nutritious lunch for Grade   Eight students.

“Feeding not only gives them brain power and nutrition, the ability to concentrate throughout their day — it keeps them there so they can focus on their education,” says the director of development and communications.

The students in these 3 schools passed the 2020 KCPE at a rate of 63 percent, “Instead of the three percent average, usually achieved by similarily situated rural children, leaving a lot of 14-year-olds with no options,” she says.  They are excited to see what March’s test will unveil.

Kiwimbi also provides access to books, newspapers and other resources in their library, in satellite libraries they established and through regular delivery of books to the three schools they work with in the intensive program, as well as 72 schools in nearby villages.

“Some of them come to us, either the class or the kids. Sometimes a teacher might get the books and bring them back,” the director of development and communications says the service is efficient.

The Kiwimbi Community Centre was a rundown building owned by the county, now borrowed by Kiwimbi. They cleaned and painted the space, which houses the county’s (more than a million people) lone free public library.

According to Connell, people come to charge their phones, read the newspapers, visit the museum, where they work on cultural preservation, and tailor and carpentry vocational programs.

“We do outreach to three schools; an intense program includes daily lunch for the eighth-grade students, small group tutoring and one-on-one mentoring,” she says.

Video of a 45-minute walk two kids took from their home hut to the Kiwimbi Library introduced Connell to the incredible experience.

Her time at Kiwimbi since February 2020 has been transformative.

“I find it fulfilling and challenging in all the right ways to work towards supporting the efforts of the students,” the director of development and communications says they’re hard workers.

She was attracted to this cause because of her commitment to education, years as a third-grade (and preschool) teacher.

“I was a Big Sister in college, taught Sunday school with my kids and was a Brownie leader,” says Connell. “I started at Kiwimbi in more of an administrative capacity; the position grew over the last two years. I like the people I work with, our organization, Kenyan culture is fascinating and enriching to me.”

In 2010 Lynne Rathgeber, Board Chair of Kiwimbi International reached out to Prof. Olubayi Olubayi as a friend to help become more involved with non-profit work for the most underserved.

Over the course of their chat, Olubayi told her of his move back to Kenya after years as an American student and teacher.

“Early education he was at risk of not proceeding to secondary school because of having trouble with math, and Kenya’s exam system weeded out children like him,” Rathgeber says. “He was fortunate and got help, earning a Ph.D. in microbiology.”

The professor explained back then children in rural Kenya faced the same do-or-die exams.

“Rural children, even the brightest, could not move ahead academically because their schools were too poor to teach them,” the Board Chair says Olubayi wanted to share educational opportunities with a new generation of children, and she wanted to help.

So Rathgeber and the professor gathered a group of like-minded friends to develop the concept that became Kiwimbi — a Community Learning Center serves as a source of academic and vocational training, free to all and separate from, but complementary to, the public school system.

“That person will be able to earn a better living, support their family and benefit the wider community, spreading like a ripple through water,” she says, of the effect.

It was a massive pursuit.

Rathgeber had never been to Kenya, so in 2012 she, husband John and daughter Natalie took their first trip to witness it firsthand, engage with the people to understand if the Kiwimbi concept made sense and would be welcome, and learn about the communities benefiting from their educational opportunity.

She calls it a diverse and beautiful country.

“We didn’t see it all, but did see the big city (Nairobi), a bit of the largest slum in Africa (Kibera), high mountains (Mt. Kenya), vast plains (Masai Mara), spectacular game (lions, hippos, giraffes, elephants, hyenas, antelope, zebra, wildebeest… so many); industrious people walking everywhere, and smiling children thrilled to see their first white people,” the Board Chair says they fell in love.

Seeing people make do on tiny farmsteads with mud huts, water from the river, no electricity, reliant on a changing climate Rathgeber calls an eye-opener.

The children spread the word about the visiting “wazungu” (white people), wanted to hold their hands and tried to converse (on a limited basis), as well as see photos on their phones and ask questions.

“When we sat with them with Olubayi and other adults and asked about their aspirations, they were hopeful (which) we encouraged,” she says. “The sad truth is without access to better education, for the vast majority those might be pipe dreams, and limited in vision by the world around them. If you have never seen or known of a scientist, mathematician, engineer, writer, a painter… how can you aspire to become one?”

After visiting this distant world Rathgeber says they knew they were doing the right thing in establishing Kiwimbi there.

COVID hits marginalized and underserved students hardest. Kiwimbi continued its impactful work throughout the pandemic, while Kenya closed down.

Travel was restricted, schools closed the better part of a year, masks were mandated, the country was cautious. Kenya was fortunate to not have the number of first-year infections of other nations.

“But with schools closed, children could not access what few resources they might have had, education came to a standstill for the majority of Kenyan children, especially in rural areas where books were scarce and other services non-existent,” says the Board Chair, adding Kiwimbi worked within the restrictions and met with most of the children who depended on them.

They met in small groups outside and a limited number had access to enter and borrow library books, which they took to various small-group meetings around the countryside.

The months’ long break did not result in a setback; it provided many a chance to catch up with students from more affluent areas.

The path to liberation is knowledge and Rathgeber says Kiwimbi takes this route. Rather than give “things” to their beneficiaries, they share knowledge.

“This is empowerment, not handouts,” she adds if a young person is educated, they have the power to earn a livelihood, ensure their siblings education, get a job off the tiny farm or create a successful business.

“They can make educated decisions about who to elect to power and envision a village, county or country serving the best interests of their families, determine how to accomplish that, and make it happen.”

With knowledge they can mold their own world.

Thousands of children with access to books and other resources they didn’t have before — in Busia County (western Kenya) impacted, Kiwimbi sees the program as one to develop.

“Having implemented the idea successfully there, we plan to replicate the model so we can expand our geographic impact to other underserved areas,” Rathgeber says.

To learn more, visit www.kiwimbi.org or text KIWIMBI to 41444 and donate. Volunteering is also welcome.