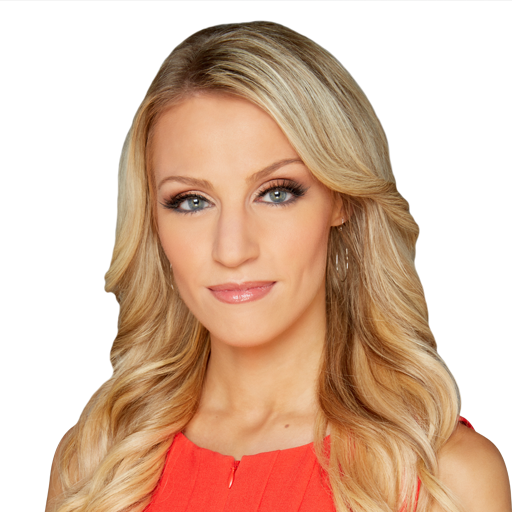 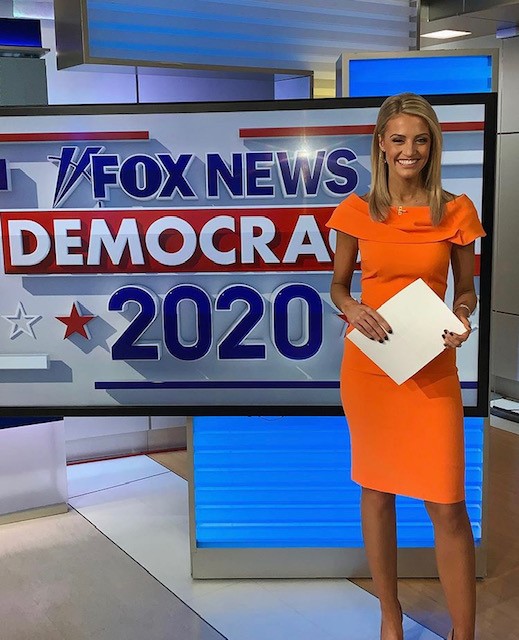 And she welcomed after high school a very brief entry into the field, she appearing on billboards in Times Square and near Giants Stadium as the Party City “Gothic Angel.”

“It was a lot of fun,” she laughs. “I think it’s pretty funny, and I will be forever grateful to Party City for hiring me.”

Speaking of being grateful, modeling’s loss is thankfully a gain for television news. Shimkus has been with Fox News since her senior year in college and wouldn’t have it any other way. “I wouldn’t want to work anywhere else but Fox News. Let’s leave it at that. If they’ll have me, they’ll be stuck with me,” she affirms.

The popular news channel may not be aware, but they’ve been stuck with her since her childhood. She explains. “Early on, when I was getting ready for school, my parents would always have Fox & Friends on in the background, and  when I was eating breakfast, I was watching Fox & Friends.” She “saw” herself one day on that very screen, the person others would be watching deliver the news. “That’s why I wanted to do what I’m doing today.”

Shimkus hails from Long Valley, New Jersey, land of farms and serenity, a contrast to her current Gotham life in New York City, but a perfect mirror for her sunny personality. “It was a perfect childhood,” says Shimkus, who turned 34 on November 7. “At the time – and I think this is pretty common for kids, they don’t necessarily appreciate their surroundings because it’s just so normal to them – growing up in a rural area was just something that was totally normal to me. My parents’ house is on about 100 acres of historic land, and it’s protected land. It’s just one of those things when I grew up and I moved to the city, and then I went back to my parents’ house, I was so appreciative of the area I grew up in because it’s just gorgeous. You know, there’s sort of a negative perception to New Jersey – the (New Jersey) Turnpike and the more crowded areas – but it’s called the Garden State for a reason, and that reason is Long Valley. It’s gorgeous, and I have such a special place in my heart for Morris County.”

Carley’s father, Edward, is a chemist, and her mother, Zulma, a former flight attendant. “I’ve had so much help in my life, and the first two people who come to mind are my parents. They’re your heroes when you’re little, they’re the only people you know, and aside from God and him being such a big part of my life, they’re my shoulders to cry on. I would also give a big ole shout out to my grandma, who is 95 years old. She is amazing and one of the most funny, loving people I’ve ever met.”

Carley has one sister, Margot, an artist. “I think she’s beautiful. We have a great relationship. She’s the older sister. And she’s going to hate me for pointing this out, but I’m about 6 inches taller than her,” she says, laughing again. She then adds, “Obviously, growing up you look up to your older sibling, and I absolutely did. She is such a talented artist, and talented in so many ways…the smarter of the two sisters. She’s just such a great person.”

And then there’s her husband of 5 years, Peter Buchignani. “I look forward to Friday’s like it’s Christmas every single week, and Sundays are the tough days when you’ve got to fly back,” says Shimkus, describing her long-distance marriage to Buchignani, whom she met on her 23rd birthday. He works in Chicago, she in New York City. “He moved to Chicago in 2013, so we have been long distance for 7 years, and we’ve been together for 10, and we’ve been married for 5. Our whole marriage has been between New York and Chicago. We’re both very career minded people right now, and because my career is here and his is there, we make it work. We try to see each other every weekend, and because of this pandemic we didn’t see each other for three months (between March and Memorial Day). You have to make sacrifices like that, but that was sort of the national mood: everybody doing their part and staying at home. Honestly, I give him all the credit. He is such an agreeable person; he goes the extra mile to make sure we get to see each other every weekend. I would say it’s about a 70/30 split, with him doing a majority of the travel to here. One day it won’t be like that anymore. It’s always exciting to see each other.”

Shimkus attended West Morris Central High School on the Chester and Long Valley township lines. “Academically it’s a great school,” she says, and the sporting events aren’t bad, either. “There’s nothing like a West Morris and Mendham football game. I still remember those nights and looking forward to them. There’s so much football pride at West Morris, and Lacrosse pride, and sports pride in general, so it was so much fun. Being there was a lot of fun, and going to West Morris really prepared you for college, and it eventually prepared you for the real world.”

Shimkus, who was also a Student Council member, relives briefly also participating in a fun “Bagel Rebellion.” “Okay, yes, the ‘Bagel Rebellion.’ We had free bagels for Senior Day, and it got cut short, and everybody just walked out of school, and went to the football field. My mom was volunteering that day, so I personally was like, ‘Oh my gosh, do I go with my mom? Do I go with my friends?’ And it was this big moral dilemma for me. Being 17 years old, I went with my friends. It was squared away, and I think looking back the teachers knew that we were all graduating, and it was sort of like a fun last hurrah.”

Shimkus, who loved the subject of English in high school, and also had a great interest in politics, attended Quinnipiac University, graduating in 2009 with a B.A. in broadcast journalism, and interning during her senior year for Fox News in Washington D.C. “They really put me to work in such a positive way and taught me a lot about TV,” she recalls. She was taken on a tour of Capitol Hill and Congress, and the station also allowed her to pitch ideas which found their way to live air. It was a morale booster. “You’re learning and you’re young – and I’m still learning – and so for Fox to take an interest so seriously is a really great thing for young minds in this industry.”

After college, she was a news producer at Fox News, and in 2012, was named associate producer with the Fox Business Network, working for Don Imus and the “Imus in the Morning” show. “Imus gave me so much,” she says fondly of the popular radio Hall of Famer. “He gave me my first shot. I remember when I first got hired as his assistant. He ended up becoming sort of like a grandfatherly figure in my life. He gave me a chance; he put me on the air. That doesn’t really happen in New York very often; you have to go to a smaller market first.”

“All in all, he was somebody who I owe so much to.”

Shimkus now has been at Fox for her entire career. She states, “I feel so blessed to have the career that Fox News has afforded me.”

Shimkus, like most, agrees: 2020 has been a unique year. “It really does feel like we’re living through history right now. When you think about the layers of things that have happened on top of each other, with the global coronavirus pandemic, leading into social justice protests, leading into the recent hurricane that we experienced. When you think about it, President (Donald) Trump was impeached last year into this year, and that feels like 100 years ago. So, it’s an unbelievable time to be alive, and it’s am unbelievable time to be looking at it from a news perspective where things are changing every single day. And at the same time things are changing, things have kind of slowed down. Things have been canceled, and people are more grounded and staying at home and doing things virtually. I think that a lot of the things we’re seeing unfold right now are going to affect the course of history.”

Carley Shimkus relies on her faith daily. “If you see me as sort of a sure-footed person,” she says, “it’s not because of me. It’s because of God and my faith.” A prayer journal individual, she doesn’t know where she’d be in life if she couldn’t pray about her concerns or fall back on her faith. “The church I went to was Our Lady of the Mountain, and that was a huge part of my upbringing. There was a Peer Ministry program that I spent a lot of time being a part of, and we did a lot of cool things both in and out of the community.” She employs her faith during her on-air work at Fox News. “Whenever I do a segment, and I’ve worked very hard on it, I always pray, ‘I hope that this goes the best possible way.’ Without that, I don’t know where I would be.”