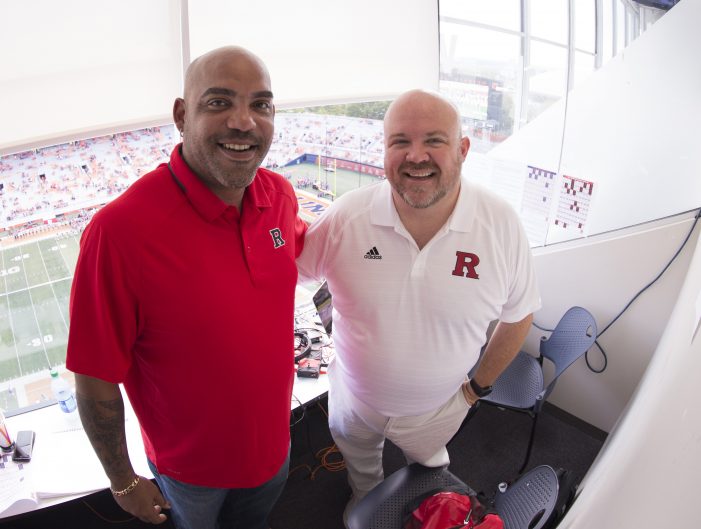 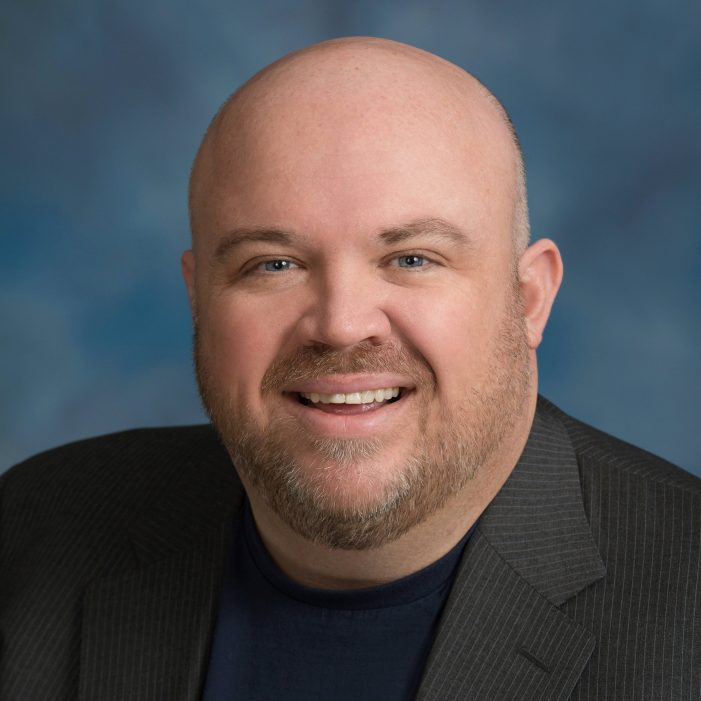 “My wife (Sheryl Spain, who works part-time for the university’s athletic department) knew about it. We just happened to drive by, and she pulls over for a second. We pulled into a parking lot and I was like, ‘What’s going on?’ And she’s like, ‘I’ve just got to check my phone.’ And then she pointed, and I saw the billboard. It was pretty cool.”

The billboard to which Carlin refers was on Route 1, and on it Rutgers University congratulated Carlin for being named for the second time as “Sportscaster of the Year” by the National Sports Media Association. “Rutgers has been amazing,” says Carlin of the school for whom he has worked since late 2000. “I was completely blown away by it (the billboard).”

Carlin, who also currently hosts “Carlin” weeknights from 7 – 10 p.m. on ESPN Radio locally, and does weekend shows for the national network as well, says the award – which he first won in 2016 – is for the Garden State. “I’m a New Jersey guy through and through, and it means the world that I can kind of represent our state. I can’t really put into words what it means to win. It’s a fantastic honor, and I just love the fact that it’s representing New Jersey. Because I’m always one of those guys that – you know, our state gets smacked around a lot. It bugs me to no end, so that makes it particularly proud.”

“And really, more than anything,” he adds, “to represent Rutgers is an incredible honor for me.”

Carlin started as a sideline reporter for Rutgers, and officially moved up into the broadcast booth in 2004. It was a key period: Rutgers football was on the rise. “Greg (Schiano) hired me when he got there, along with Tom McCarthy and Tim Pernetti to do the radio gigs,” recalls Carlin. “You know those first few years it had been rough. But you saw in this guy (Schiano) just an unwavering belief in the ability to get this done.” In 2004, when the Rutgers football world was a little disappointed that they didn’t get to a bowl game, Schiano took the podium at the awards dinner and guaranteed a trip (to a bowl game appearance) for 2005.

The Scarlet Knights lost that guaranteed Insight Bowl to Arizona State, 45 – 40, but the best was just a year away.

Carlin, 48, was born in Morristown, but most of his childhood was spent in Chatham Township. He was the youngest of six children, and his father and mother hailed from New York City, he a doctor and she a nurse. When the couple was first married, they moved up to Massachusetts where Carlin’s father had a practice, but eventually moved down to New Jersey in 1972. “They had five kids in six years,” says Carlin, “and then they had me eight years later. So, I was not exactly in the plans. But growing up in Chatham Township was fantastic. We were very fortunate to live there. They (his parents) picked a great place. I absolutely loved it,  really.”

Hobart College in Geneva, New York, Carlin’s secondary school, wasn’t really a breeding ground for sports announcers, but neither was Carlin one of those kids that used to watch the television and turn the volume down and announce the games. “It’s funny,” he says. “I was a huge, huge sports fan growing up; I was a  huge Mets fan. But I never really thought of it as a career. I never honestly did, and I went to Hobart thinking I was going to be a lawyer. I had two older brothers who were lawyers, and I took a poli sci class and I said, ‘Nope. This is not going to work.’” A friend who worked at the radio station asked him if he’d be interested, and he ended up doing sideline reporting for football games, eventually becoming sports director, and hosted a talk show, too. “I just absolutely fell in love with it then. And the great thing about Hobart for me was at that time, sports broadcasting wasn’t anything that really interested anyone there. Nobody went there for it. So, as a freshman, I got to go and be on the air, learn how to do it by doing it.” Was there nervousness at that time? Absolutely. “I didn’t know what the heck I was doing. I didn’t know how to prepare for games. But I got over the nerves  relatively quickly because, again, you thought, ‘Well, nobody’s really listening to these games anyway.’ The only thing they cared about at Hobart was lacrosse.”

Carlin covered lacrosse and a host of other sports, including minor league baseball. “There was a team in town named the Geneva Cubs with the (Chicago) Cubs organization,” he recalls. “Geneva was the first place that Pete Rose played professionally in 1963. I got a chance to intern for the team. So, we broadcast 15 or  20 games or something like that, and for the broadcasting I didn’t get paid for the game, and for the nights when we weren’t broadcasting, I got like 17 bucks a game which seemed like it was a fortune – and that was to run the hotdog stand and then the speed pitch and do all that stuff. I enjoyed it so much that the next summer, the team had moved to Williamsport, Pennsylvania, and I did it two more summers.”

His next stop behind the mic was with Bucknell University football, where he met his mentor, Bob Behler, now the voice of Boise State athletics. “Bob and I met in 1994. He was the primary broadcaster that they hired for the Williamsport team when they moved there, and I did the road games with him. I can’t say enough how much I learned from him. And we got along so well that he asked me to do color (commentary) on Bucknell football, and Bucknell’s about 30 miles away from Williamsport.” He commuted every weekend of his senior year to wherever the team was playing to provide color commentary. Behler educated Carlin, especially about game preparation. “I learned so much about everything from him.”

After graduating from Hobart, Carlin sent out exactly 100 letters and resumes for a job and didn’t get one interview. However, he did get a call from the major sports radio network, WFAN, to whom he had written for an internship. “Obviously, I listened to it a ton,” he says. There was a problem, though. He was a college grad, and he needed to be a student again to do the internship for credit. “I called probably 30 or 40 schools in the tri state area and said,  ‘Let me give you 500 bucks so I can get one credit.’ I finally found a place, I got an internship there (at WFAN), and from there started working part-time and then for a long full-time,  as a producer as an assistant producer, and was producing “Mike and the Mad Dog” for seven and a half years.” He then did sports for Don Imus, another big stage. “Later when I got on the air, I did overnights for a short time, and then got that gig which was incredible for exposure.” Next was New York Giants preseason football games on the radio side while Bob Papa was doing television. “And that was right around when I started doing play by play for Rutgers. I started doing sideline for Rutgers when Greg Schiano got there in late 2000 for three years.”

The Rutgers Scarlet Knights 2006 football season: for Carlin and anyone involved with or supported with the football program, it was magical. Everything came together during the 11 -2 campaign, and Carlin had a front row seat, especially for November 9, when the #3 ranked, 9 – 0 Louisville Cardinals came calling on #15 ranked, 9 – 0 Rutgers.

“You know,” says Carlin, “I get asked about times where I think like, ‘You know, do we put too much emphasis on that game?’ And the truth is we don’t, because you needed something that was going to be that symbolic moment.”

Carlin says he always felt like leading up to that game that, win or lose, the best moment of it was going to be right before kickoff. Rutgers Stadium – that same venue where, just three years earlier, Carlin claims “you could literally pick up tickets that were on the ground and walk in, and there was nobody there,” – was going insane, and that Thursday evening was the center of the college football universe. “And right before kickoff, it was just so great to see,” he remembers. “I teared up a little bit, just seeing how nuts it was for the fans at that point.” And when Rutgers wrapped up the 28 – 25 win that night, Carlin says, “I was just trying to not screw up this incredible moment, to tell you the truth. I think every broadcaster that tells you that they don’t think about what they’re going to say is lying, but I had been thinking about it a couple of days leading up to it. ‘What’s it going to be like? It’s going to be ‘pandemonium!’ Okay, let me file that one away.” He used that exact word as the fans stormed the field. “It was just that. Seeing that  that field covered was something I will never forget.”

Carlin and his wife, who celebrated their 14th wedding anniversary in January, and are right at home at Rutgers. For Carlin, it may be a long way from Hobart College, but close to his Garden State boyhood, and he wouldn’t have it any other way. “I love what I do and I’m fortunate to get to do it for the state university. It means everything to me to be in that position.”

His ultimate dream is to be at the microphone when the Scarlet Knights bring home a national gridiron title to New Brunswick. “I do want to be on the other end of this, I do want to see the story come out on the other side. I truly can’t wait to see it.”

No doubt it will be pandemonium, Chris Carlin, and we’re thankful you’ll be saying that word again.