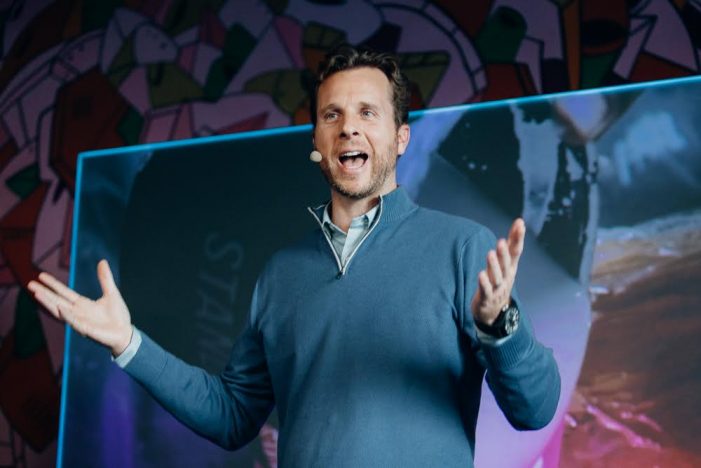 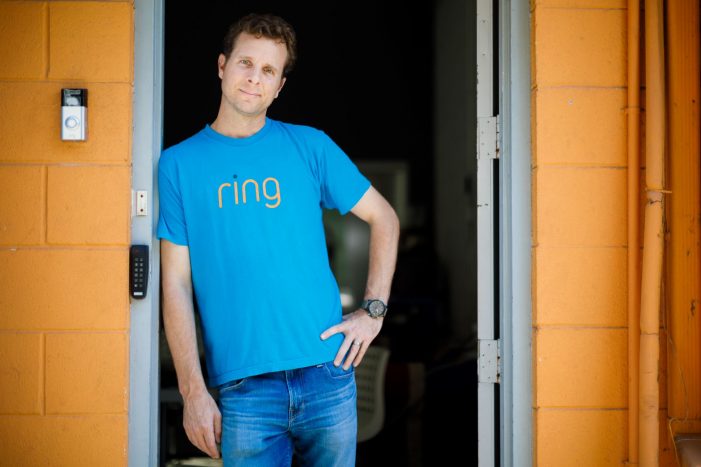 Don’t tell 44-year-old Jamie Siminoff, Founder and Chief Inventor at Ring, that he can’t do something. 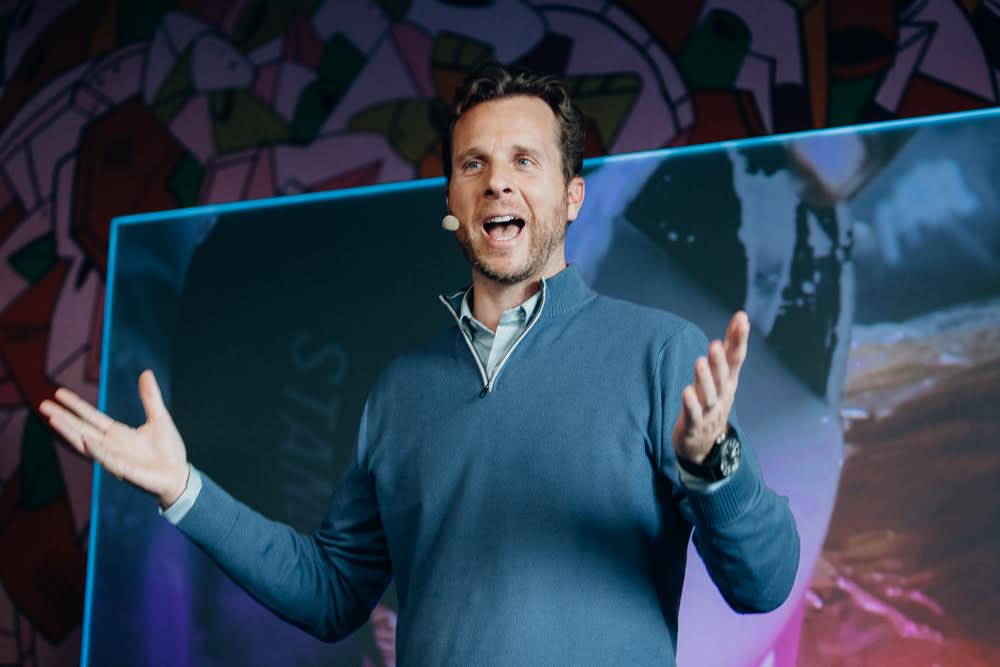 He vividly recalls attending Morristown Beard High School and Rich Timek’s architecture class. “When I was young, I had a passion for creativity, and all I wanted to do was build things with my hands,” he says. “Rich’s class gave me a crash course in what would become a critical lesson, which is the importance of having a vision, and working relentlessly to achieve that.” The class was instructed to build a house from start to finish; design the architecture and then construct a model. “I remember I wanted my model to have cedar shingles, and Rich told me he didn’t think I could do it because it would take too long.” It was Siminoff’s first experience where his team had a vision he was confident in, and he got a taste of someone telling him it couldn’t be done. He then used his resources and fierce commitment to bring his vision to life. “Cedar shingles were my vision and I needed to make it work. So, believe it or not, I cut individual balsa wood shingles and glued them onto the model house. I don’t know how many hours it took me, but I managed to complete it in time.”

And then there was the Shark Tank experience. “I was at lunch with a friend in 2013 who recommended I reach out to a Shark Tank producer he knew,” Siminoff says. “I sent the producer an email and before I knew it, I was walking into the Shark Tank with Doorbot and expecting a deal. However, one by one, the Sharks dropped out, and I walked out of the Tank with nothing.”

Huge disappointment? Maybe. But the word “quit” is absent from Siminoff’s dictionary. He rebranded Doorbot as Ring. “I knew Doorbot was a work in progress, but that didn’t stop me. Driven by Ring’s mission, I went back to the drawing board to create an even better version of the device and re-introduced the Ring Video Doorbell to the world. Funny enough, it was the exposure and resulting publicity from our Shark Tank appearance that enabled us to keep going.”

For the kid from Chester, New Jersey, the road to Ring’s success was not a straight one. “In fact,” he says, “many times, I questioned our path forward. This was my first hardware business, and it wasn’t easy,” he says.

You can see Siminoff perhaps one day authoring a self-help book on his above-described drive, emblematic of him since childhood. “Growing up in Chester, I learned the basics of engineering, entrepreneurship and invention,” says Siminoff, who now lives in Los Angeles, California. “I was into radio-controlled cars and Chester Hobby was an amazing place in town to not only buy these cars, but to learn from the staff on how to fix them. If my car was broken and I wanted to play with my friend down the street with theirs, I had to fix mine.  So, when my parents could not drive me into town, necessity became the mother of invention.  I figured out how to fabricate parts and tools and fix them on my own. This is was what really taught me mechanical and electrical engineering, those radio control cars might be one of the biggest influences in shaping who I am today.”

As was his family. “My parents taught me the importance and value of hard work.” Siminoff was an average student in high school starting out, B’s and C’s populating his report cards. Then came the challenge to become better. “I remember my dad and I were out in town and we saw the Land Rover Defender 90, and I said to my dad, ‘I would do anything to have that car.’ He told me to get straight A’s, and that’s exactly what I did. I went on to receive straight A’s my junior year, which ended up being a critical time for college admissions. While it was essentially a bribe, the hard work paid off in more ways than one by helping me get into a better college…and the car!”

There’s a good chance Siminoff “used those wheels” to head to his next stop, Babson College in Massachusetts, where he won a business planning contest, and then founded Phone tag and Unsubscribe.com. Entrepreneurship loomed big at that time. “Absolutely,” he says in agreement. “I’ve been an entrepreneur from a young age, whether I knew it or not. I would find creative ways to earn money during high school, talk to my friends’ parents who were savvy businesspeople and really do anything I could to learn more about business and entrepreneurship. When I got to Babson, I focused on honing my skills and launching my first few businesses.”

None bigger than in 2013. While  working out of his garage on several inventions, Siminoff realized he was continuously missing package deliveries because he could not hear his doorbell. “When I discovered that an internet-connected doorbell didn’t exist,” he says, “I built the first version of the Ring Video Doorbell, originally called Doorbot, so I could answer my door while I worked.” Yes, he no longer missed getting his packages, but there was an additional perhaps more important element. “When my wife used the device, she expressed how safe it made her feel when she was home alone because she could answer the door from her phone. From there, our mission of making neighborhoods safer was born. I’ve always said the real invention was the mission, not the product itself, but since then, the first Video Doorbell has evolved into an entire line of home security devices and services helping to bring peace of mind and make neighborhoods safer for everyone.”

Siminoff then appeared on Shark Tank, and the rest is history. In 2014, Ring Video Doorbell was brought to market and it’s been a leader in the home security space ever since. “I believe Ring is now one of the biggest companies to ever appear on Shark Tank, and following our appearance on the show, we’ve had a long list of impressive investors, including Sir Richard Branson.” Another interested investor was looming as well. “As we continued to build Ring and introduce our suite of new Ring security cams and doorbells to the world, the company attracted another mission-focused, customer-obsessed brand: Amazon.” It has changed his life, and he’s proud of their mission-driven approach. “From the initial invention in my garage to being acquired by Amazon, Ring has exceeded all my expectations. I have always worked to invent products that provide real solutions, for real problems. Building the Video Doorbell, I knew this product would not only provide a solution to a problem many people like myself faced, but also had the  potential to make an even bigger impact on neighborhoods everywhere. My team continues to bring more choice, affordability, and convenience to our customers each day and we are endlessly motivated to making an impact.”

Impact is a key word. Siminoff is consistently humbled by the stories from neighbors (“What we call our customers,” he says) regarding the number of ways his team’s products and services have helped them. “Be it reuniting a lost pet and their owner thanks to communities working together through the Neighbors app, or how our security cameras have helped families safely, and more easily, navigate this challenging time and stay in touch with loved ones – our neighbors’ stories never cease to inspire and amaze me,” he says. “I’m particularly proud of the recent program we announced with Habitat for Humanity to provide $1 million worth of Ring Video Doorbells to be installed on new Habitat homes built in 2021, providing families with added peace of mind in their new neighborhoods. We are always evaluating ways we can make a meaningful impact on local communities — and this is a great example.”

A big thrill for Siminoff was returning to Shark Tank as a Guest Shark. “I was the first entrepreneur to have gone from pitching the Sharks to sitting in a Guest Shark’s chair,” he says. “That was something I couldn’t have imagined even in my wildest dreams. It was a really proud moment for me. I was honored to return to the show as a Shark to assist others in achieving their dreams and further their missions to hopefully make an impact on the world.”

Siminoff is always working and inventing alongside the team at Ring  in support of their mission to make neighborhoods safer. “I’ve always said that this is a mission I hope never to accomplish, because when that day comes, it will be because we didn’t dream bigger and we could have achieved even more. We’ll continue to work towards delivering security and peace of mind to every neighbor – everywhere. Looking ahead, we are more committed than ever to providing the best possible experience for our neighbors. This means doubling down on offering whole home security in a truly seamless way and providing users with devices and features that intuitively work together. An important part of this experience will be continuing to keep user control, security and privacy front and center. We are driven by our customer obsession.”

As previously mentioned, the road to Ring’s success was certainly not a straight one. “I don’t believe in advice,” Siminoff says, and he’s lived the valid reason why. “All of our journeys are vastly different. I think learning from seeing and hearing about others’ experiences is important, but everyone needs to create their own path to what they consider to be success.”

When he looks back now at how he and his team were able to build Ring and overcome obstacles, three things do stand out as being key components. First is having a mission. “Ours was to make neighborhoods safer.  A mission defines what a company stands for and why it exists. For the team, it is a reason to work hard, to sacrifice for, and something to keep you focused. For me, our mission helped to keep me going and pushing forward, no matter what. For our customers, it creates a true bond that is more meaningful than just a transaction.”

Next, hard work. “Something New Jersey taught me was hard work and it certainly was needed to build Ring from both myself and the team.”

And finally, Siminoff says, there’s luck. “I’ve always said luck is like the lottery — the harder you work, the more ‘tickets’ you secure, but there’s always an element of luck to it. We worked hard, had a lot of tickets and thankfully, a little bit of luck on our side, too.”