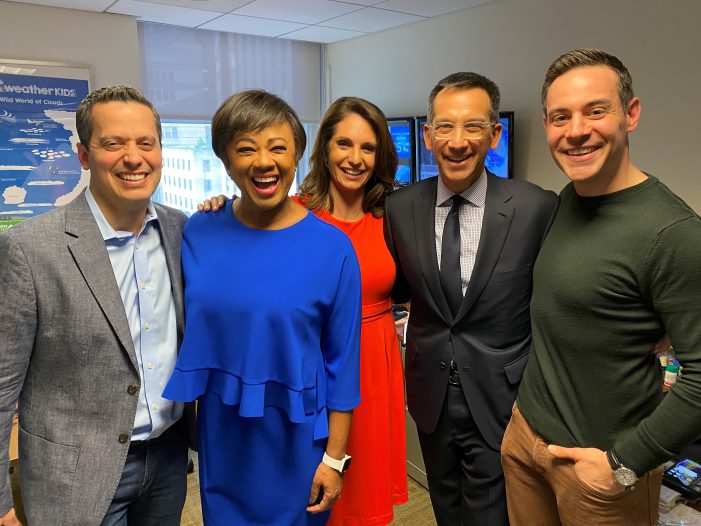 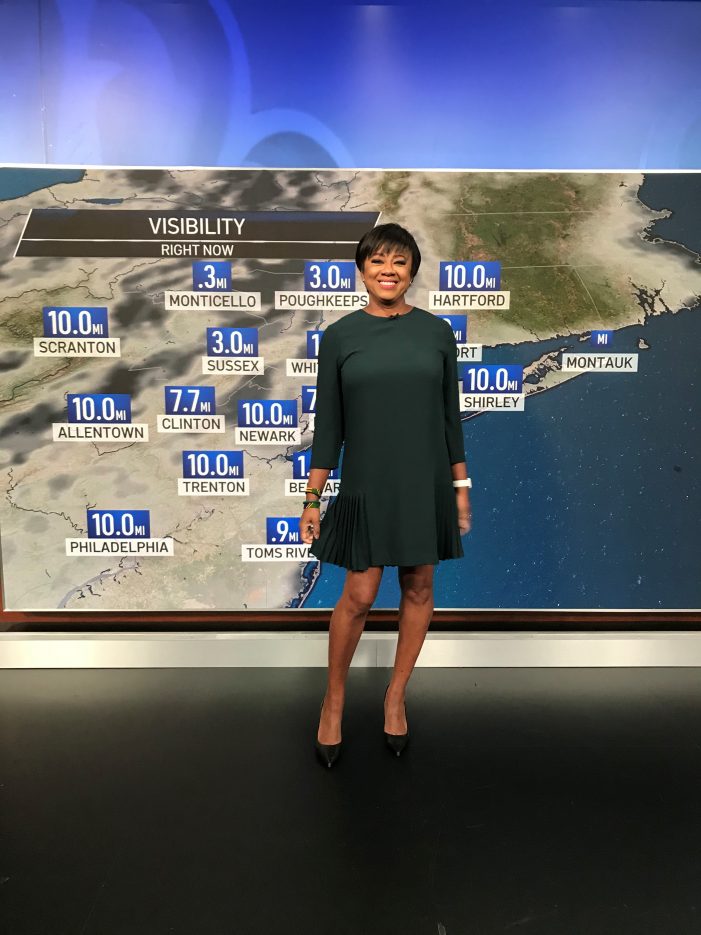 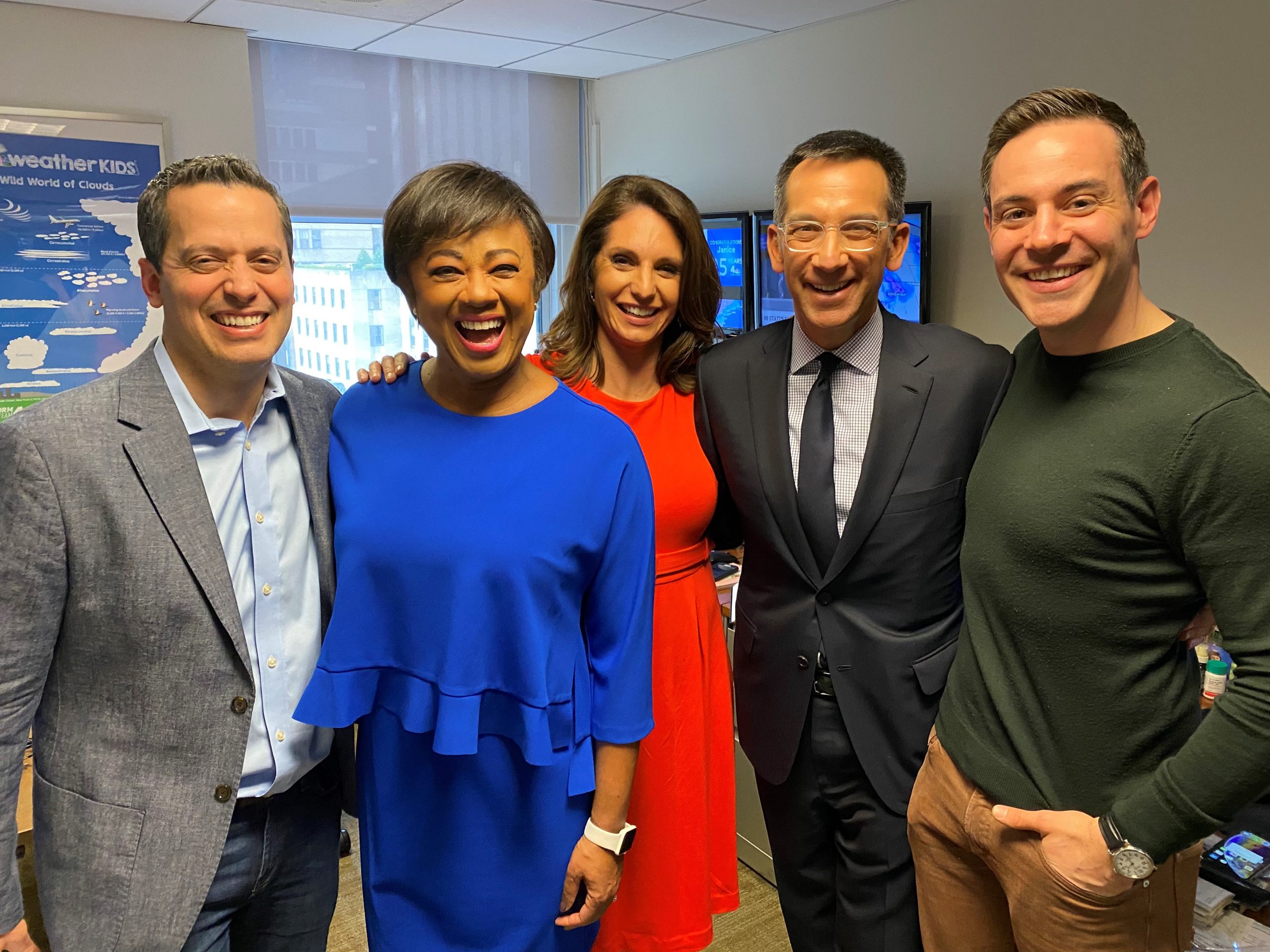 WNBC Chief Meteorologist Janice Huff’s accomplishments and accolades, among those being inducted into the New York State Broadcasters Hall of Fame in 2016 and being named in 2020 “Best Weatherperson in the World,” would fill the back and front sides of a page (a detailed bio can be found at www.nbcnewyork.com/author/janice-huff).

Her achievements being what they are, there is especially this: the accuracy with which she delivers the weather to millions in the Metropolitan area every day, and the care she has for others, cast the most significant light on her person and career.

“I had no plans of being on television, no plans of being in New York necessarily – I mean, it’s a dream to be here, for everyone really,” Huff says. “No matter what you do, whether it’s broadcasting or any kind of career, everybody wants to come to New York. I had always thought it would be great to be able to come here, but I never really thought about it in the scheme of things.”

And when told she has been coined by this writer as the “Meteorologist who always smiles,” she laughs and says, “Oh, thank you. I try not to smile too much when there’s mayhem and destruction, but that’s rare. So, the rest of the time, yes, the weather is usually pretty good.”

Huff lives in the Shongum area of Denville with her husband and their dog, Porter. Ironically enough, the dog was featured on an NBC “New York Live” segment called, “Clear the Shelters,” and it reminded the couple of a dog they’d had that had passed away the year before. The lucky pooch now has a loving, new abode.

You may also see Huff occasionally in downtown Denville, she a big Denville Dairy fan. “Best banana splits ever,” she states.

Huff , who was born in New York City on September 1, 1960, feels she was born to love weather. It has fascinated her since she was a little girl. When she first moved to South Carolina, she lived for a period with her grandparents, and they and most of her family lived on farmland (“Trees and woods and creeks and animals,” Huff recalls). Her grandparents had in their backyard a swing-set that, every day after school, their granddaughter would enjoy while daydreaming, peering at the sky as she swung, looking specifically at the different shapes and sizes of the clouds, and she would ask herself, “How does that work? What does that cloud feel like? How does that form?” “And storms,” she adds. “Watching those clouds shift and move and morph into these ferociously, dark and dangerous skies and storms, I would wonder what made that. How does the weather happen? My curiosity is what got me to seek out those things.”

When Huff was eight, her mother bought her a set of World Book Encyclopedias. As an only child, if she wasn’t with her friends, she was home reading books, many times her eyes in the encyclopedias. “I would pick a letter and go through it, start reading things,” she remembers. “And the one day I had the ‘M’ book was the day I discovered Meteorology.”

For young Janice, it clicked right away. However, as previously mentioned, she never really envisioned doing weather on television, but studying it from the science end of things. It’s why she chose to attend Florida State University. “They have one of the best Meteorology programs in the country,” she says.

Huff’s mom, a single mother, was her number one role model when she was growing up. “She was an independent woman, a leader and a strong person, and someone I looked up to very much,” Huff states. “She had lots of friends, she was strict, but fair. And she was my best friend. So, I couldn’t think of anybody more fitting to look up to as a role model and a mentor.”

Prior to FSU, Huff attended and graduated with honors from Eau Claire High School, where she was also a member of the National Honor Society and Secretary of the Student Council, a varsity cheerleader, and was named Miss Shamrock 1978. After graduating from Florida State University with a major in Meteorology, she in 1983 was a weekend meteorologist at WTVC, in Chattanooga, Tennessee, and that same year was Columbus, Georgia’s WRBL Meteorologist and science reporter. “I just took it one job at a time and enjoyed being the best in what I do. That’s kind of how it is. Living in Columbus, Georgia – I was only in Chattanooga for six months; that was the first stop and first TV job I had – and even that six months was rewarding.” Along the way were stops at KSDK in St. Louis, Missouri, and KRON in San Francisco, California prior to returning to the Big Apple – and home – in 1995.

“It’s beyond a dream come true, really, in a lot of ways, being here,” Huff says regarding delivering the weather afternoons and evenings. “Because, as you mentioned, I have come full circle. I was born in New York City, have lived in many parts of the country, grew up in the southeast, and coming back here is like coming home. It’s kind of an out-of-body experience when I look at it that way because that was not really part of my ‘plan,’ I guess you could say. But with plans, you usually don’t do them, because they don’t usually turn out as people expect that they will. But lots of times that’s in a great way, and it certainly was for me coming back here.”

As for the numbers of people she delivers the weather to daily, she never thinks about it. “I don’t even think about how many people are out there. The only time I ever think about it really is when someone comes up to me and says that they watch.” Oh yes, and that number includes a well-known face and voice to many. “I met Sidney Poitier randomly at a restaurant – that was a few years back at the Sea Grill, which used to be downstairs at Rockefeller Center – and that was a random meet, and when someone like that says that they watch you, that’s when you realize where you are and what you’re doing and how many people are out there. Otherwise, I don’t even think about the number. I just think about the job I have to do every day and that is to serve all those people, and bring them the best information, the most accurate forecast in any dire weather situation to get them out of harm’s way. That’s what I do, that’s what I’ve been doing ever since I started in weather in the National Weather Service when I was a student trainee before I went to college. It’s been since I was 17-years-old that I have worked in weather, and it’s been since I was 7-years-old that I wanted a job in Meteorology.”

An advocate of adoption, Huff started in the late 1990s the New York Chapter of WNBC’s “Wednesday’s Child” segment. “Wednesday’s Child’ I was a part of for a long time – almost 20 years.” The goal is to find homes and families for children in the foster care system. “We were the second site (the first was in Washington, D.C.), the second of what were ten sites across the country.” Of all the things she’s ever done in the business of television and broadcasting, “Wednesday’s Child” is probably her most important and rewarding. “Not just for me,” she says, “but for these families, because this changes lives. I mean, what I do with weather sometimes saves lives, in (that’s) terms of bad weather, severe weather, and trying to get people out of harms’ way. This (“Wednesday’s Child”) changes lives. I think that the over 300 children we’ve featured have found homes, found love and permanency. It made all the difference in their lives. I’m all about that, because I know how important family is, and how important structure is, and permanency, especially for these kids.”

Structure. Permanency. She has been that to her WNBC viewers as well. “I have been here 25 ½ years now, working on 26, and it’s still the best job I’ve ever had and the greatest place I’ve ever worked,” Huff says happily.

Janice Huff has advice for aspiring Meteorologists. “My advice is to go for it. Follow your dreams. Meteorology in particular is a science, and science is specific and uses lots of math and physics and all that stuff, but that shouldn’t be a hindrance. That shouldn’t be a wall. That shouldn’t be something that stops you. A lot of times I meet, and have met, young girls, starting out, interested in science, and they start taking math classes, and then they start to drop back, and they’re not as interested, or they think it’s too hard. It’s kind of sad because they decide to defer their dream or go in another direction because they think they can’t do it. But you can do it. I was one of those kids growing up where I was a very good student, but math was not my favorite subject.” Indeed, Huff loved science, but not the math part. “But when I studied Meteorology, I realized I had to do well in math. It wasn’t my favorite, so I had to work harder.”

She eventually did minor in mathematics and was able to fulfill her goals and dreams. “It takes hard work,” she says. “Anything you strive to do there’s going to be some work involved, one way or the other. You just have to buckle down, persevere, and if it’s something that you really love, don’t let anything stop you from doing it. Just go for it.”