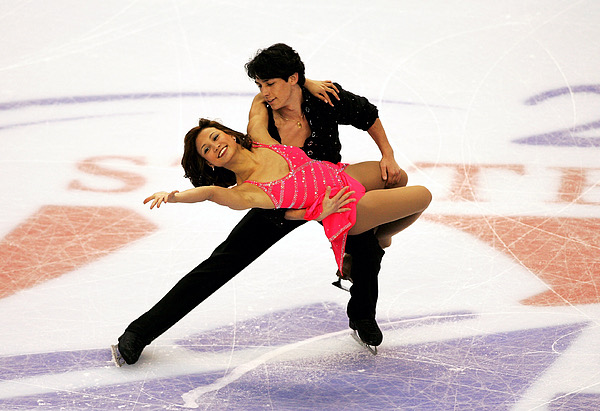 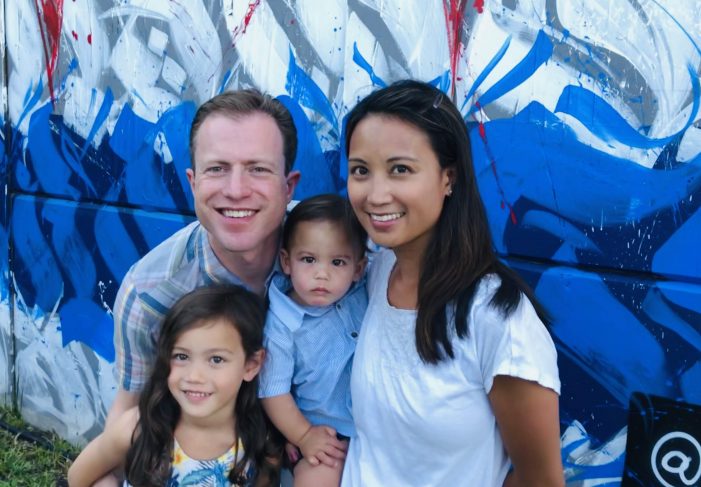 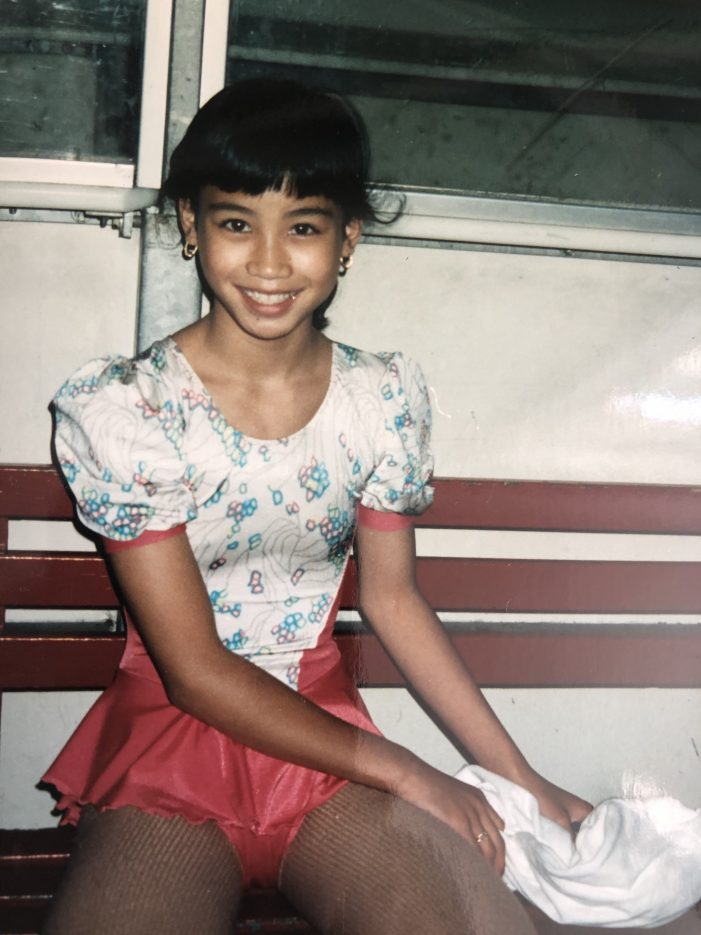 However, she has “lived it” through her husband Jeremy, he a coach at the 2018 Olympics in South Korea. “I guess I got to live it vicariously through him,” she states with a chuckle, “so that was pretty cool. Just because my husband and I have this shared passion because he was a paired skater himself – we met through figure skating at the training center at the University of Delaware – and the rest is history. So, going to the Olympics, whether as a coach or as an athlete, that was just a huge moment for us as a family.”

Goodwin’s life has been rewarding. She has her family, her job as a high school Speech and Language Pathologist, and many rich memories of when she performed with some outstanding partners, they pairing their skating talents with hers to attain lofty heights.

The 37-year-old Goodwin has been married since 2010, and she and her husband have two children: 6-year-old daughter Kajsa, and a two-year-old son, David. “That’s what I’ve always wanted, a family,” she says. “We all just love each other.  That’s number one.” Her job is number two. “Working with adults with disabilities, I’m so thankful I attained my master’s degree and focused on school.” She did have to leave competitive ice dancing, but if she didn’t, she wouldn’t have been (in her words, complete). “There was something else that I wanted in life other than figure skating. I’m very happy that I was successful in doing that.”

Goodwin was adopted after birth from Indonesia by Tom and Cecilee Goodwin of Randolph. “I try to go home as much as I can,” says the Illinois-located Goodwin. Goodwin, who also has a sister, Anya, attended the University of Delaware, majored in Psychology, and minored in Linguistics, and received her Master’s in Speech Pathology from Northwestern University. She teaches at Mundelein High School in Mundelein, Illinois.

Goodwin reflects with much gratitude about her younger days in Randolph. “I remember that it was a very safe

community, very easy to walk around by myself – my best friend, Meredith and myself would spend hours outside and go to the beach right on our lake (Shongum Lake) and we’d just ride our bikes around for hours. Again, it was a very safe community; my parents never had to worry while we were out during the day. I remember doing Indian Princesses with my Dad. Indian Princesses is probably one of my fondest memories with my Dad, where we were able to do the camping trips and go hiking together with their (her friends’) Dads, and that was very enjoyable.”

Her Mom and Dad started Goodwin and her sister off in group skating classes at Mennen Arena when she was 5 years old. “My parents supported us fully,” she says, “and you have to have a lot of commitment for the sport, so we did decide to eventually go with just figure skating. I was doing dance as well as gymnastics, and then the figure skating all at one time, and we had to get to that point where we had to choose one.” Goodwin says that is one of the things she likes about her parents, is the fact that they exposed her to many things. She now does the same for her own children. “I think because of that my parents were very supportive, putting everything into figure skating for us. Without that support, I never would have gone as far as I have gone.” Goodwin fondly recalls her Dad, suit on for work, driving her to early morning practices at 6 a.m., where she would skate for a couple of hours and then head to Center Grove Elementary School. “That was every morning for me,” she remembers. She also did camps and skating camps in Canada, Colorado, and Lake Placid.

In middle school she discovered ice dancing, which she describes as “Ballroom on ice.” “I started ice dancing with my coaches at Mennen Arena – Colleen O’Connor and John Powell – they really got me into the ice dance part of it. You’re going to be with somebody when you’re out there competing out on the ice. That’s what I liked: the idea of being out on the ice with somebody else, practicing with them and performing with them, and not just being alone out there.” She continues, “The ability to express, that is a huge thing in ice dance. I’m really very naturally introverted to be honest with you, and I think growing up with skating as a commitment kind of made it harder for me socially, so partnering was a huge social outlet for me where I was able to express artistically as well as socially, having somebody with me and learning that way.”

Goodwin’s initial two national pairings were with Paul Goldner and Ty Cockrum. Her Mom, seeking an ice dance partner for Kendra, sent her photo to all the coaches around the United States. “I tried out with Paul first and it went really well. We developed a partnership. I was a freshman, I believe, in middle school, and our Moms drove us everywhere. He was from New York and I was from New Jersey; his Mom would drive 45 minutes to an hour to meet us in New Jersey, and then vice-versa we would go up to New York.” Cockrum was a little further away – Seattle, Washington. “We went out there, and the trial went really well,” Goodwin says. “The coach was great, and my parents were willing to give me the opportunity to let me move out to Seattle when I was 16 (she was a high school junior) to pursue ice dancing with Ty.” It was a culture change for her. “Not the typical teenage life,” she says with a laugh. “I grew up really quickly.”

Goodwin’s greatest success came with partner Chris Obzansky. Competing in the junior level, the duo captured 1st place in the 2000 Junior Grand Prix event in China, and they were also the 2001 United States Junior National silver medalists, and also finished 15th at the 2001 World Junior Figure Skating Championships. It was quite a run of success, and then the partnership bond was broken when Obzansky chose to serve as a Mormon missionary. “It was huge,” she says of their parting. “It really opened up my eyes to understanding his faith, in general just understanding the commitment involved. Not only did Chris have figure skating, but he also had his faith and religion, and I had to respect that. I couldn’t be mad at him for anything about it. I was very upset, but this was something that he felt he needed to do at that moment and time, and it was hard – it was definitely a challenge for me because of the sacrifices I had made with moving around, with moving to Delaware to skate with Chris. There’s a lot of sacrifice that goes into this sport, and a lot of times the girls sacrifice more so than the boys, because there are more girls that are looking for partners than boys. I felt like we were at a pivotal moment in our career, but there was nothing I could’ve done about it. It was something Chris really wanted, and I had to support that.”

“At that time, we really could’ve been a very strong team nationally and internationally as we grew up if we had had a longer partnership.”

News spread of Goodwin’s seeking a new partner, and she found one in Brent Bommentre, whose close proximity to Goodwin’s Delaware (he was in Philadelphia) was perfect. And that wasn’t all. “I think our personalities really went well together,” Goodwin says. “Brent is very personable, he’s very friendly, very outgoing, very funny. I really appreciate humor, so there was a lot of laughing in our partnership.” And serious skating as well. The team won a pewter medal at the 2004 United States Championships and also took part in 2004 Skate America and the 2004 Cup of Russia. “I felt like it was a very positive experience with Brent.”

The partnership disbanded early in 2005, and Obzansky rejoined Goodwin on the ice for the rest of 2005 and 2006, and then Bommentre was back in 2008. “I feel like I really grew a lot through those partnerships,” she says, “even though there were many of them.” Her parents were fonts of wisdom once more, telling her that from each partnership she’d learn something new, and the same thing with the coaches. “I really like that philosophy of not being fearful and just giving it a try and doing the best you can under those circumstances.”

Goodwin still occasionally laces on her skates. “I do – yes, I do,” she says with glee. “I work very part-time and I do have a couple of students that I work with.”

Although inspired by fellow skaters in her life, her parents are tops to her. “Especially now that I am a parent, just looking back at everything that they did for me and for skating, and the trust that they must’ve had (for me) as a teenager moving out to Seattle on my own, I think that really promoted that hard work ethic and that really supported the belief in me and gave me more confidence. They trusted me and respected that and they knew I was going to be responsible and make good decisions. Because of that, I grew as much as I did.”