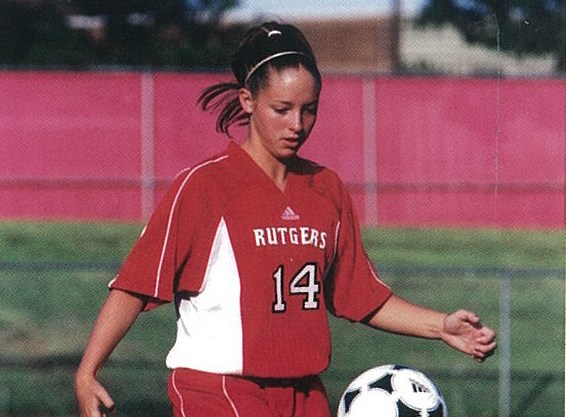 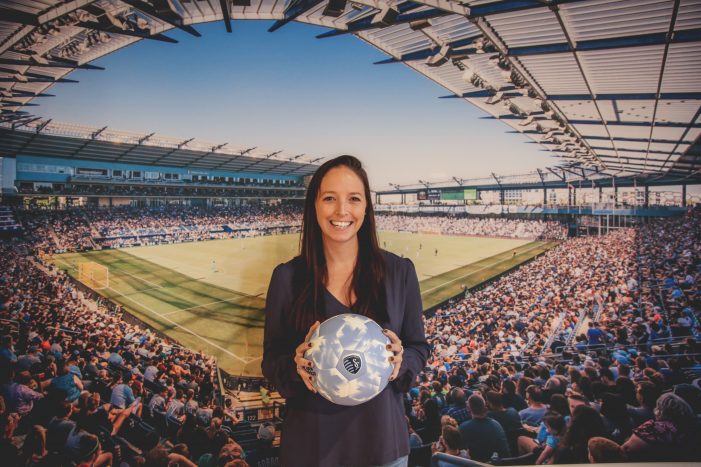 Meghan Cameron during her days at Rutgers

Meghan Cameron speaks with an elevated spirit, and when asked if she is indeed a true Jersey girl, she immediately states, “Oh yeah!”

However, currently 2 ½ years into her role as Sporting Kansas City’s Assistant Director of Player Personnel, she sits in the team’s clubhouse, confirming she is enjoying life in a land where BBQ reigns supreme. “It’s been a good change,” she says, “but it took a while to try and get used to. To be in the Midwest, especially being  away from my family – my brother has three kids – so it’s difficult not to be around them and being able to see them as often as I would like.” And, there is the heat. “It’s definitely hot here; I’m looking out at training out there and I’ll head there in a few minutes, but it’s 97 degrees.”

Cameron, 37, loves soccer, and has been involved with it since childhood. Her current position with Sporting Kansas City includes aiding in player recruitment, development and retention, scouting, contracts, and she is the first female member of a Major League Soccer coaching staff to manage player contracts. She also worked for the D.C. United sales team from 2005 – 2008, and from 2009 – 2017 for the MLS’ New York City office in a variety of roles, including Senior Manager of Player Relations, aiding teams in managing their respective rosters and their budgets, approving player acquisitions and trades, and overseeing the league’s competition calendar. Earlier, while she played at Rutgers University, she interned for the New York\New Jersey MetroStars.

Cameron, who grew up in Roxbury, reflects. “It’s interesting. Obviously, being out here in Kansas City now and working with Peter (Vermes, SKC Head Coach), who is also from New Jersey, we often talk and joke about being from New Jersey, and how it’s so different and a different attitude. I think a lot of that comes with growing up in Roxbury and north Jersey. I had an older brother (Bradley) who is four years older than me, and so I had to do everything he was doing. He played soccer, I played soccer. And so, kind of back to my dad and also my mom (Bruce and Joan), they just did everything they could to let me do what I wanted to do. Also, at times you don’t realize the sacrifice until you’re older and then you’re like, ‘Wow – that was massive!’ As was being able to play for PDA (Players Development Academy of New Jersey) at such a young age, Cameron a member of the second team ever to play there. “They’re a massive powerhouse now, especially on the female side. So that’s a pretty cool experience, to be able to grow up in north Jersey, grow up in Roxbury, obviously playing for Roxbury High School and playing for Doug Shanks and the success we had there. I didn’t realize it at the time, but all my family did for me to be successful on and off the field is the reason where I am today.”

When Cameron was a freshman in 1997, the Roxbury girls’ soccer team not only won the NJSIAA Group IV championship, but also “scored” a guest appearance on an episode of The Sopranos. When a graduating senior, she had the goal scoring record for girls’ soccer at the school and was an All-Morris County and All-State striker and midfielder. She then attended Rutgers University and, when she was a freshman there, the team reached the  Sweet 16 of the 2002 NCAA Tournament. Cameron in her 2004 junior season was awarded Big East Academic All-American honors, and she graduated with a Bachelor of Arts degree in Communications in 2005. She loved the New Brunswick atmosphere of the state university. “That’s a big reason why I chose Rutgers.” She explains. “When I was going through the recruiting process, the advice that had been given to me by my high school coach, Doug Shanks, was you have to choose a school you want to be at if you’re not playing soccer anymore. That was why Rutgers wound up being my choice because I knew that that was the school I would be happy at, I would excel at, if soccer was not involved.”

“I didn’t go just for soccer; I went for the holistic experience.”

Shanks’ wisdom played out. Cameron’s playing days were soon to end due to a concussion. “That’s a big piece of the puzzle, obviously,” she says. “I had sustained quite a few concussions over the years. The spring of my junior season, we were in spring practices, and I sustained another concussion, struggled with post-concussion syndrome probably for about 3 ½ months.” However, at the time she had been interning with the MetroStars, spent the summer there, and coincidentally as the fall season approached, four specialists confirmed that Cameron has laced her cleats on as a player for the last time. After finding out, she was devastated. “It actually crushed me,” she recalls. “Living with my teammates, having them go out to train every day and having them go on these away trips, I was just left at home.” Things did work out, however. “I was thankfully able to double up my internship and extend that for another six months, went from the marketing to the PR department for the MetroStars. That was kind of always the most important thing for me. It was something  that had brought me so much joy growing up, and I always just played because I loved it. Obviously I had success on the field, but it more came down to I just really enjoyed it and it made me very very happy. So, to be able to extend that off the field was a way for me to stay connected to the game.”

With the D.C. United, she worked  inside sales as a way to get her foot further in the door (“To learn the grassroots of how a club runs,” she says).  She learned a lot, especially about herself, and that she was bad at sales. After a few years, she transferred to manage the club’s charitable arm, running golf tournaments, awards ceremonies, and player appearances.

Ultimately, one day she called her dad, telling him it wasn’t for her, and her D.C. United boss also said something that had sticking power: “If you don’t like what you’re doing, don’t spend another day doing it.” She exited less than a month later, moved from the nation’s capitol back up to the Garden State, and took the MLS job, where she worked with another Rutgers connection,  at that time Senior Vice-President Lino DiCuollo.

She was more than prepared for the job. “It was the best job for me at the time, and it set me up for where I am today.” Per Cameron, if she had not been as involved as she was during her MLS days, she’s not sure if Vermes would’ve contacted her for the Sporting Kansas City vacancy. “Obviously, I made a reputation for myself, being really efficient, really organized, excellent communication, and I started to become the person that a lot of other clubs were calling for answers. If I didn’t have it, I’d say, ‘I’ll get the answer for you really quick and I’ll call you back.’ That’s just kind of been what I’ve built my foundation off of.” Todd Durbin, MLS Executive Vice-President of Competition & Player Relations, also early on advised, “You have to do the little things right. If you’re too above doing the little things, you’re never going to get to the next level.” Cameron ran with it. “So, it’s really about building the foundation and doing those tiny little things that nobody else wants to do, and doing them well, and you’ll get noticed.”

Again, although she is indeed the first female member of a Major League Soccer coaching staff to manage player contracts, Cameron feels Vermes called her for her work ethic alone. “For me that’s most important,” she says proudly. “Peter did not hire me because I’m a female, and Peter did not hire me to hire the first female on a technical staff in the league. Peter hired me because he thought I was the best person to fit with this club in this role. And the culture here at this club is second to none. It takes a certain personality to succeed here, which is why this club has been so successful for as long as it has.”

Meghan Cameron is most thankful in life for her upbringing: growing up where she did and the people who she grew up with. “You’re shaped by the people around you,” she says. “The good and the bad experiences make you who you are. I think I’m most thankful for the experiences I’ve had in my life. Maybe,” she adds, “if I really had to think about it, maybe it’s my concussions. As terrible as they were, I’m very thankful I don’t have any long-term effects at this time (except maybe a little light sensitivity, forcing her to wear sunglasses outside).  But I think that experience of having to overcome that devastation of not being able to play the game I love anymore, has kind of given me the opportunity to get where I am today.”