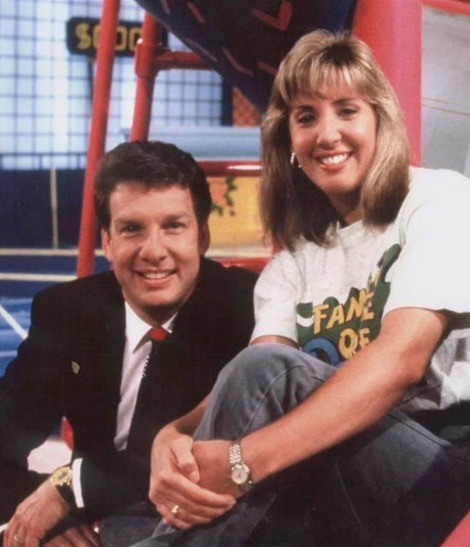 “We had a really great grade at Mountain Lakes High School,” Russo says excitedly. We have all kept in touch. It just was some of the best memories.”

One thing you “get” while in discussion with Russo is her gratitude for her life, her family, her work…everything.

Russo, who is originally from Fairfax, Virginia, moved with her parents to Mountain Lakes in 1977 when she was in eighth grade. “My dad and mom are my mentors,” she says. Len (short for Leonard) and Dee (short for Delores) she calls “the best parents around.” “They are alive and thriving and couldn’t be better parents and grandparents. My father and mother from a very young age pushed us to follow our dreams. They never said, ‘You have to do this,’ or ‘You’re a woman, you can’t do this.’ My dad always said, ‘If you want to be a nurse, that’s fine, but if you want to be a doctor, that’s fine, too.’ They were instrumental in all three of us being successful.”

Her eighth-grade class was in Mountain Lakes High School, and she didn’t have her two sisters with her. “I have a sister named Tammy and a sister named Lani,” Russo explains, “and they were both in college at the time, so it was only me who moved to New Jersey.” The Marella (her maiden name) family had moved to New Jersey because her dad was offered the athletic director’s job at West Point. He didn’t get the job, but did get stationed at Picatinny Arsenal. “I had the best childhood ever in that town (Mountain Lakes)” Russo recalls. “I loved every bit of it. Like I said, we were in the high school at the time. I never went to the middle school because I started immediately in high school in eighth grade, so I never experienced elementary and middle school in Mountain Lakes.”

Russo played soccer, basketball, and softball in high school, and continued the hardwood next at Manhattanville College in Purchase, New York. “Sports definitely made me appreciate what it is to be on a team,” she says. “I ended up playing basketball and soccer in college and the only reason I played soccer was to keep in shape for basketball.” And she had a proposed career mapped out. “I always knew I wanted to go into communications,” she says. “I majored in Communications and Political Science, wanting desperately to have a career in sports. My goal was to have a career in sports and be a sports broadcaster.”

And then came a call from her best friend to this day, Ann Sundius Rose, also from Mountain lakes. “35 years we’ve

been friends,” Russo says. “She was living in Philadelphia at the time and working, and came upon the show on this Nickelodeon channel that I really had never heard of much, and that they were doing this show called Double Dare. And she said, ‘Do you want to come in and be a production assistant?’ I was right out of college. I literally had just graduated. I came in and, at that time, I always knew I wanted to go into sports, but I said to myself, ‘Let me see what’s going on here.’”

Russo loved Philadelphia, where the show was being filmed at WHYY, and visited the show and the Nickelodeon team. “At that time,” she recalls, “it was a free-for-all, people just running around. Nobody really knew what their role was. You were allowed to do everything, you were answering phones, you were doing this and that. So, I get in there knowing that I probably would only be there for a month or two because I really wanted to go into sports, but it was good for my resume to see what a television production would look like.”

The rest is history. She was initially a production assistant, but host Marc Summers handpicked Russo to join him on air, his selection of her changing her life. “He liked that I was athletic, and every time that we would talk, I would make him laugh and he would make me laugh. It’s just and unbelievable rapport that is still going on 35 years to this day. At first, I did a little bit of nothing; just handed him stuff and you’d see my arm or my hand. Then, he started incorporating me more into the show, and then it became the Regis and Kathie Lee of children’s television. And, we’ve been going ever since.”

Russo and the Double Dare Live Tour completed a two-year road show at the end of 2019. “I can’t remember many bad times,” Russo says of her time with the show. “You get tired, of course, because you’re doing five shows a day and audiences are coming in and out. We went from Philly to New York, back to Philly, then to Florida. And when the road show was at its height, we went from playing at malls to playing at the Palace of Auburn Hills in Michigan for 25,000 people! It was highly successful, and to this day we’re still laughing. We have so much fun.”

Russo credits Summers and the fact that they were able to just be themselves for Double Dare’s longevity and popularity. “The beauty of working with Marc is it. I think that’s why it’s been such a success all of this time because what we’re doing is not fake. This is how we are. We were just living on a bus for two years. I can’t tell you how many times we would just be having laughing fits. He is one funny man. Remember, he started in comedy. We had a ball, and my role became much bigger at the end because it was just Marc and I. I am so blessed to have worked with a man who let me just be myself. And that’s where the success came in; what you saw is what you got.”

When the show’s initial run ended in 1993, Russo still was attached to her sports broadcasting dream, and did interview at ESPN and had a job offer, but turned the job down. “I thought, ‘Why am I leaving Nickelodeon?’ I knew it wasn’t the end, put it that way. I knew it was too big to end. I knew that we were either going to do the TV show again or the roadshow was going to go back out again.” The roadshow went out once again and was highly successful. “I remember going from Maryland to California, California to Maine. It gets tiring, sure, but it’s fun. You’re not sitting behind a desk and saying, ‘Oh my God – how am I going to do this? Instead, it’s ‘Oh my God, this is so much fun! A little tiring, but this is so much fun.’” And remaining with the network rewarded Russo: she got her sports. Nickelodeon started to incorporate some sports into its broadcasting. “I remember 1993 being sad that the TV show was over maybe, but I knew that there was more to come.”

Russo, who also co-hosted What Would You Do? on Nickelodeon, has two children. Son Ryan is a senior at Ithaca College, and daughter Casey is studying Film and Production as a Penn State junior. “I love being a mom. It’s my greatest accomplishment, my greatest joy.” And she’s loved living in Denville and raising her children there. “Denville is a great town. It’s always named one of the best towns, and my kids, even in college, they still come back and they see all their friends. It’s just a great little town.” She then adds, “I have a wonderful husband. His name is Frank, and he is very supportive of my career and anything I want to do. As a matter of fact, when Casey was a senior in high school and Ryan was a freshman in college, Frank had to hold down the fort because I was living on a bus for two years. People forget that aspect of it.”

Russo is still living the dream. “I love that Nickelodeon has provided me with memories, and still more memories to come,” Russo says. “And I love the fact that those are my lifelong friends. I still talk to almost every crew member from Nickelodeon. When Marc and I were doing the road show, these people came out on the road just to visit us. Lasting relationships, lasting friendships, and unbelievable memories. And who gets to throw pies for a living and enjoy it?!”

Double Dare again may hit the road when the pandemic calms, and Russo will again hop aboard the bus, and smile when doing so. “Make sure you follow your dream,” she says, “I try to mentor girls all the time and say, ‘Follow your dream.’ Your dream can be anything. If you want to be a mom and housewife, that’s great. Be respectful of everybody else’s dream. Fortunately for me, I’ve been doing this for 35 years and I have never had so much fun. I don’t think anybody’s job can compare to what I’ve done.”