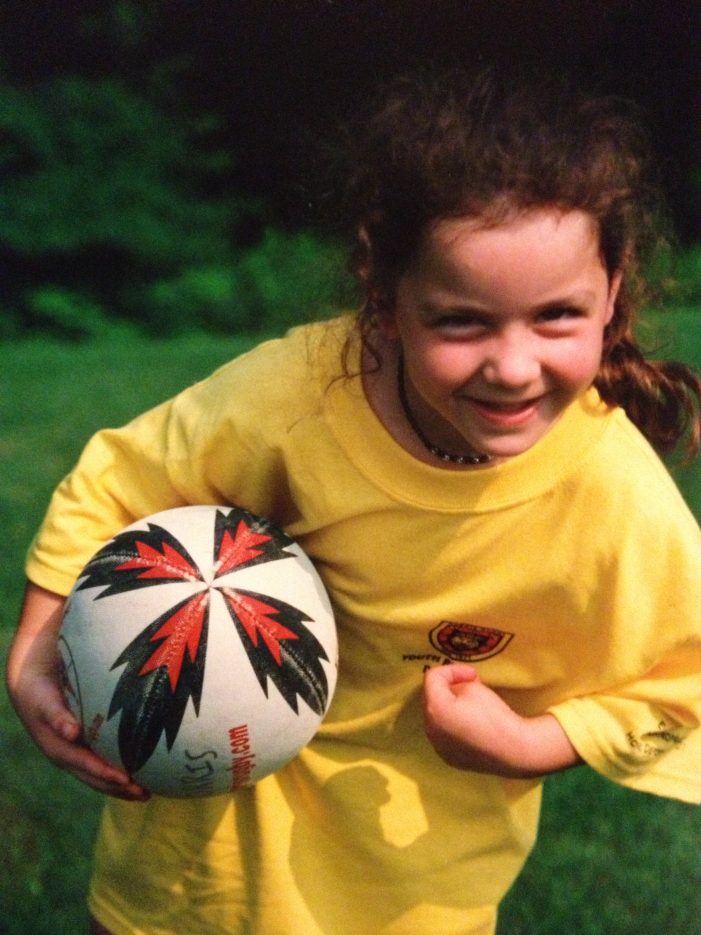 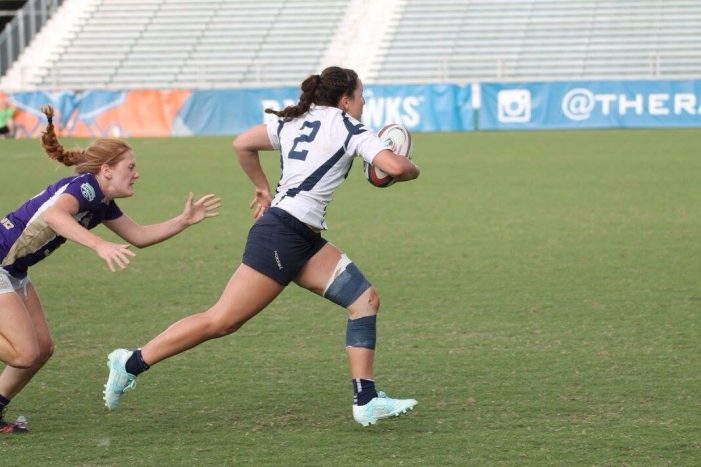 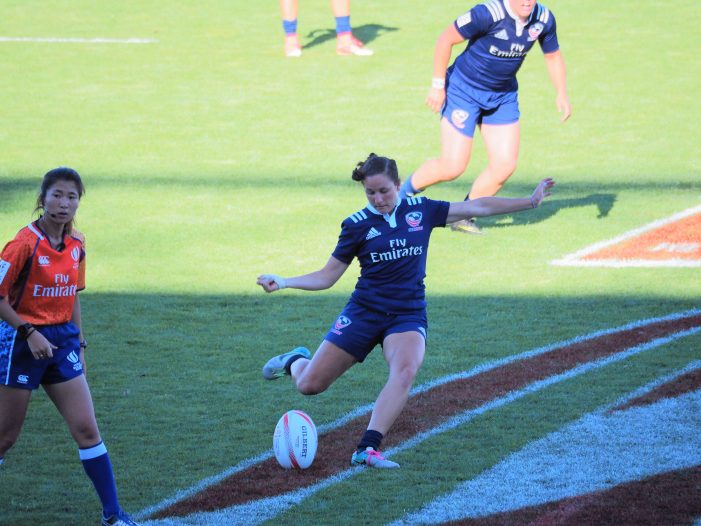 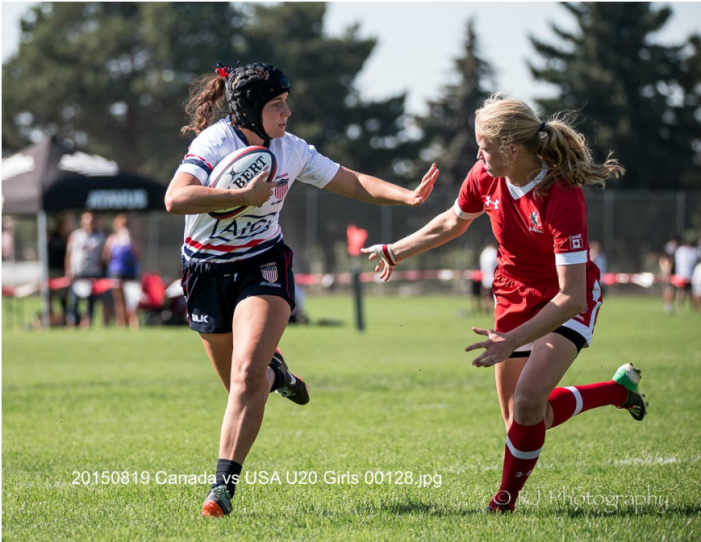 “I had given so much time and effort,” she excitedly recalls, “and the first time I got to jog onto that field in the USA jersey at the World Cup in Ireland, and my family was in the stands, it was really an indescribable feeling – just like pure joy.”

“Pure joy.” Those two words define Feury and the life she has lived. You both hear it in and feel it from her voice.

Feury, who was just 18 years old  that day in Ireland, is 24 now and a full-time registered nurse at Morristown Medical Center. “Back in March, April, and May it was definitely busy,” she says, referring to the COVID19 pandemic. “It’ definitely slowed down now, but those first couple of months were very busy.”

Feury, in addition to playing rugby since age four, also started playing soccer for the Denville Diamonds at the same age, ran track, and even played in the township basketball league.

However, it’s rugby for which she is famed, and a lot of that credit goes to her dad, who played rugby while attending Rutgers University. He then started a family and he played for the Morris Rugby Club men’s team. “He said, ‘I want my kids to play rugby,’ so he started a youth flag rugby program (called the Denville Dawgs) in Denville, which I think now has expanded to almost ten towns,” Feury says.

Tom Feury indeed sowed the seed of a sport he loved in his daughter’s heart, and her mom, KJ, planted the healthcare seed. “She never actually played rugby,” Feury says, “but with her nurse practitioner background, she’s been like the athletic trainer.” Her older brother, Blaze, played rugby at Penn State, and middle brother, Jake, is a member of Rugby United New York in the  Major League Rugby men’s league. He was also both a high school and college All-American at Delbarton in Morristown and Middlebury College in Vermont.

For Feury, her childhood is a memorable one. “I absolutely loved growing up in Denville. I love Denville so much. I

have my best friends, all the ones I met playing sports in Denville as little kids. I just think that Denville has such a good community feel. I feel like all through my rugby, I feel like all the things I have accomplished, they have supported me through the whole experience.” Denville Dawgs in the summer was tops. “It’s co-ed, and there’s not many co-ed sports for youths. That was in the summer, it was only eight weeks, it was just like very free-spirited and fun. It was a great way to meet other people and kids in town. It was awesome.”

Flag rugby came to an end when Feury was 14. Because her high school, Villa Walsh Academy, didn’t offer a rugby program, she proceeded to the next realm, the sport’s tackle version, for the Morris Rugby Club – but in her sophomore year of high school. She explains. “To be honest, I didn’t want to go on to play tackle. I was convinced that I wanted to keep playing soccer and give up the rugby thing, and I didn’t actually play rugby my freshman year of high school.” She attended games and the realization hit that she had given up something she had learned to love. “I realized that I was so lucky to play such an amazing sport at such a young age, and why would I give that up?” The transition wasn’t that difficult, and her two older brothers are partly to thank. “They roughed me up a bit,” she says with a chuckle.

When Feury was 18, she was named to the high school All-American team (“The first big thing in the USA level that I had accomplished, and it was really exciting,” she says), and she realized that she could go further in the sport. “The friends I’d make from across the country, the places that I could travel, all of that kind of set my mind that I wanted to do this – play at the highest level that I can.”

She continued to ascend towards the apex. After her senior year of 2014, Feury captained the United States Girls team at the 2014 Summer Youth Olympics in Nanjing, China, and then was named a member of the Women’s Junior All-American team. “I spent a month over there (in China),” she recalls. “That was a very cool experience because that wasn’t just a rugby event; there were other sports, athletes from all over the world. And by the end of that year I was named to the Junior All-American team. I kind of graduated my way up from the high school All-American team, and that was also the year, that fall, that I started at Penn State.”

What did that year of accolades showered upon her do for or to her? “Senior year of high school was awesome. Because I was so lucky to start playing rugby so young, I feel like through high school I was kind of forced into a leadership position. I was forced to be a leader from a young age; I was forced to develop those characteristics. The mental strength a leader should have, the communication they have to have, that undoubtably set me up for success – especially leading into that senior year. That senior year I was on Cloud 9. It just can’t get any better,” she says. “I had the amazing support of my family, and I had another four years of college to look forward to.”

Feury wanted three things in a college: strong nursing and rugby programs, and a school that would give her a ‘college experience.’ Penn State was the perfect fit. “It was funny,” she says, “because when I was talking to the rugby coach at Penn State and said I wanted to be a nurse he said, ‘Oh, we’ve never actually had a nursing major on our team before.’ And I was like, ‘I don’t know if that’s good or bad,’” she recalls with a chuckle.

It was incredibly good. The nursing program was a competitive one which required much of Feury’s time, but she was determined and had her eye on the profession she had desired since she was young. Doing rugby and school, however, was a challenge. “I had to prioritize my time. There were times I missed team workouts and had to do them on my own. I really had to have open communication with my professors. Every weekend we’d be leaving for our games and we would leave on Friday and I’d miss all of my Friday classes. For most athletes, they’re able to work around that, but for nursing, the curriculum is pretty heavy. My professors kind of saw my aspirations with rugby and were able to work with me, which was great.”

“I didn’t sit down a lot,” she adds. “I was either playing rugby, studying, or socializing, because I didn’t want to miss out on my four years, either.”

While at Penn State, Feury played for the United States in the Women’s Super-Series in Utah, and then also, as previously mentioned, played a year later for the United States Eagles in the 2017 World Cup. She was a collegiate All-American all four years there for national champion Penn State, and in her freshman season, she was named Most Valuable Player in the national championship game.

The air in that Cloud 9 had not dissipated.

Feury’s peak, of course, was stepping onto the field to take part in the World Cup. “The World Cup really left me speechless. It was something that – playing at that level – I had set up a goal for myself early. It was not an easy road. When I was in high school and early in college, I was one of the few girls who had a lot of rugby experience. So, I kind of took those leadership positions, and rugby came a little more natural to me. But at this (World Cup) level, everyone had been playing rugby a long time, everyone has a lot of experience, and it’s very very competitive. And I was also one of the youngest girls on the squad, so I was kind of in an unfamiliar environment. Just making the team, I was ecstatic.”

Feury now plays for the New York Rugby Club of the USA Rugby Women’s Premier League, which is the highest women’s club rugby that can be played in the country. Her 3-days-per-week, 12 hour a day nursing schedule fits perfectly with her game schedule.

Tess Feury sums it all up. “The experiences and memories I’ve been able to make, travel the world with my teammates and my family, it’s just something I’m just so grateful for. I really think that’s the biggest reward that has come out of it. I mean, getting to wear the USA jersey, and sing the National Anthem to represent your country, and just to realize that you’re playing  the sport for more than just yourself, it’s extremely rewarding.”

“And having a great family and teammates by my side makes it that much more worthwhile.”