OPINION: Diary Notes: Washington Puts a Dark Past To Rest 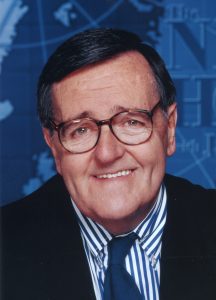 Attention readers: Mark Shields is off this week. Please enjoy the following column by Jamie Stiehm.
The city starts a new season, after Sept. 11 remembrances. Congress returns from summer recess. In the Capitol press gallery, you hear a bubbly chatter as if we’re going back to school, a new beginning.
Could we be turning a corner from a mob storming the Capitol, an impeachment trial and the pandemic? As a witness to all three within these marble walls and halls, I so want to say yes.
Let me share some diary notes from the dome.
The lost war in Afghanistan colored the elegiac 9/11 moments — since that day led to the war. The high-noon sun beat down on House Speaker Nancy Pelosi and other leaders gathered on the Capitol’s East Front steps.
The Speaker had the Marine Band play “God Bless America” for old time’s sake. Twenty years ago, Congress sang that song as the sun set on 9/11.
Abraham Lincoln was inaugurated on those very steps. The dome he built was the target of the doomed United Flight 93 plane, which passengers forced to the ground.
Nearby, Secretary of State Antony Blinken gamely faced a committee pitching hardballs on the chaotic Afghanistan withdrawal.
“We inherited a deadline (from former President Donald Trump),” Blinken said. “We did not inherit a plan.”
Years ago, Tony told me what a government “principal” was. Now he is one.
Across the plaza, a gleaming building bears the motto, “Equal Justice Under Law.” Very nice.
The Supreme Court upheld a Texas law that a former law clerk for the late Justice Antonin Scalia invented, letting vigilantes loose on reproductive rights.
At midnight, the unsigned opinion was joined by the only woman on the anti-woman side, once a “handmaid” in her religion, Justice Amy Coney Barrett. She who stole onto the Court while Ruth Bader Ginsburg’s body cooled in the parlor, days before the 2020 election.
As burned as we are at the Supreme Court, Texas earns even more ire. The statehouse retrenched voting rights this summer, at the governor’s urging. Gov. Greg Abbott is also a sworn enemy of COVID-19 vaccine mandates.
The Lone Star State is its own country. So, Texas, you’re invited to secede. I wouldn’t miss you. Lincoln opposed letting the largest slave state into the Union in the first place.
Rays of light smiled on a standout weekend night by the Lincoln Memorial and the Reflecting Pool. Thousands gathered to picnic at a free concert of the Broadway musical, “Come from Away.”
It tells the true story of 7,000 airline travelers landing in Gander, Newfoundland, on 9/11. They were bedraggled on a “giant piece of rock in the middle of the ocean.” The townspeople welcomed strangers from all over the world into their homes and hearts.
Thanks, Ford’s Theatre, for this dreamy gift, a tonic to raise a glass to Canada. The scene was the happiest I’d seen the city in so long.
Next morning, I went to a funeral mass for an ink-stained editor, Al Eisele. He was a friend to all by name: the barista, news agent, homeless guy, deli owner.
On 9/11, Al’s friend David McCullough, the historian, was over at the fancy Hay-Adams Hotel. He called Al and said, why don’t you come over here?
Al brought two young reporters to witness the towers fall and the Pentagon burn with McCullough — and wrote a column about it.
Back in the press gallery, a police officer passed by, back from a wartime deployment. “I was safer in Afghanistan (than here) on Jan. 6,” he said.
That sank an arrow in our banter. That happened: 140 police officers injured in the Capitol melee. We heard gunshots right by the House chamber.
The saddest siege ended before dawn. Democracy won, but not by much.
They say the Trump mob is coming back Saturday. Deport them to Texas or Gander.
As the fall season starts, Democrats need every player on the field, like that former quarterback, Sen. Joe Manchin of West Virginia. They are thinking big, real New Deal lawmaking aimed at the future.
Lincoln led us out of the dark toward the light.
It’s in the air, a clear chance to go further forward.
Jamie Stiehm may be reached at JamieStiehm.com. To read her weekly column and find out more about Creators Syndicate columnists and cartoonists, please visit creators.com.
COPYRIGHT 2021 CREATORS.COM