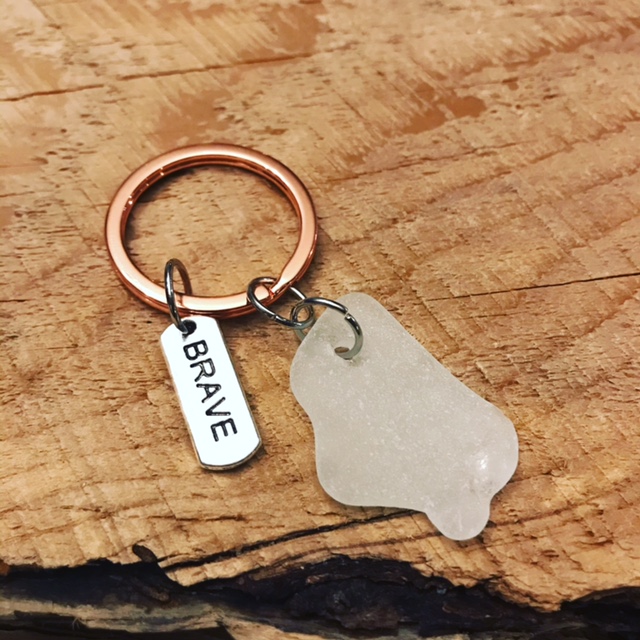 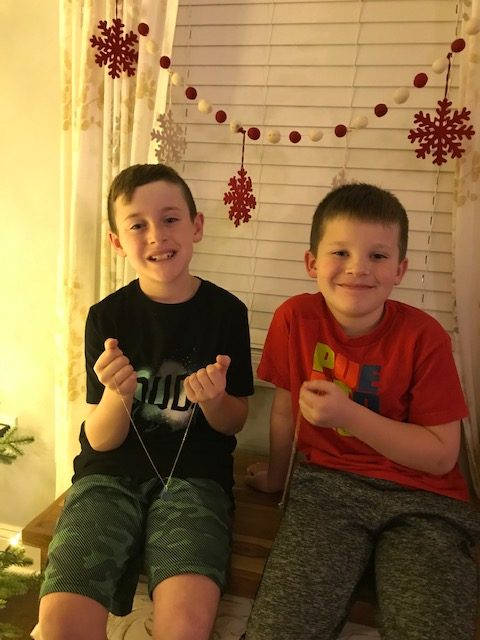 After months in lockdown, Brayden and Bennett Astorino created inspirational keychains with a touch of the beach to lift people’s spirits.

“Happy messages,” Brayden, 11, says. “Messages that would make your day.”

Their grandparents have a house in Lavalette, according to Christina Astorino, the boy’s mother.

“So they’ve been collecting sea glass for years,” she says.

The brothers placed 10 of their handmade sea glass keychains in random locations downtown for people to find and enjoy.

“In places where people could really notice them; like railing bars, we hung them in trees, we put ‘em on benches — there’s this park where Mary has her hands out and we put them in her hand,” Brayden says.

According to Christina, the boys were first prompted to do their part when Riverview Elementary School was named a National Blue Ribbon School of Character.

“They had come up in the spring with this empathy project,” she says. “Certain kids made cards and certain kids made posters, they did sidewalk drawings all throughout their neighborhood.”

The Black Lives Matter march was also taking place during this time period.

“We wanted people to be able to find things while they were marching that would make them happy,” says Christina.

One of the keychains made it across the river to the Big Apple.

“And it was a New York business, they donated in our name to one of our fundraisers,” the mom of three says.

In turn Brayden and Bennett, 8, picked two organizations that they wanted to donate money to for their sales, according to Christina.

The brothers have an altruistic spirit — picking keychain charms with positive, hopeful messages like: ‘inspire,’ ‘enough’ and ‘brave.’

Brayden’s dad is a contractor so Christina says during quarantine he supervised the 11-year-old with the power tools and taught him how to drill his own sea glass.

“It started out with me threading the wiring all around the sea glass, then went to drilling at the top of the sea glass, we put a little hook, the necklace part through —  we would do a charm or like a little picture,” he says.

Before long, Brayden was really into it.

“My friend came over and I made a necklace and he asked to buy one,” the 11-year-old says. “I said $10 and he gave me $10. The next day my friend’s whole family came over and they bought two necklaces. I was really happy with what I had already made and I said to myself, ‘this could be a good business.’”

It all started when Brayden was just six or seven-years-old, he got a sea glass making kit and on a nice day set it up on a table outside.

So it was only fitting to name their jewelry business ‘Beach & Bay.’

“For Bennett and Brayden,” he says.

Brayden says the best part of this is seeing the look on recipient’s faces and the whole endeavor seemed really kind, so they kept it up.

That meant drilling plenty of sea glass to make more pieces for their trips down the shore.

“We would sell them up at the boardwalk, the gazebo,” he says. “As (people) are walking up to the beach — ‘cause we’re right nextdoor, they would buy them and it was really nice.”

The boys believe in making a difference.

And Christina couldn’t be prouder of her sons.

“It’s a sense not only of watching them accomplish something but pride,” she says. “The fact that they both were able to pick an organization they were even familiar with, that they knew would give back —- to their community or other kids who may not be in the same situation as them — and provide a little bit of excitement and hope during a time when things were really stressful and chaotic.”

She echoed Brayden’s sentiments of how cool it was to see the looks on people’s faces or in their (social media) posts when they found or purchased an item.

“From that we got some special order for kids who were dealing with different autoimmune issues or diseases,” says Christina. “We would make personalized messages for them on their keychains. To see everything come full circle is really awesome.”

She’s impressed with not only all the young entrepreneurship flourishing but the kindness and understanding.

“Their cousin (12) who also lives in town started a bracelet company at the same time,” the mom of three says. “It’s a thing that’s kind of gone through the family and it’s really good to see this generation of a bunch of little kids reining everyone in — down to age five.”

This has turned into Brayden’s passion project.

“We have a lot of sea glass so we’re gonna have to use it up and I think it’s a good way to use it,” he says.

They may even do another Holiday Hideaway, dropping a new batch of keychains in fun places around town — when people find them their inspiring message awaits.

“The fact that Brayden and Bennett were excited to give back is what makes me the most happy,” says Christina.

To see more, check out the brother’s Instagram handle at @2beachbay