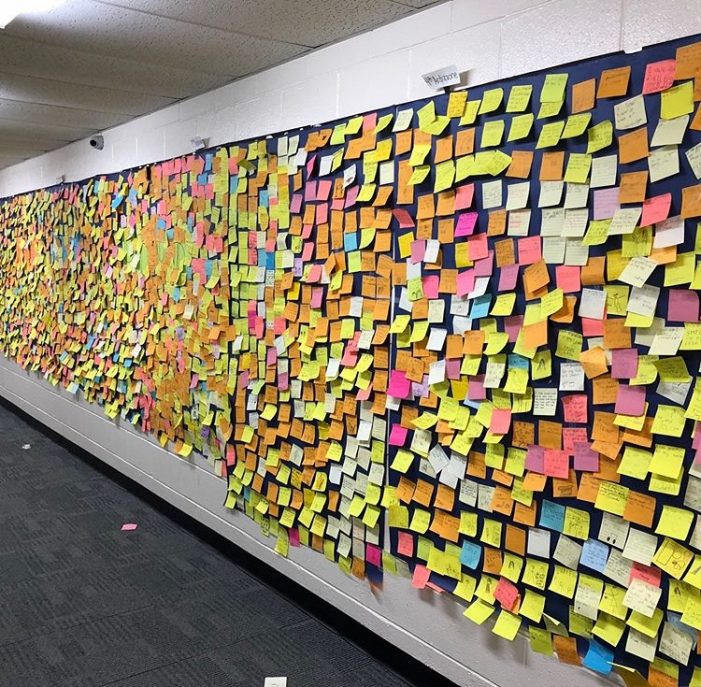 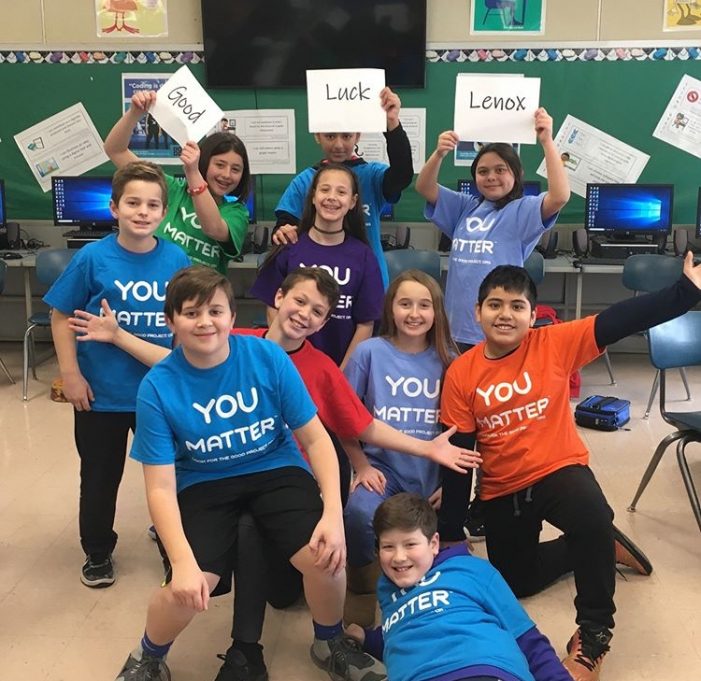 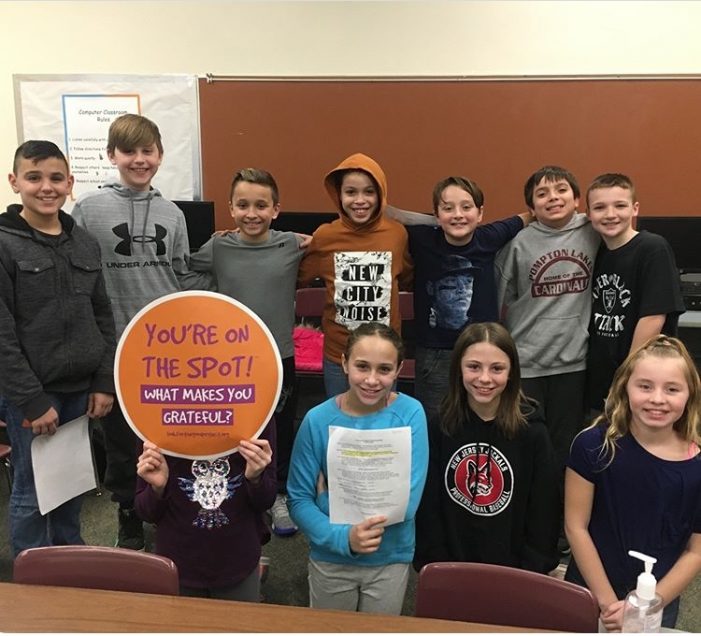 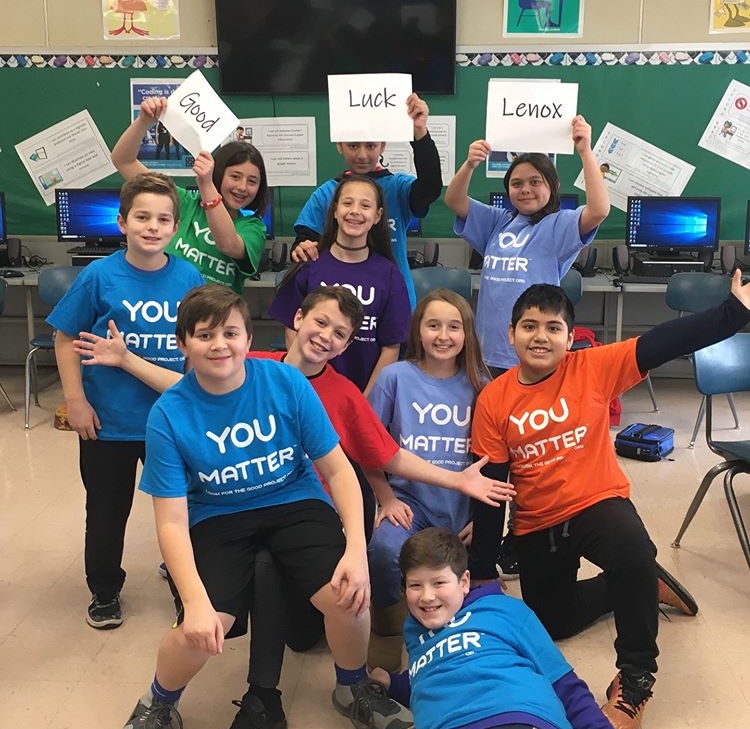 Students from both Lenox and Lincoln Elementary Schools took part in a “Look for the Good” Gratitude Campaign. As part of the campaign, the students constructed a “Gratitude Wall”.

Kate Vivino, Pompton Lakes Elementary Counselor, explains. “Every morning a member of the Flight Team would read a morning announcement about gratitude.  During that announcement, every student in the school received a sticky note, on which they had to write something or someone they were grateful for. The Flight Team would then collect the sticky notes and add them to the Gratitude Wall – featured on a main hallway in each school.  By the end of the program, we had over 6,000 sticky notes total on our Gratitude Walls.”

Vivino ran the 5th grade group called the Cardinal Flight Team (23 students total – some from each school), which promotes different positive character traits throughout the school year and runs activities in the school to promote these traits. Vivino had the Flight Team promote and run the gratitude campaign at each school, and they then ran an assembly to explain what the Gratitude Campaign was and why it was created. The Flight Team then helped run the activities that were completed during the two-week campaign.

“Look for the Good” was created social entrepreneur and author\illustrator, Anne Kubitsky.  “Anne had been emailing schools to promote the project and ended up in touch with us. After discussing the two-week gratitude campaign with the principals of Lenox and Lincoln Schools, we decided to move forward with running the campaign.” Vivino says.

As previously mentioned, an assembly was held during which the campaign was launched. The Flight Team at each 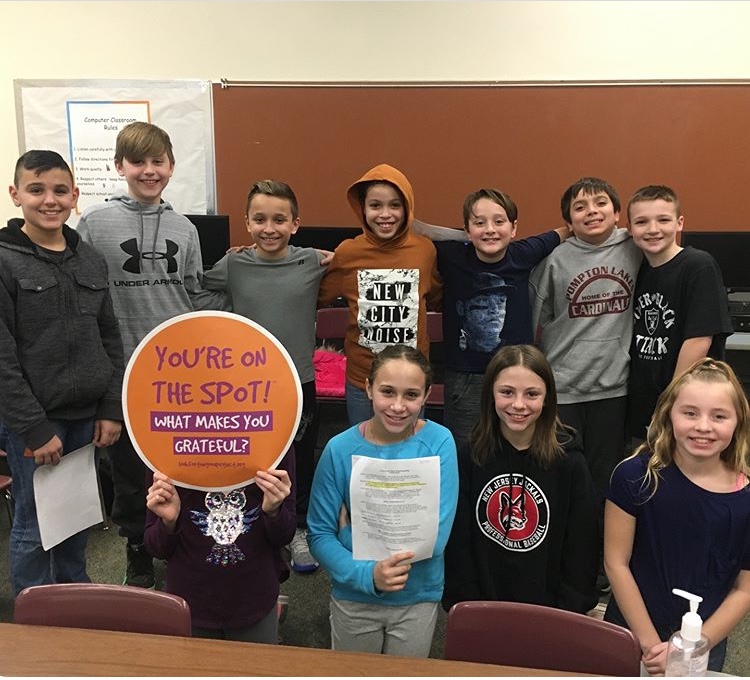 school rehearsed during recess for over a month, practicing their lines and working on their script.  At Lenox School, 5th grade teacher Melissa Huha helped run the assembly and prepare the Flight Team with Vivino. At Lincoln School, Dana Aagaard (District Technology Coordinator) and Caitlin Thomas (Math Specialist) helped to prepare the students along with Vivino.  During the assemblies, the students showed a video explaining why Anne Kubitsky created the program, explained the different components of the campaign, and read “gratitude letters” that they had written to various staff members and parents (who had come to watch them). “The staff members and parents were unaware that the letters were going to be read and were completely surprised when their students/children read the letters in from of the entire school,” adds Vivino. Also, “You Matter” cards were small orange cards that were given to staff members and Flight Team members to give out throughout the two-week campaign.  They were tasked with giving the cards to anyone they saw being kind, or to someone who mattered to them. The receiver of the card would then pass it on to someone else they thought deserved a card as well. Finally, every student was tasked to write a thank you (or “Gratitude”) letter to someone who has changed their lives. They were challenged with reading the letter out loud to the recipient by the end of the two-week program. “The students,” says Vivino, “were able to think about all of the things in their life they are grateful for. They were encouraged to consider a variety of different aspects of their lives including family, friends, food, hobbies, skills, pets, and academics.”

Vivino lauds “The Gratitude Campaign was a huge success at our elementary schools and staff members and students both expressed a desire to run the campaign again next year.  We invited administration from the other schools to our assemblies to inspire them into running similar programs.”