Presentations by The Historical Society of Florham Park 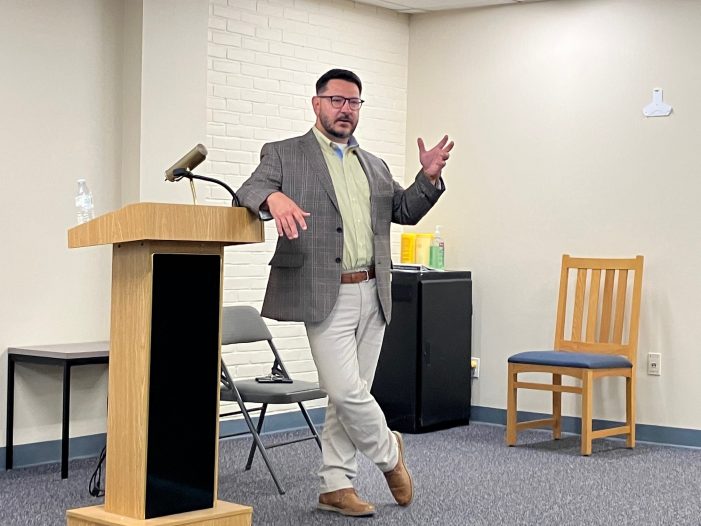 The Historical Society of Florham Park was happy to hold its first in-person presentation at the Florham Park Library since 2019.   On October 18, local Historian, Author, Teacher and Podcaster, Peter S. Zablocki shared a true story of The 1788 Morristown Ghost Hoax: The Search for Lost Revolutionary War Treasure.

It revealed how scams have been around at least since the 1700’s as many prominent Morristown families were duped.

The saga of the Morristown ghost has been told around campfires and dinner tables in Morris County for generations. Local legend claimed British Loyalists had secretly buried stolen Patriot treasure on Schooley Mountain as they fled the oncoming forces of George Washington during the Revolutionary War.

Years later in 1788, Ransford Rodgers, a former school teacher from Connecticut, convinced local prominent Morristown families that a ghost was protecting the true location of the treasure and he alone could exercise it. Little did the victims know, Rodgers was perpetuating an elaborate hoax and eventually extorted large sums of money from the embarrassed local elite. The tale has been recounted in various sensational pamphlets and publications ever since, leaving behind a mystery of what is true or myth.  What is known is that it was the wives who were most skeptical and led to his being caught.

Peter S. Zablocki, is the author of numerous books – the latest, Bullets that Changed America, from McFarland Publishing – and articles pertaining to local and national history. His work has been published in Weird NJ Magazine, Military History Quarterly, Military History Magazine, and Honest History Magazine, among others.  His paperback books can be purchased at Amazon.com, and at the Barnes & Noble bookstore on Route 10 in Morris Plains.  Peter also shared some of his other books such as “Terror Over Elizabeth New Jersey” which recounted the 3 airlines that crashed in the town within a few months of each other and “The Denville Thirteen” about the trial of 13 accused of murder.

Zablocki is the Vice-President of the Denville Historical Society, Museum, and Research Center in New Jersey, as well as one of the town historians.  Learn more about Peter and his books at https://www.peterzablocki.com/

All aboard for the next free presentation scheduled to arrive on Wednesday, November 16.  Departure is at 7:00pm for:

The Historical Society of Florham Park is happy to announce it will host this ride through history while you are seated at the Akhoury Room at the Florham Park Library.  Our Conductor (presenter) will be Mike Dodge, volunteer of the Whippany Railroad and a life-long resident of Morris County.  Mike has been actively involved with the all-volunteer Whippany Railway Museum for over 15 years.

The Whippany Railway Museum is nearby and has been bringing to life the history of New Jersey’s railroads to the public since 1965. However, the Museum’s age belies its heritage. The Museum was built upon over 30 years of preservation experience. In 1965, Whippany was home to the Morris County Central, a steam tourist railroad.

Today, the Whippany Railway Museum is firmly committed to its role of preserving the heritage of the railroads in New Jersey and the Morris County region. The Museum has made tremendous progress over the past few years in the acquisition and restoration of new equipment, thanks mainly to the donations and support of its visitors.  It has shown that it is indeed possible to have a quality local operation through much hard work and the tremendous positive support of the public.

Those who attended the “The Morristown Ghost Hoax” presentation enjoyed learning about a local “ghost” and local history.   Those who love trains will certainly enjoy Mike Dodge’s presentation about preserving NJ railroad History.

Everyone can also pencil in future presentations by The Historical Society of Florham Park which are scheduled for next year when we welcome “The Real Housewives of New Jersey” on March 14 to learn about early American women and then have a return visit on April 11 from popular presenter Joel Farkas on his “George Washington and Morristown New Jersey, Perfect Together”.

The Historical Society of Florham Park was founded in the 1930s to save and preserve the Little Red Schoolhouse.  The former schoolhouse on the corner of Columbia Turnpike and Ridgedale Avenue was converted into a museum and is the borough’s icon, appearing on the town flag, letterhead, website, and public works and first responder vehicles. the symbol of Florham Park.  To learn more about it, check https://en.wikipedia.org/wiki/Little_Red_Schoolhouse_(Florham_Park,_New_Jersey) or to learn more about The Historical Society of Florham Park contact Richard Davidson at RDavidsonFP@gmail.com.

Caption: Peter Zablocki speaks to the crowd about his book at the Florham Park Historical Society presentation (credit: Peter Nicolas)