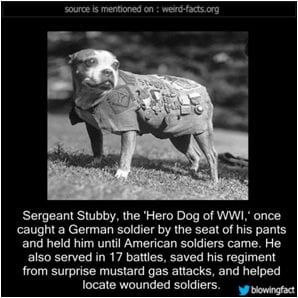 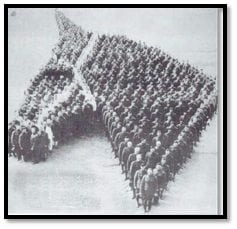 There is no doubt the words “service dog” sound familiar

when
referring to beloved canines that stood and walked side-by-side with
soldiers during recent wars. However, animals of various types were at the ready to aid United States soldiers during World War I as well.
Joan Schaibel, who worked for 17 years as a historical program
specialist Fosterfields Living Historical Farm in Morris Township, was scheduled to present “Amazing Animal Heroes of World War I” at Whippanong Library on Thursday, June 14, at 7 p.m.
Schaibel, a former Boonton High School History, Reading and English teacher who has researched and planned history programs as well as given farm and historic house tours, recognizes the need and
significance of the presentation.
She says, “2017-2018 are anniversary years for United States
involvement in World War I-now an almost forgotten war in American history. Animals are one way to bring the story of “The War to End All Wars” to life! While at Fosterfields, I was able to connect animal participation in World War I to some of the resident animals there and to develop an Armistice program, as well as presentations for high school classes. Most people like and relate to animals, and these feathered and furry creatures (and insects!) are the unsung heroes for what they were able to accomplish 100 years ago during wartime conditions.”
“Amazing Animal Heroes of World War I” included a Power Point
presentation along with &quot;props&quot; to engage the audience in the story. “I have not documented the length of time taken to prepare the program, but the info from online research, local history, and books is ever evolving. The day before my last animal presentation, I learned about the Madison, New Jersey, connection to Rin Tin Tin!” Schaibel adds.

“As for Morris County, the Seeing Eye in Morris Township came about because dogs were trained in post-war Germany to aid troops blinded during World War I. Rin Tin Tin was found in a bombed German dog training area and became a movie star during the 1920s. Rin Tin Tin appeared at one of Geraldine Rockefeller Dodge&#39;s dog shows in Madison. The Morristown Battalion raised 400 sheep in order to sell wool needed for the war.”
Other types of animals highlighted during the presentation were
horses, pigeons, chickens, cats, camels, donkeys, mules, sheep, pigs,
canaries, a bear, white mice, slugs and glow worms.
Schaibel, who also offers programs titled “The Schoolmarm (education in a late 19th century one-room schoolhouse),” “Lesser-Known First Ladies of the U.S.,” and “Death and Mourning Victorian Style,” reflects on her reason for doing so. “I love history and sharing it with audiences of all ages! While no longer teaching in a school classroom, the community offers opportunities to bring America’s past to the forefront.”