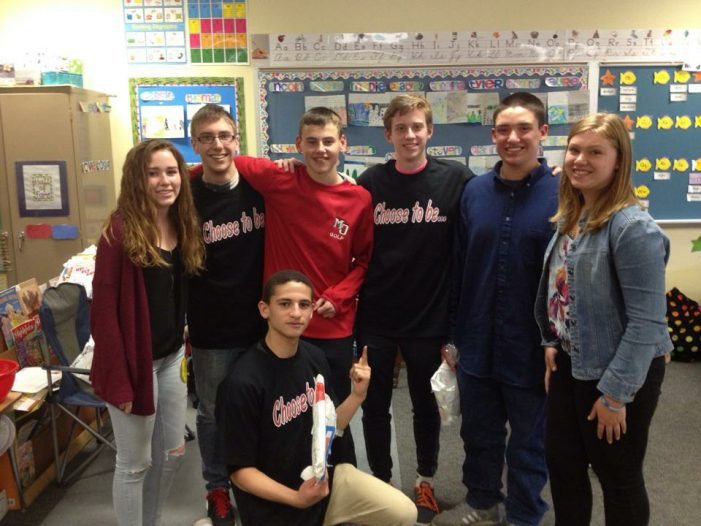 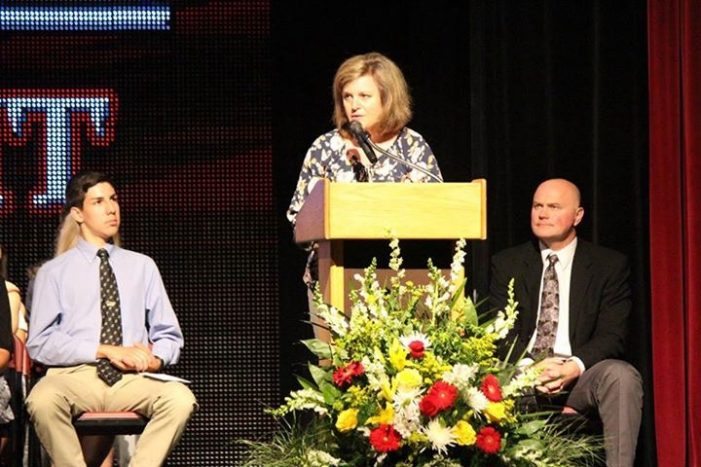 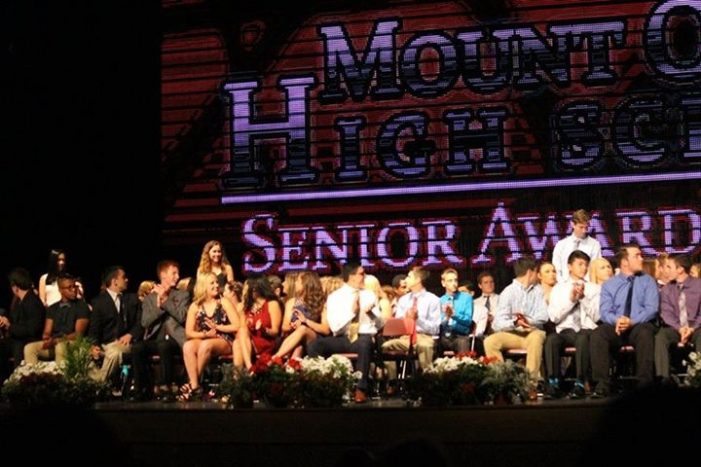 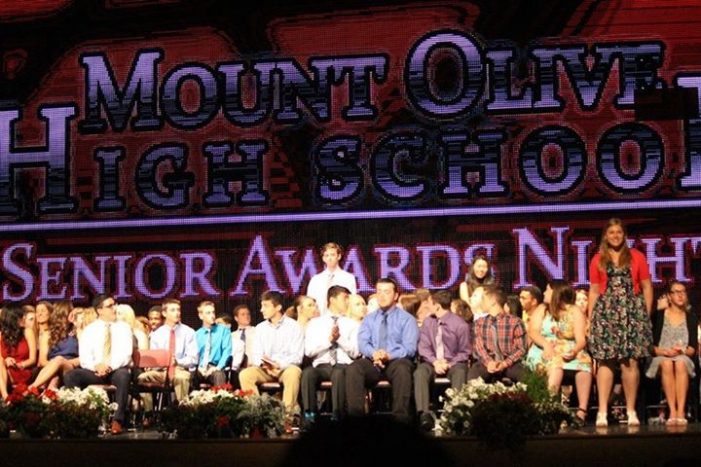 Their years at Mt. Olive Schools have come to an end as recent high school graduates, but like a rainbow that reappears and stretches across the sky, these students can now take their lessons of kindness and sprinkle them wherever they go.

To celebrate all they have accomplished and the concept of Rainbow Connections that was born by these 22 students 12 years ago, Ann Scotland, second grade teacher at Chester M. Stephens Elementary School in Budd Lake, recently presented two scholarships at the Senior Awards Night held Tues., June 7, at MOHS.

Gargi Panigrahi and Victoria Andrews each received $625 and a copy of  “Treasures of a Teachers Heart~ Learning to Change the World with Our Own Two Hands,” the book co-written in 2004-2005 by Scotland’s first and second grade looping class. These 22 students were among those who just graduated MOHS, Fri., June 17.

“This was the final chapter that we could share in together,” says Scotland. “We wrote our book to offer a voice to the importance of kindness “Rainbow Connections” and the difference it can make. Since our time together Rainbow Connections have blossomed into a school wide lesson and the CMS family has embraced the magic behind it with a variety of practices.

“I don’t think my high school coauthors have a true understanding of the legacy they have left behind from their younger years,” she continues. “They left an imprint that has grown in a beautiful way with time. The applications alone were a testament to the value of our simple term “Rainbow Connections” and its meaning we provided. What a perfect way to celebrate this milestone year as they move forward into the next chapter of life. Providing a scholarship from the proceeds of our book offered support to a peer(s) in the name of humanity.  It’s a perfect ending. Now it is time for each individual to create their own story with goodness at its core.”

The scholarship was offered to a graduating MOHS senior that was an alumni of CMS, explains Scotland. Nominees had to simply write, in 500 words or less, the impact Rainbow Connections had on them since leaving the school and how they continued on with the mission of kindness over the past several years.

Of the Rainbow Connection Committee, 15 members reviewed the 17 applications that were submitted and narrow that down to five.

“We then gave the five chosen finalist to Lisa Smith Wagner (a mentor for our book) and she picked the two winning applications,” says Scotland. The choice was not easy.

“All of the applications had inspiring moments to share,” says Scotland. “I can tell you that there is great character among the graduating class of 2016! Picking the top five was difficult to do… Lisa Smith Wagner also had a tough time. She stated that she read each entry several times before making her final choice. The same two kept coming back to her.”

Gargi Panigrahi shared a “rainbow connection” that went all the way to India, says Scotland.  “She visited a poor village there with her grandpa’s Rotary Club. Gargi took it upon herself to purchase and deliver fresh supplies to a school in need there. She stated in her writing “Poverty shouldn’t stop them from being who they want to be and doing what they want to do.” Since coming home she volunteers at Hackettstown Hospital, public library and works at a food pantry once per month.”

The next recipient, Victoria Andrews was a leader in the Best Buddy Organization at the MOHS, a role she took on all four years there.

“Her mission was to help other students absorb the truths regarding peers that are intellectually and developmentally disabled,” explains Scotland. “She felt that knowledge offers understanding and with that clarity came acceptance as well as appreciation. This year the organization hit a milestone by having mainstream students outnumber the students with special needs. Her reality “We all need a little kindness and respect no matter what our background might be. In truth, we are not that different after all.”

Scotland says, “I applaud all of the applicants and the difference they are making out in the world. It was an honor to recognize two of them with this scholarship.”

Since the scholarship was granted out of proceeds from Scotland and her co-authors book, she says this will most likely be a one-time scholarship unless there is an increase in book sales.

Published in 2007 by iUniverse, more than 1,000 copies have been sold locally, Florida, Virginia, Colorado, New York, New Hampshire and even Haiti and Japan, notes Scotland. It is available online through sites such as Barnes & Noble and Amazon.

Scotland was grateful and honored to be able to pass on an act of kindness from proceeds generated from her book.

“I feel honored to have had the opportunity to take part in such a special evening and grateful for the people whom I was able to share in it with,” says Scotland who presented the scholarships at the awards’ night. “As a second grade teacher in the district you don’t always get to see the accomplishments of past students before moving on to their young adult lives.  It was confirming and rewarding to know that our students move forward with such promise.”

Scotland is so very proud of her former students and thanks them for their contribution in rainbow connections.

“I am excited for them!” she says. “I know that they are all going to follow their dreams with heart! I am looking forward to seeing and hearing about all of their accomplishments.  I am a fan of each one.

“Thank you for a very special time in my career,” she adds. “You added purpose to each one of my lessons.  Teaching changed for me after I met all of you…in a very good way.  Now go out into the world and be you! Find your clarity and stand by it. Don’t forget to sprinkle all that you do with kindness.  We all know it matters! I’m rooting for you.”

Although her students are moving on, Scotland will hold true to her mission.

“My plans are to keep it a part of my daily lesson plans and my life in general,” she says. “One day at a time, one act of kindness at a time.”

The idea of rainbow connections was recently spread to a Randolph elementary school by a former CMS teacher who decided to share the CMS tradition.

Former CMS teacher Brittany Dungan brought the idea to her colleagues at Center Grove Elementary School this past April when second graders ventured off on a kindness tour similar to the annual CMS tour.

Scotland is proud that kindness is now spreading to other school districts.

“It will be a gift to that school and community of Randolph,” says Scotland. “It would be awesome if more schools got involved. I was excited to hear that she took this on. We hosted a visit with the second graders from Randolph just yesterday. They came and had lunch with us. We watched videos of our tours. The kids had a great conversation about the experience. They also made a new friend in the process. Not to mention they got to see Ms. Dungan ~ a teacher they miss and loved.”

Scotland concludes, “Congratulations to the class of 2016! Now go out into the world and do your thing… whatever that might be~ with kindness! I’m so proud of you all.”