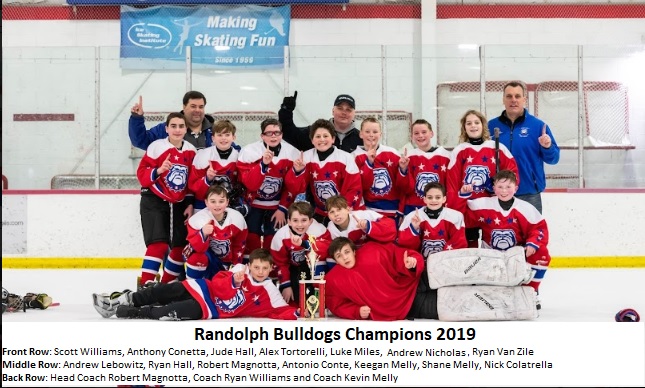 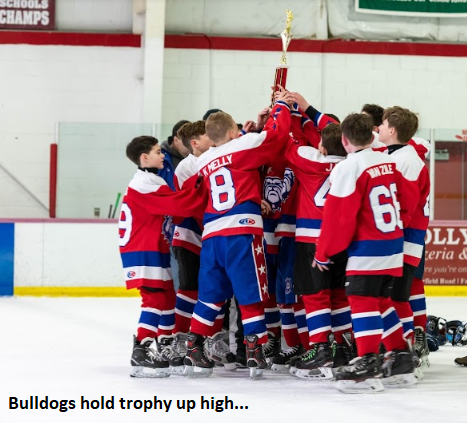 The team was only able to play in the championship game because of a dramatic win over Pascack Valley in an epic semi-final on Saturday March 10th at Floyd Hall. The Bulldogs were down by a goal, 3 to 2, with just 14 seconds left in the game when, with the Bulldogs’ goalie pulled, Defenseman Keegan Melly retrieved the puck in the Bulldogs left corner and hit center Shane Melly with a pass off the boards in the neutral zone. Shane was able to outrace the two Pascack Valley defenders to the goal, faked out the goalie and went back hand into the net with just two seconds left in regulation time.

In a four-on-four overtime, both teams traded scoring chances that ended with Shane Melly bringing the puck up the ice in a 2 on 1 with teammate forward Scott Williams. Shane hit Scott with a saucer crossing pass over the defenseman’s stick and in front of the Pascack Valley net and Scott shot the puck over the goalie’s blocker, but it hit the top part of his stick and went over the goal as the OT buzzer sounded.

With overtime over, the two teams went into a 3-player shootout. The Bulldogs, being the home team, chose to shoot first and Shane Melly put the first shot into the net. Then Pascack Valley shooter scored as well. Both teams’ second shooter missed which left the game hinging on each team’s 3rd shooter. Keegan Melly shot next for the Bulldogs and showed the goalie a forehand shot before bringing the puck to his backhand and went top-shelf on the goalie in the right corner. With dozens of spectators watching behind the goalie, Pascack Valley’s Tyler Rothstein approached the goalie from a sharp right angle but shot the puck into the middle of the goalie’s chest securing the Bulldogs’ victory.

On March 10th, the Bulldogs were able to beat the Paramus Spartans in a defensive championship game that was tied zero-to-zero when, with 7:10 left in regulation, Defenseman Robert Magnotta was able to catch a break-away speedy opponent from the other side by diving and tipping the puck into the corner without tripping the player. With 3:43 left in the 3rd period Shane Melly made a behind the back pass to Bulldogs’ Nicholas Colatrella who shot the puck through the goalie’s five-hole, giving the Bulldogs a 1-0 lead. After the goal, the team implemented Head Coach Robert Magnotta’s expert strategy of defensive hockey and not allowing the Spartans any opportunities to set up in the Bulldogs’ zone. The game ended with the Bulldogs keeping the puck in the Spartans zone as the clocked clicked zero….then the championship celebrations began.

The Bulldogs are 11-year old’s with 5th and 6th graders playing against opponents that mostly consisted of 7th and 8th graders and some teams having high school freshmen since the rosters are organized based on birth year. The undersized Bulldogs showed tenacity but played with old-fashioned sportsmanship while one of the Bulldogs’ puerile opponents referred to them as “unsavory rascals” which then became a badge of honor for the team.

The regular and postseason saw the Bulldogs improve as hockey players as Bulldogs Head Coach Robert Magnotta helped the players improve by, what is a consistent characteristic of his teams, being more disciplined, better positioned and an unselfish team. Coach Magnotta has become a USA Hockey Level 5 certified coach this year and as such he was asked to develop practice drills and other coaching materials for USA Hockey to publish and use to help all coaches around the country.

As is routine for a Magnotta coached team, every player participated in the scoring this season. One axiom of the Bulldogs is that all players play offense and all players play defense. The team’s performance and statistics show this to be the case.

The team played ever increasing disciplined positional hockey. The Bulldogs’ players learned the benefits of positional hockey and always unselfishly looked to make a pass to their open teammates.

Shane Melly led the league in both goals and total points and in doing so broke two middle school league single season records with 40 goals and 54 points during the season. His assist tally was third best in the league.

Keegan Melly led the league in assists with 17. Both Shane’s and Keegan’s league leading stats were followed by AAA Bantam (U14) NJ Avalanche and NJ Devils players. As both boys are still in elementary school (Ironia Elementary School), they will be playing in the middle school league for many years to come.

Forward Andrew Lebowitz took his game to a whole new level which resulted in a breakaway goal he scored with the opponents chasing him but unable to catch him before he snapped a goal in the top left corner against Montclair.

Robert Magnotta Jr. consistent defensive play was the bedrock to all the team’s success. Robert is such a critical player to the Bulldogs that he consistently leads the team in Time-On-Ice (TOI) at 29.56 minutes average per game. As the Bulldogs opponents even admitted, he is the most reliable defenseman in the entire middle school league.

Alexander Tortorelli, one of the Bulldogs’ newer skaters, improved significantly. He participated in scoring with goals and assists because he learned where to play as a positional hockey player and he bought into the Bulldogs hockey philosophy taught to him by Coach Magnotta.

The team’s performance this year resulted in the team being invited to participate in the “Middle School Showcase Tournament” of the best New Jersey middle school teams. However, given the team’s busy schedule, the Bulldogs are unable to attend.