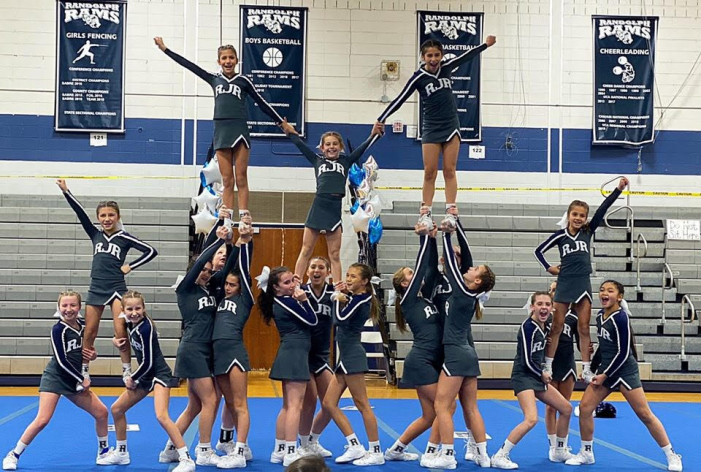 Making Randolph proud and celebrating girl power, the 19 members of the Randolph Cheerleaders Junior Rams headed to the National Competition Championships in Orlando Florida on the weekend of February 8th.

Founded by Randolph High School’s Cheerleading Booster Club members Cheryl Freund, Evelyn Brockman, and Sharon Ruiz, the squad is made up of students expanding from grades four through nine. Fueled by teamwork, unity, and hard work, these girls begin cheerleading during August’s summer heat, with practices three or more days or nights per week. In competing three to four times per month (in which they have won 1st place several times), these girls demonstrate diligence, prowess, and athleticism on a regular basis.

Remarkable that the Junior Rams are only in their second season.

“Making it to the National Level is the goal of most competition cheerleading teams,” Head Coach, Dana DellaValle points out. “The National High School Cheerleading Championship​ (​NHSCC) is the most prestigious cheerleading championships across the country. Several performance arenas are set up at ESPN Wide World Of Sports where teams compete in semi-finals. The teams that score the highest will make it to the final round. They work extremely hard to improve each week to the next with the goal of earning a bid (invitation) to the Universal Cheerleading Association’s NHSCC.”

Thousands of athletes and spectators from hundreds of schools from across the country attend this event, and DellaValle has reason to be proud. As someone who has been involved with competitive cheerleading most of her life, and has a lifelong love of the sport, she has been coaching the Randolph Junior Rams since the teams’ inception.

Coaching along with ​​Assistant Coach Christina Dock, and volunteer Coach Giselle Ruiz, DellaValle shares that recently the team not only earned a bid to Nationals but also won 1st place in their division at UCA’s Kutztown Regional Competition. “Coach Dock and I are very passionate about competition cheerleading. We believe that much of what is learned through competition cheerleading can be applied to our athletes’ lives as they grow and mature, traits and characteristics such as patience, perseverance, dedication, and hard work. We are so proud of the girls and their hard work so far this season,” Dellavalle prides.

With an ever-changing choreographed routine and solid foundation of mastered skills, the Junior Rams are a mixture of artistry and athleticism, bringing it on. “Our competition cheerleading routine is 2.5 minutes of excitement, endurance, and high energy!” She promises. “We have skills such as standing tucks, double toe touch jumps, inverted stunts, spinning stunts, dance, cheer, and pyramid compacted into our 2.5-minute routine. It is exhilarating to watch and gets more exciting during every performance.”

For the members of the Junior Rams, cheerleading isn’t solely just about winning. It’s a success based on teamwork, about being inspired to be their best–even considering the age gap between athletes. Something that translates to much more than stunts or routines. She shares that the coaches even print out motivational quotes or team jokes on small sheets of paper in which the members of the team stick in their right shoes. “It serves as a small reminder to get motivated,” DellaValle says.​ ​“We are so proud of the unity and friendships our girls developed this season, they have turned into a little family of their own. There are so many things that inspire us about RJR. First and foremost, the respect and unity our girls have towards each other is so wonderful to see. When one of our athletes executes a new tumbling skill or if a stunt group hits a new skill, the rest of the team is just as happy as the athlete(s) who hit it. They encourage each other to be the best and try their hardest and that’s all we can ask for in a team,” she prides.

For DellaValle and the Randolph Junior Rams, the encouraging spirit of teamwork also extends to the other teams, not only just to their own. “It’s inspiring to see the love that not only RJR has for the sport but other teams as well,” she enthuses. “We are a competitive team, but we always wish our competitors good luck and cheer on their successes. The camaraderie that cheerleaders have is the absolute best.”