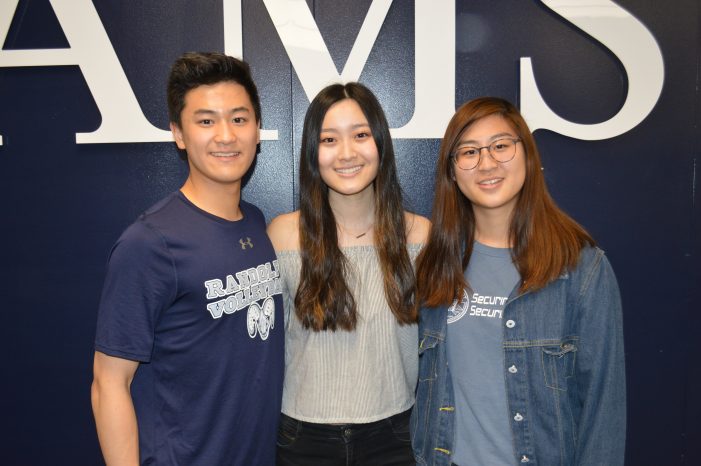 As June is in full swing, so are the celebrations for the class of 2019. Randolph High School is no exception and the top three students have much to be proud of. Julia Miao, Yuri Lin, and Jason Gu will soon walk across the stage at graduation with their classmates, holding the titles of valedictorian and salutatorians respectively.

For Miao, she’ll be heading off to University of Virginia to begin classes at the McIntire School of Commerce as an Echols Scholar. She is contemplating a minor in Biology or Chemistry.

A competitive dancer outside of her time at Randolph High, she also finds the time to volunteer as a member of the Randolph Rescue Squad. An avid traveler, Miao has been to over 20 countries to experience new cultures and understand different ways of life. She also has a passion for photography.

“I feel very humbled and grateful for the honor of Valedictorian. I know it wasn’t easy for all of us but I’m really glad that we got to this point and be successful.” Miao said.

This is the second year in a row that Randolph High School will have two co-salutatorians. Yuri Lin and Jason Gu have tied for second highest GPA in the class and will both speak at the June 19 ceremony.

Lin will be heading to UCLA in the fall to major in Microbiology, Immunology, and Molecular Genetics. She plans to minor in Music.

Her passion includes music as she has played violin for nine years. She even has a quartet group with her friends where they play at local senior homes and special events. She has been selected to region orchestra and all state orchestra for many years. She also enjoys figure skating and volleyball as hobbies.

“I think it’s really rewarding to feel that your hard work has paid off. It makes me really proud to see that I’m here after four years.” Lin said.

Gu will be heading to Washington and Lee University in Lexington, VA to double major in Economics and Math.

Gu is an all-around athlete. He was captain of the Randolph boy’s varsity swim team. He was also captain of the club volleyball team at the school. Besides sports, Gu is also a small business owner where he sells LEGO sets.

When it comes to academics and clubs, Gu is also no stranger to the honor societies. He is president of the Math National Honor Society, a former president of Math League, in charge of running the science fair this year. He is also first chair trumpet and a member of the Science Olympiad.

“I’m happy but I wasn’t really expecting to be here because school has always been hard for me. I’m happy and grateful to be a co-salutatorian.” Gu said.

Principal Debbie Iosso couldn’t be prouder of all of her graduating seniors, especially the top three.

“From the very first moment that we called them down to the office to tell them about their achievements, you could just sense the camaraderie among the three of them. It’s not often that we have co-salutatorians and a valedictorian. It was just an instant pleasure for each other, happy for each other, congratulating each other which is always such a fabulous feeling.”

The Randolph High School Class of 2019 will gather together for one final time on June 19 to celebrate their graduation.