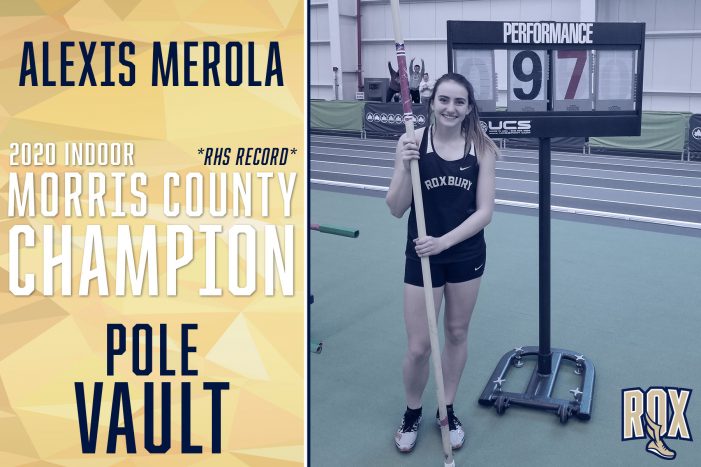 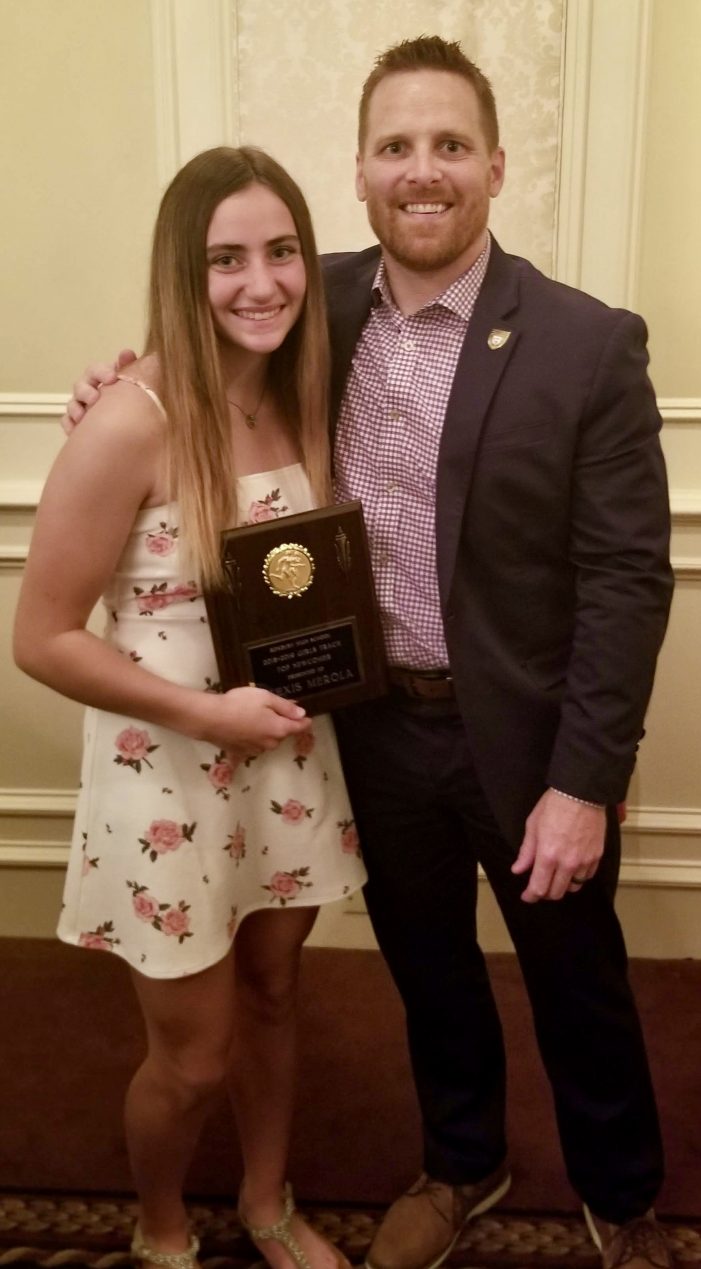 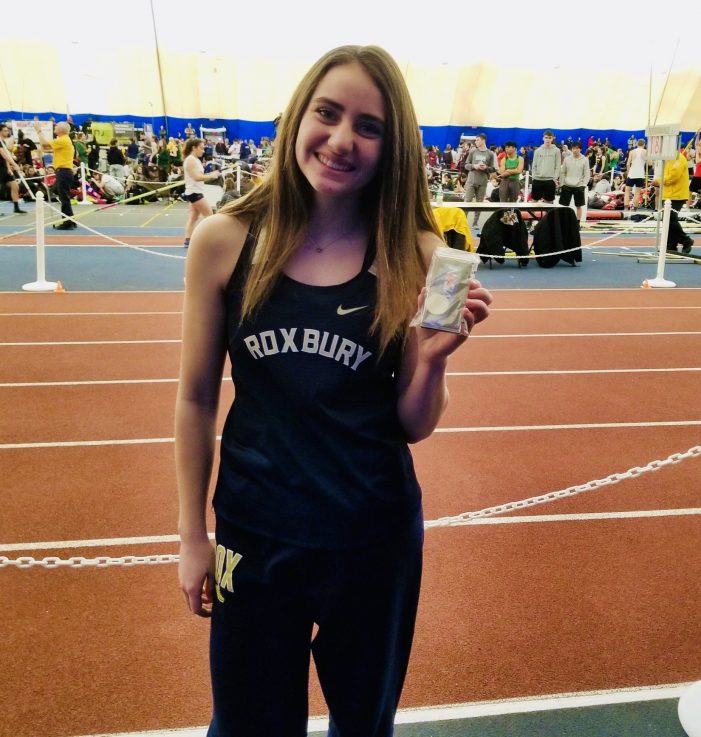 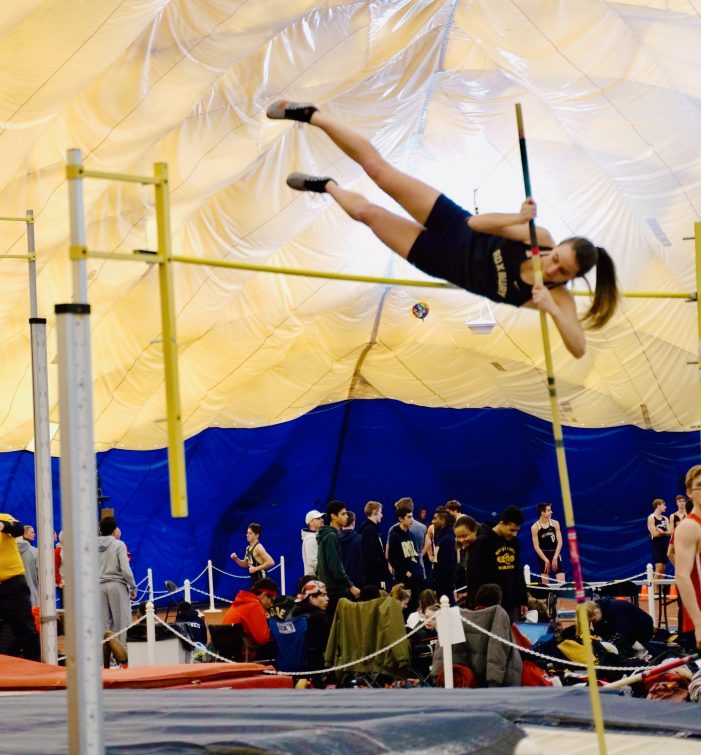 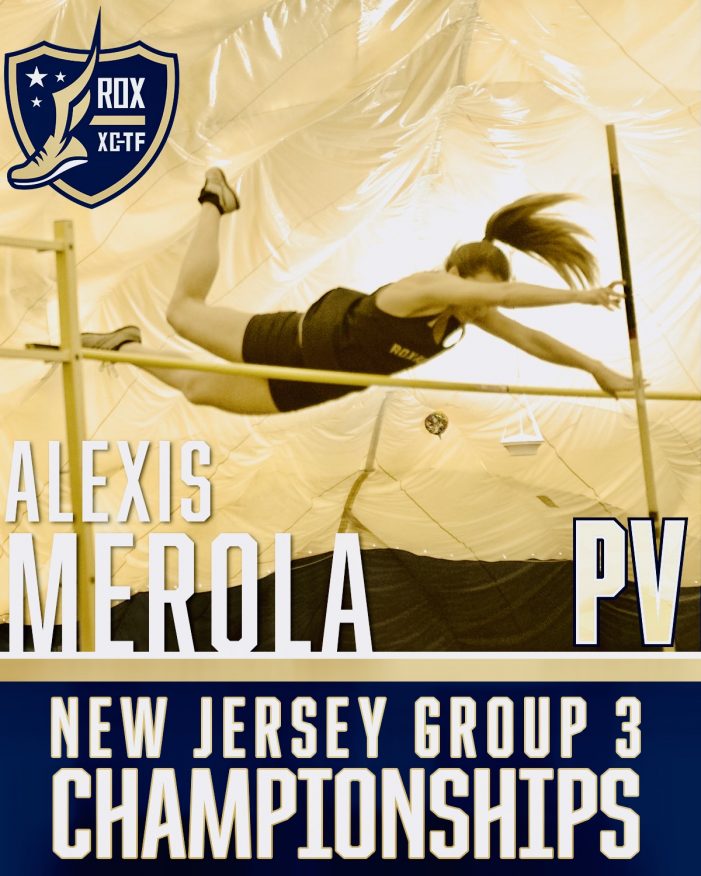 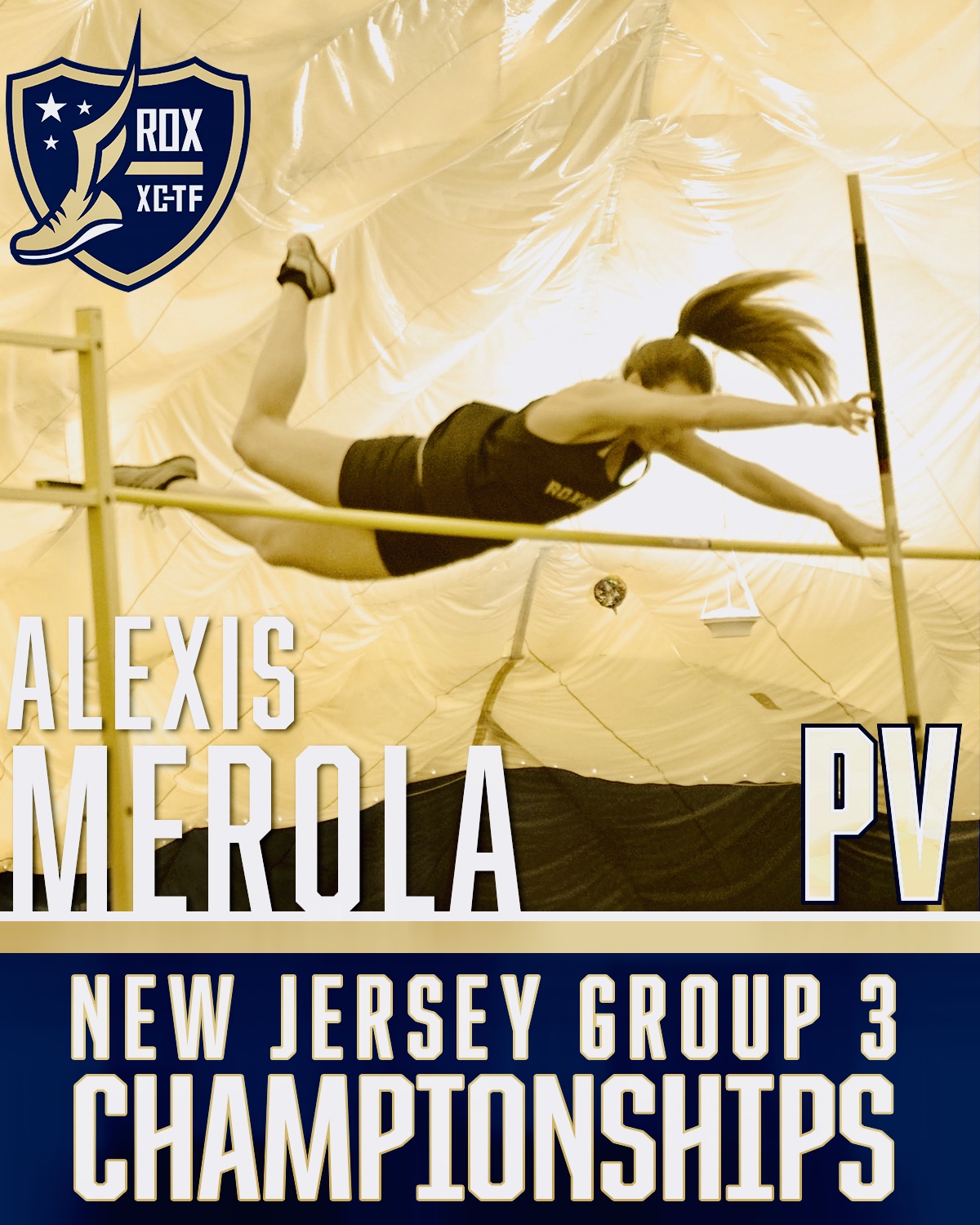 Alexis Merola was shooting for her eighth varsity letter this spring at Roxbury High when the team was sidelined by the coronavirus pandemic.

But not before the sophomore broke the winter pole vault record and was named 2020 Indoor Morris County Champion for pole vault.

“I just fell in love with the sport,” the track star says. “It was so much fun.”

And she has a fan in track and field head coach Derek Bischoff.

“I was beyond excited for Alexis when she won the County Championship,” Bischoff says. “She works really hard and deserved that win.”

According to her mom Maureen, Alexis was actually going for 16 varsity letters.

“I feel really bad with school now not having spring track, I don’t think she’s going to be able to do it,” says the national account manager. “And it was a goal.”

The multi-sport athlete was always eager to be involved in whatever was going on around her.

“Freshman year she was on football cheer and she got on varsity, then she did competition cheer, spring track and 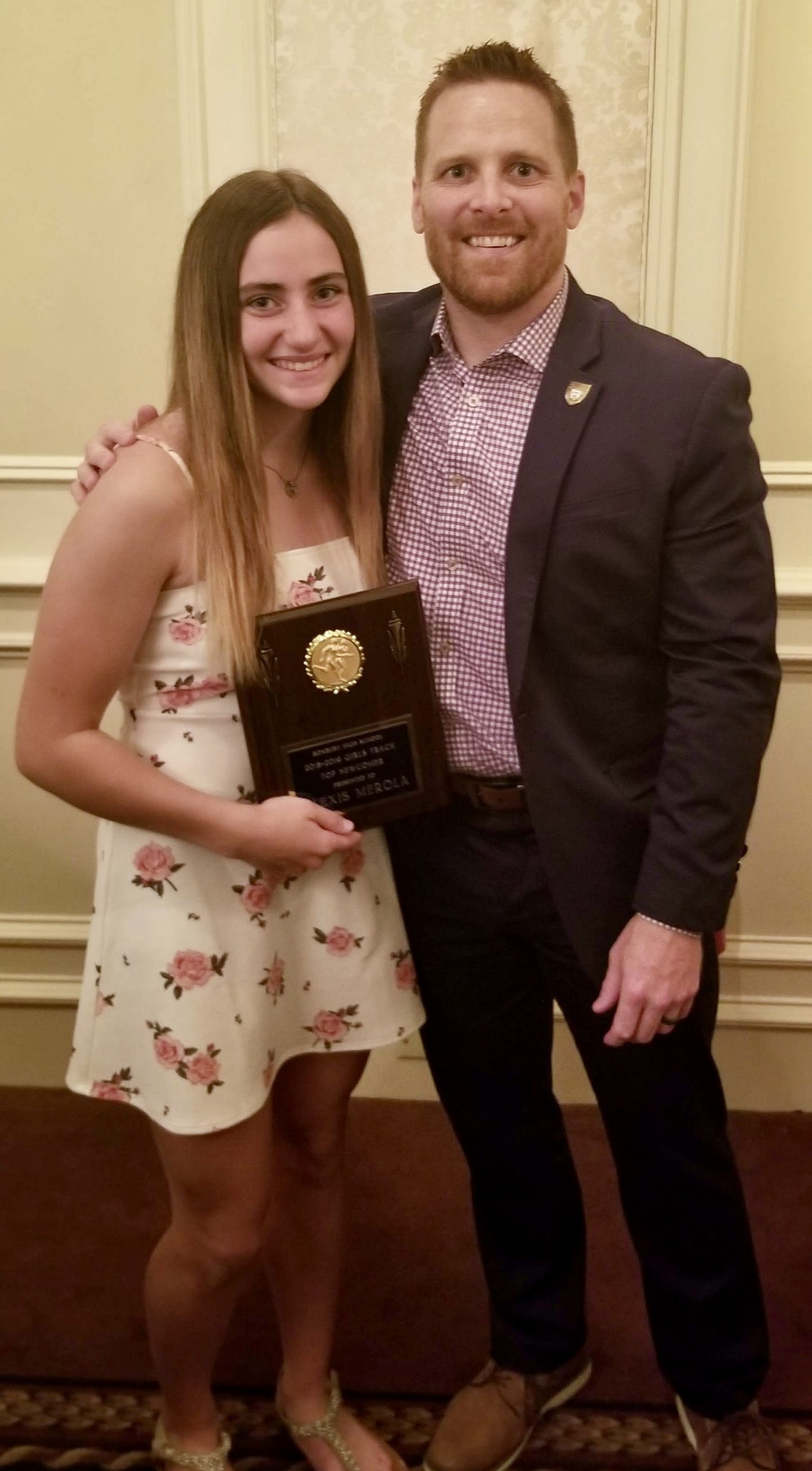 And Alexis gave up competition cheer and club gymnastics to focus solely on winter track.

“She got four varsity letters freshman year and this year was supposed to be four,” says Maureen.

It all started when she followed her older sister’s lead into track, and Alexis’ athleticism really began to show.

“When you’re a gymnast and a 15-hour a week workout kid you get super strong real fast,” Maureen says. “So she had the ability when she tried other things — and was naturally really good at it.”

Bischoff agrees there is a strength and body awareness inherent to being a gymnast that is difficult to replicate in other sports.

“There is also a bit of a fearlessness that comes with it too,” the coach says.

According to Alexis’ mom, training with Bischoff has been life-changing for the athlete.

“He has inspired her with his many words of wisdom and just who he is as a human being,” says the account manager.

Bischoff says that means the world to him. 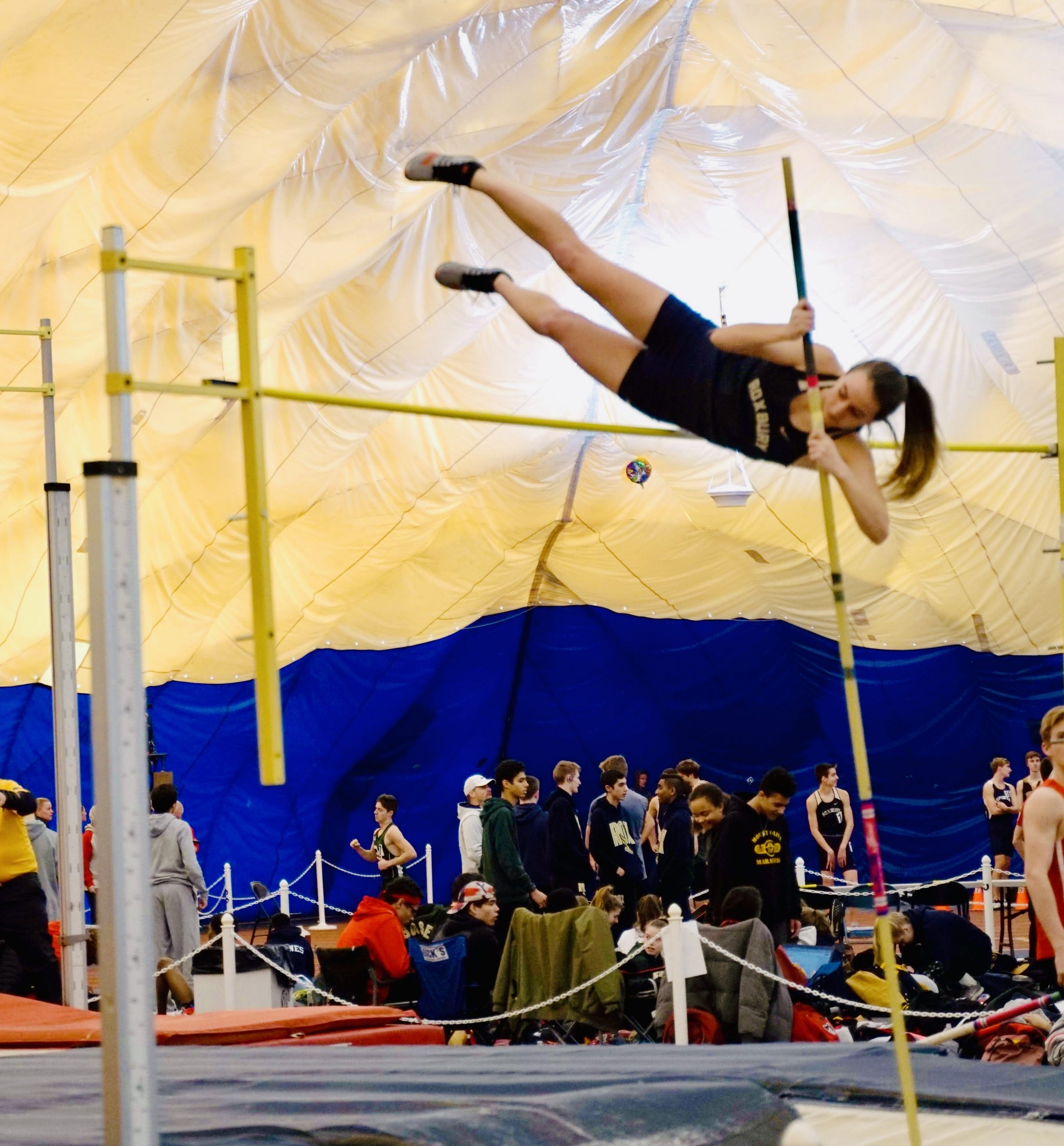 “A major focus for our program and our coaching staff has been to create a culture that athletes want to be a part of, can gain the skills to provide them with a winning mindset and ultimately give them the best experience,” he says.

“I think our team’s pretty close,” says the multi-sport athlete. “He has us warm up and cool down together, and every practice we’ll do a breakdown (where) we yell something on the count of three.”

The 16-year-old expects a lot of herself, according to Maureen. And she is crazy humble when it comes to her accomplishments.

“What stands out the most to me is her quiet confidence and her competitiveness,” her coach says. “Her teammates really respond and respect the way she works to improve each day. That was especially so this indoor season when we approached her about picking up the 55 meter hurdles — another event she will excel at.”

She’s currently not doing as many hours at the gym, instead putting those hours into club pole vaulting two days a week.

“You have to have an extreme amount of discipline and keep it going,” Maureen says, adding that she’s never been 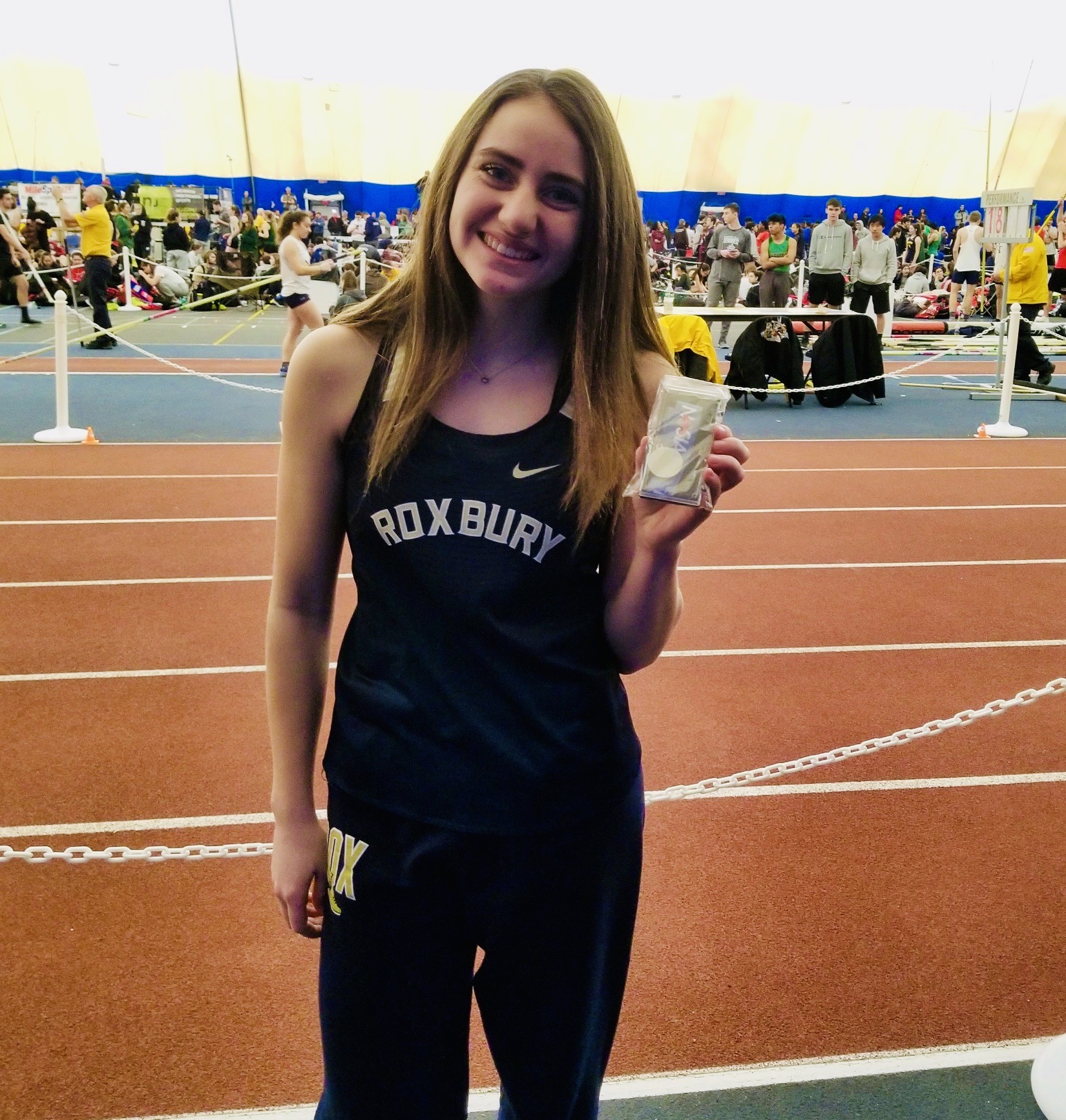 one to push Alexis to get a D1 athletic scholarship. “I think that’s actually too much pressure, because what happens if you get injured. And you’re really in college for your brains.”

The national account manager says she’s excited that her daughter is so incredibly focused.

“Watching her break that record and how hard she worked for it and how much it meant to her (was everything),” Maureen says. “Everybody complains about all the hours and the season is so long and the kids don’t get any time off — and she’s like, ‘I don’t mind ‘cause I really like it.”

The high school sophomore has done gymnastics most of her life but in track she found her passion.

“You definitely need to train a lot,” Alexis says. “Know your corrections and just get to know what you’re doing — the feeling of it.”

So how does the track star do it all?

“In my house, school always came first but I’ve always loved sports,” she says, adding that she’s not yet sure how far she wants to take track. “I was thinking I could do it in college but I guess we’ll see where the next two years go.”

That season never was — with the COVID-19 pandemic first closing New Jersey schools on March 18, and then on May 4 Governor Murphy ordered the shutter of all schools for the rest of the 2019-2020 academic year.

On June 26 the governor declared a part-time return to classrooms for students this September.

While it will be a bittersweet return, everyone is rooting for Alexis to soar past those double digits the very next time she has the chance.