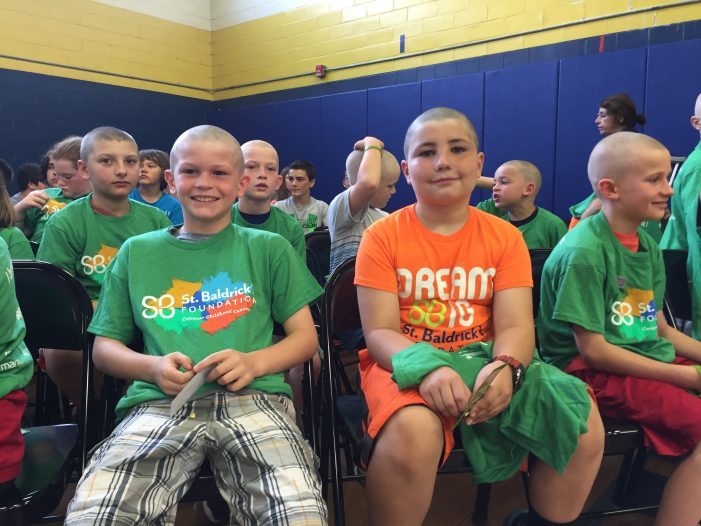 “Jim and I both had our heads shaved at the Roxbury Fire Co. 1 St. Baldrick’s event back in 2009,” according to Deery. “It was such a rewarding experience, and we thought it was something we could do to get the students involved in at school.”

Over the past six years, students and staff at the two schools have raised almost $200,000 by having their heads shaved to raise awareness and money for the St. Baldrick’s Foundation, a non-profit group that raises money for research and to help families whose children are fighting cancer. By shaving their hands, fellow students and staff show solidarity in the fight against kids’ cancer. This year’s event will net likely another $20,000.

This year, two of the barbers, Kevin Culleny and Janet Stone, were “knighted” and joined the ranks of the other Knights of the Bald Table as part of St. Baldrick’s League of Legendary Heroes. Knights are made up of volunteers who’ve worked in some capacity for the foundation for seven or more years.

These barbers received this honor by Susan Heard, a speaker on behalf of St. Baldrick’s who shared her personal story of her son, David, who fought and lost his fight to cancer when he was in fifth grade. Heard and her family found out about St. Baldrick’s during this fight and one year at an event, David announced that his mother would be shaving her head. Since then and since David’s passing, she has continued to shave her head as requested by David to carry on the tradition. To date she has shaved her head 14 times.

McDermott announced at the event, that the Lincoln/Roosevelt staff took up a collection and donated it to the foundation in honor of Kathleen and George Goodwin’s grandson, Matthew, who is now in remission. Kathleen Goodwin is a speech teacher at the school and her husband is a substitute teacher with the district.

This event is no longer just for boys according to Deery, “I think it was three years ago we wanted to find a way for girls to participate, so we looked into Locks for Love and Pantene Beautiful Lengths. We went with Pantene.”

This year more than a dozen girls between the two schools had eight or more inches of hair cut off and donated to Pantene Beautiful Lengths. This donated hair will be used to make wigs for cancer patients who’ve lost their hair.

“For the girls at Franklin, there is a salon in Flanders on Route 2016, Alfonso’s, the owner has been fantastic. He brings in pizza for all the girls that go there as a group to get their hair cut for Pantene,” said Deery.