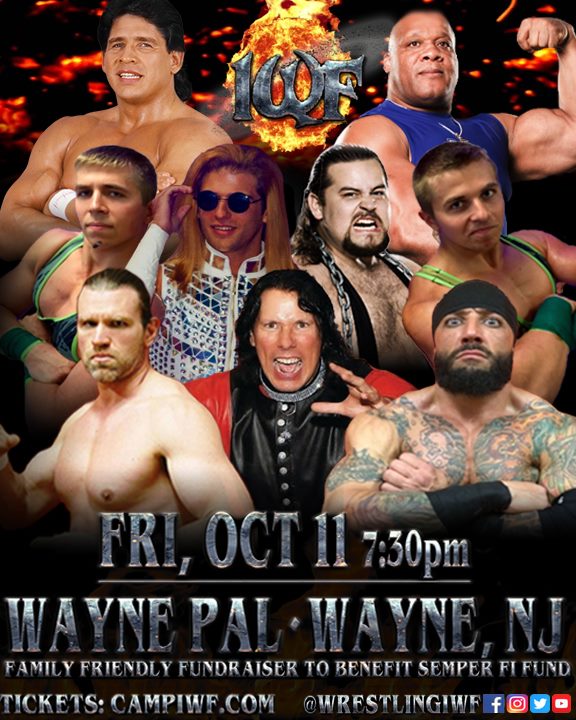 When it comes to lending a helping hand to the less fortunate, professional wrestlers Tito Santana, a Roxbury resident, and Kevin Knight always like to do what they can to help a worthy cause.

On Friday, October 11, at 7:30 p.m., the Independent Wrestling Federation (IWF) will hold a special wrestling card in Nutley, called FIREPOWER, to raise funds for the Semper Fi Fund. The Semper Fi Fund is a non-profit 501c organization that provides a variety of programs to assist wounded veterans in all branches of the United States Armed Forces.

Santana, whose real name is Merced Solis, will wrestle on the card. Solis, 66, is an accomplished grappler, wrestling with the World Wrestling Federation from 1979 to 1993. He twice held the WWF Intercontinental Heavyweight Championship and was a two-time WWF Tag Team Title holder.

He also won the 1989 prestigious King of the Ring tournament, and WWE inducted Santana into its Hall of Fame in 2004, honoring his storied career in the squared circle.

A group of military spouses laid the groundwork for Semper Fi in 2003 after seeing firsthand the dire circumstances returning wounded marines and sailors faced. Thus, they began to organize welcome home activities at the hospital and arranged travel for family members who couldn’t afford airfare, among other crucial services.

After 15 years, Semper Fi offers direct financial assistance and vital programing for combat wounded, critically ill and devastatingly injured service members of the U.S. Armed Forces and their families during hospital stays and throughout the recovery process.

Knight trains wrestlers and runs IWF, which has put on several live pro wrestling events in the Northeast to benefit countless charitable efforts across the years.

“Over the past 22 years, IWF has produced hundreds of live event fundraisers for a variety of charities and civic organizations throughout New Jersey, New York and Pennsylvania, including American Cancer Society, St. Jude Children’s Research Hospital, Tomorrows Children’s Fund, Twin Towers Orphan Fund and American Red Cross,” Knight said. “IWF’s FIREPOWER Live Event on October 11 may be our most meaningful event yet, as proceeds benefit Semper Fi Fund, which is one of America’s highest rated charities. It’s great to partner with such a wonderful organization that provides urgently needed resources and support for combat wounded, critically ill and catastrophically injured members of the U.S. Armed Forces and their families.”

For more information on the event, and to purchase tickets, log onto to www.CampIWF.com.