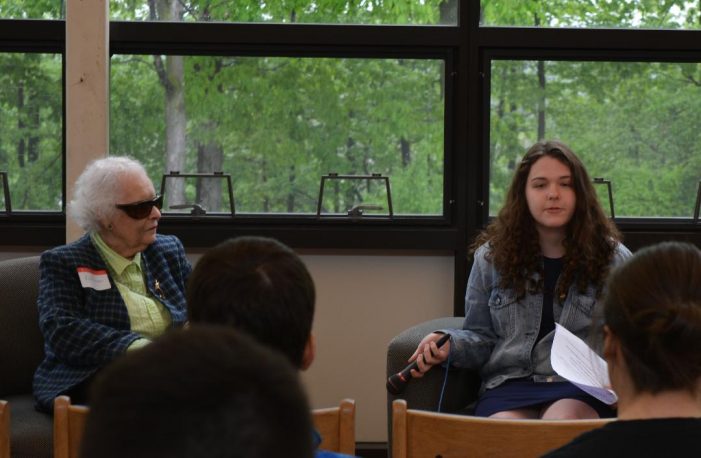 What began as a Bat Mitzvah project for then 12-year-old Evie Klein developed into a close relationship between Klein, now 17 and a West Essex High School junior, and 82-year-old Holocaust survivor Ruth Ravina.

“My twin sister Rebecca and I interviewed Ruth for our Mitzvah Day project,” Klein, who was put in touch with her by council director Barbara Wind, explained. “After a while I became sincerely interested in the history beyond (what I was doing for) the project. I’ve always been interested in history and care about humanitarian issues and feel it’s important to eradicate genocide.”

Brought together by the Holocaust Council of Greater MetroWest New Jersey, Klein was inspired to meet other survivors. “It’s important to share their stories as they age because there will be less people to talk about the Holocaust. We need to keep up the fight to dispel rumors that the Holocaust didn’t happen.”

Last fall she interviewed Ravina in front of her junior class. “While it was daunting to sit in front of my peers and share with them an emotional story, it paid off because Ruth was able to impact many with her tale of survival.”

Klein invited Ravina to speak at her school at an earlier time, she said, and will invite her again next year.  She accompanies Ravina to speaking engagements and is proud to introduce her as a friend and explain the importance of sharing her story for its deeper message.

“With perseverance, you can survive the worst times,” Klein said. I became involved due to the political climate today, where people fear others or the unknown. We should not hate, we should love. Ruth wants to prevent genocide and other events like the Holocaust from happening again.”

Most of her volunteer work is with Ravina, she said, and continues to search for additional opportunities to share the octogenarian’s story. Last month, Klein introduced her to a group at Notre Dame Church in North Caldwell. Each time she hears Ravina’s story, Klein said, she learns something new.

“Sometimes it’s about her experience after the war, sometimes it’s a detail she never mentioned before about her mother or cousin who survived the war. There is still so much left that I can learn from Ruth. Recently, I have felt grateful when listening to Ruth that she is in my life since her story has impacted my life so deeply.”

For information about the Holocaust Council of Greater MetroWest New Jersey, visit www.jfedgmw.org/.