Shining A Light on The Elf on the Shelf Musical: Meet Director Sam Scalamoni 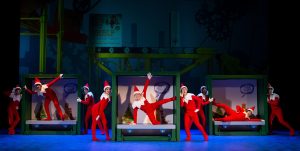 Succasunna’s Sam Scalamoni sits in his directors chair proudly. The musical theater director and actor has done much in his career but nothing excites him more than working on The Elf on The Shelf: A Christmas Musical.

“I love to tell stories and I love to figure out how to capture an audience. What I do, moves people. I am always excited about creating something new and working on something original and building that idea from the ground up,” Scalamoni says excitedly.

The Elf on The Shelf: A Christmas Musical is coming to Red Bank’s Count Basie Theater on December 23. The show has a matinee at 2:00 PM and an evening performance at 6:00 PM. According to Scalamoni, the show is geared for everyone in the family.

“We set out to really create a musical that wasn’t just for kids but for everyone in the family. It is light, funny, and you find out all these secrets of the elves at the North Pole. There’s also a parallel story that’s happening about a family who lost their dad recently and they don’t have much holiday spirit. The show also looks at how the elves are helping this family relearn the magic of the holiday season,” Scalamoni shares.

During the show, guests will be transported to Elf on The Shelf headquarters of the North Pole. There are high energy tap dance numbers, plenty of acrobatic elements, and much more. The show’s overall message is that faith, hope, and love, is what Christmas is all about.

“The overarching message of the show is that faith, hope, and love is what Christmas is all about. I think we tend to forget that from time to time. It’s a great message for kids, grandparents, and parents to check in and go ‘wait a minute. What is this holiday about again? Oh right, it’s about the spirit of it!’ It’s about the spirit of the season and sharing with others,” Scalamoni shared.

Other New Jersey talent represented in the show include performers Alex Ege from Short Hills, Peter Hughes from Basking Ridge, and Krystle Lyn Tomlinson from Scotch Plains. For Scalamoni, the true magic is bringing the story and lure of the Elf on the Shelf to life.

“Bringing the kids and families together to share in a live show where there’s acting and singing and dancing is magical. There’s something about a live show that connects to you emotionally that you can’t get from a television show or from reading a book. We wanted to bring the story to life and get it out there on stage for families to make memories,” Scalamoni says.

The Elf on the Shelf: A Christmas Musical is a creative collaboration between

The Lumistella Company and Mills Entertainment.  The original stage production was developed by Sara Wordsworth (Broadway’s In Transit, Disney’s Frozen JR., Disney Cruise Line’s Frozen, Beauty and the Beast, and Aladdin) as writer and lyricist, Russ Kaplan (Broadway’s In Transit, Dear Albert Einstein) as composer, and Scalamoni (Elf the Musical, Disney’s Beauty and the Beast, Nickelodeon’s StoryTime Live) as director.

For more information or to buy tickets, visit www.elfontheshelfmusical.com.