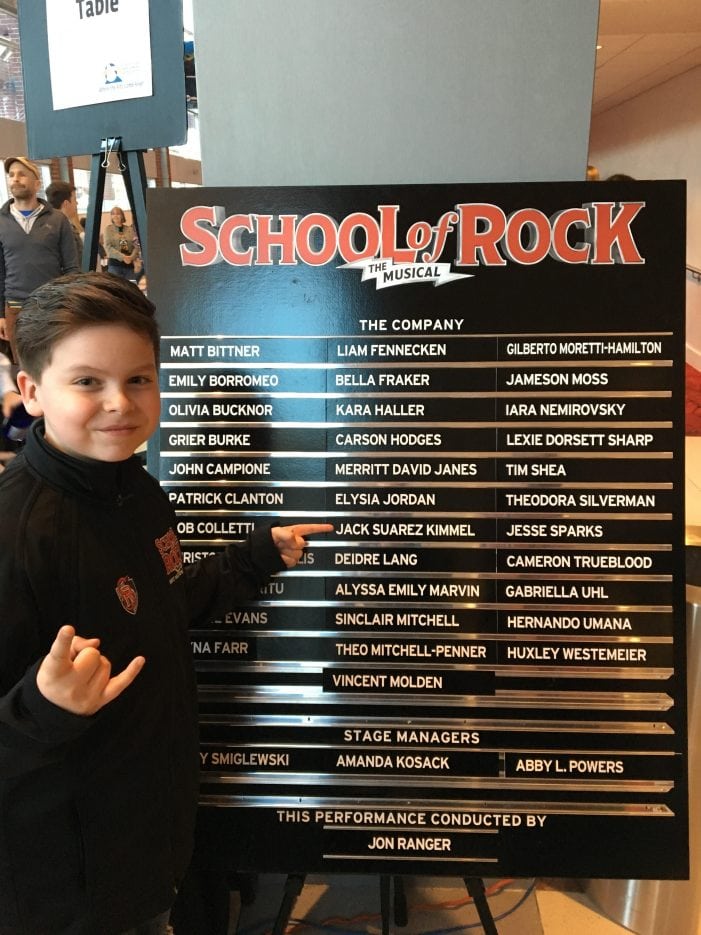 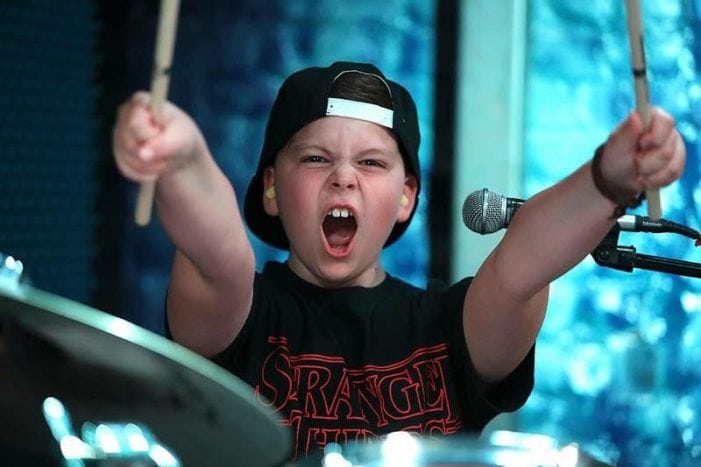 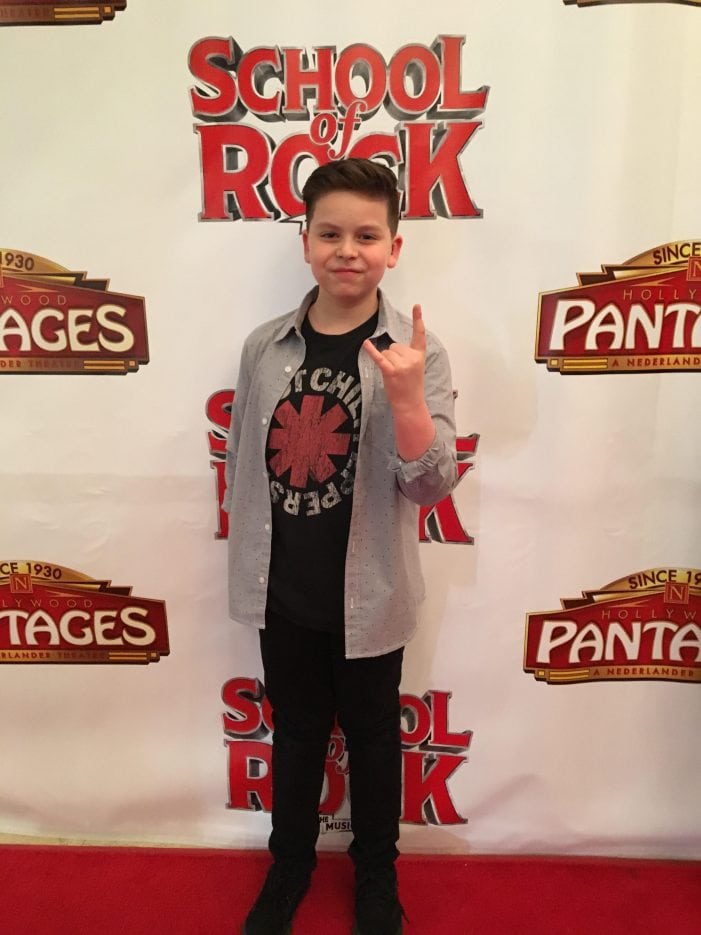 By Stefanie Sears
If Show N Tell is a still an activity at the middle school level, 11 year old Jack Kimmel certainly has a lot to share as a sixth grade at Edison Middle School in West Orange. 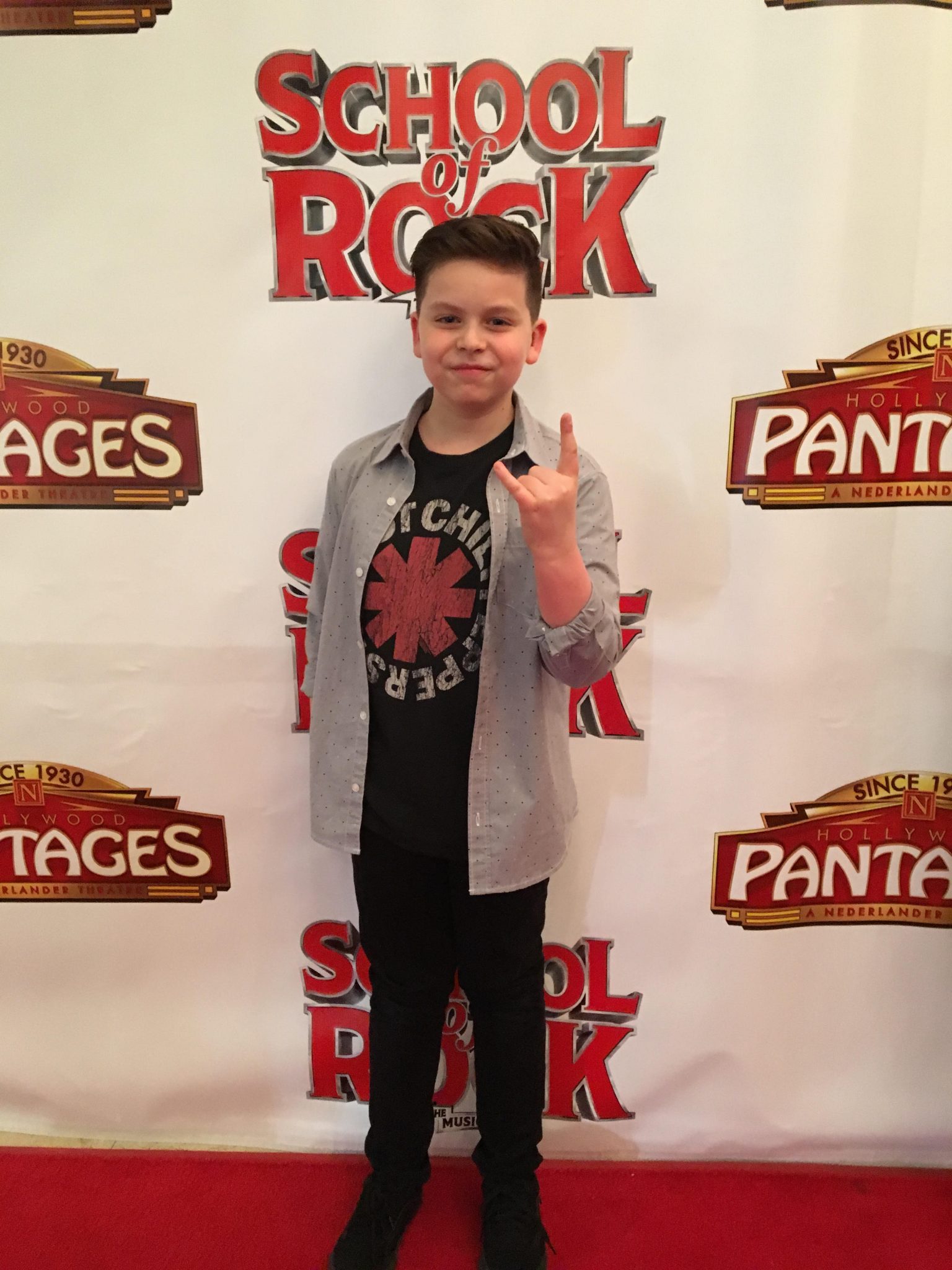 These past six months he got to perform onstage in “School of Rock The Musical” on Tour!
Kimmel has been taking electric guitar lessons as School of Rock in Montclair with James Stivaly since 2015, thus making him quite qualified for the roles, particularly that of Zack the Guitarist. As a swing cast member, however, he took on many different characters, such as Freddy the Drummer, James the Security Guard, Mason the Tech Wizard, and Billy the Stylist.
“A parent of a musician I play with told me about upcoming, open auditions in NYC last fall,” explained Kimmel. “I sent in a video audition and then had in person auditions and callbacks. I found out that I had been cast as a swing. For my video audition I performed
a song from the show, “Teacher’s Pet,” and “House of the Rising Sun” by The Animals.”
Kimmel’s run in the show was from February 12 to August 26. During this time he was homeschooled and his family, especially his father Brett, occasionally traveled with him.
Kimmel’s most memorable tour story involved something unexpected, taking place literally halfway through a performance. Given his position as swing, he had to be prepared for anything.
“Swings are always backstage in case they are needed,” he shares. “We were in Costa Mesa, Calif., and I was rehearsing one of my other roles when the stage manager came to tell me that the actor who played Billy was not feeling well and that I needed to get ready
ASAP because I would be going on in Act 2. Although I performed the entire show many times, this was the first time I got the call to go on midway. My whole family was in the audience watching the show, not knowing I would be performing and they found out during intermission (as did I!). The same mid-show call to perform happened again after that first time in Costa Mesa. It’s very exciting when it does!”
Kimmel’s favorite tour stop was Los Angeles because of its historical significance and landmarks.
“It was amazing to perform at the historic Hollywood Pantages Theater,” he says. “I also got to walk on Hollywood Blvd. and walk along the Walk of Fame. We were there for one month and it was so cool to be in a city I’ve dreamed about visiting. The tour is nationwide and during my six month run I went to 17 cities.” 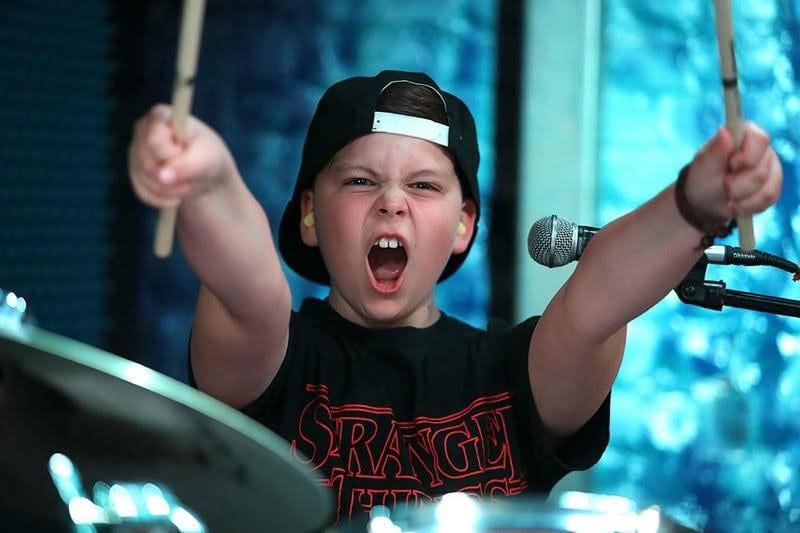 While in Los Angeles Kimmel also met Jack Black, who is known for his portrayal of main character Dewey Finn in the 2003 original film version of the musical, Andrew Lloyd Weber, the musical’s composer, and Panic! at the Disco lead vocalist Brendon Urie, at various times.
“Jack Black gave all of us kids advice to keep doing what you’re doing and never give up,” said Kimmel.
Kimmel’s other performing experiences include playing Danny Zuko in “Grease” and Tevye in “Fiddler on the Roof” at the JCC Metrowest Camp Deeny Riback in Flanders.
As for future goals, Kimmel would love to join the “Hamilton” cast or even play Dewey Finn in “School of Rock The Musical.”
“I would love to continue acting and if my school has a production I would definitely be interested in that!” he says. “If there are any opportunities in television or movies I would definitely pursue that as well. Music will always be my first passion and it is what I love to do the most.”
If Kimmel was not 11 years old, he would be auditioning for rock/heavy metal bands. But for now, he is happy with starting sixth grade and making new friends, as well as “making/playing music and rocking out!”