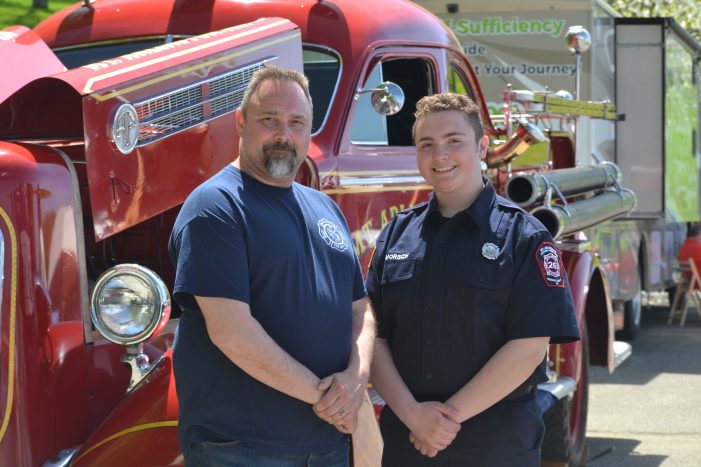 John Morsh, a lieutenant in the Mt. Arlington Fire Department, and his son, Kyle, a firefighter, with the 1939 truck. 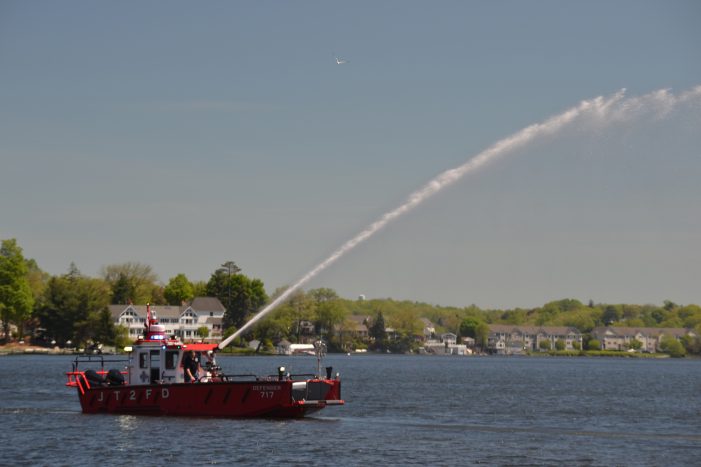 The Defender with a powerful spray. 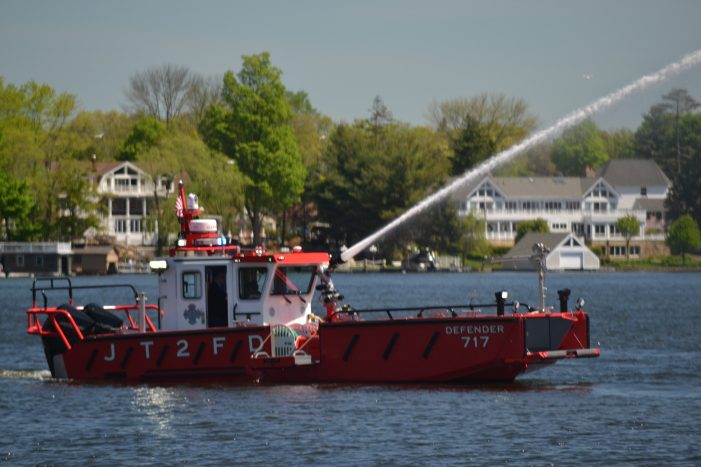 The Defender2 demonstrating on Lake Hopatcong. 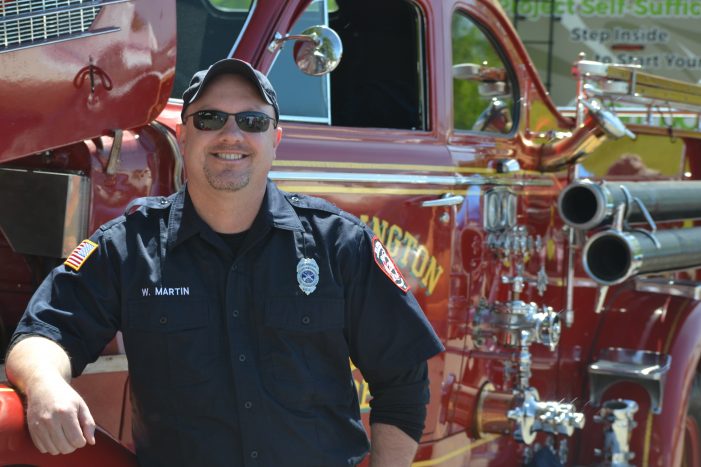 Wes Martin with the brightly polished chrome of the 1939 Ahrens-Fox fire truck.

For the first time in five years, the Saturday of the Lake Hopatcong Block Party dawned clear and bright, defying even the weather reports that called for partly cloudy.

The Block Party, the biggest event of the Lake Hopatcong Foundation year, is held at Hopatcong State Park on Mother’s Day weekend. The Foundation pulls together about 200 volunteers to create the event each year.

Like any block party, this one features music, food, vendors, games for children, non-profit groups, plenty of swag and opportunities for neighbors to catch up.

The center entertainment area was set up in front of the park’s pavilion. In previous years, local bands played almost constantly, but the volunteers decided to bring in demonstrations instead.

Other shows demonstrated Crossfit and martial arts routines. The mayors of the municipalities were invited to talk about their community services.

Some demonstrations were on the lake. The Defender 2, the new Jefferson Township Fire Department Fireboat gave a demonstration. Although property of the Jefferson Fire Department, it is used all around the lake and each municipality contributed to its purchase and upkeep. Jefferson has the largest percentage of shoreline.

The Mt. Arlington Fire Department proudly displayed the 1939 Ahrens-Fox engine that served the borough until the 1970s. It was the second truck the borough bought and the first it bought new, according to past chief John Morsh who has been leading the two-year effort to restore the engine.

The truck fought some of the big hotel fires: the Alamac, the Dawn Patrol, the Suomi Hovi, Morsh said.

The Alamac, originally the Hotel Breslin, was the biggest hotel around the lake, overlooking Van Every Cove, it burned in 1948. The Dawn Patrol was originally the Edgemere Hotel and was in the process of being restored when it burned in the 1960s. The remains are now the Parish Hall of St. Peter’s Episcopal Church. The Suomi Hovi on Nolan’s Point, was the last of the major hotels to burn, in the 1970s.

Morsh and Firefighter Wes Martin said it is amazing how much of the technology on the 1939 truck remains today.

“A lot of tech just doesn’t change,” Martin said, noting how the Defender 2 has centripetal pumps just like the Ahrens-Fox.

The main difference is the strength. The newer trucks produce more pressure and more speed and carry more

The old truck pumped 150 gallons per minute while new ones pump 1500 gpm.

Martin was publicizing the department’s beefsteak dinner which will be Friday, June 21, at Casa Bianca on Berkshire Valley Road in Oak Ridge. Tickets are $50. Doors open at 6:30 p.m.

The Roxbury Art Association was distributing literature along with a number of other non-profit groups.

Visitors could take free rides on the Miss Lotta excursion boat or walk through the display of antique or modern boats. The area nearest the Lake Hopatcong Historical Museum was a large food court for the day.