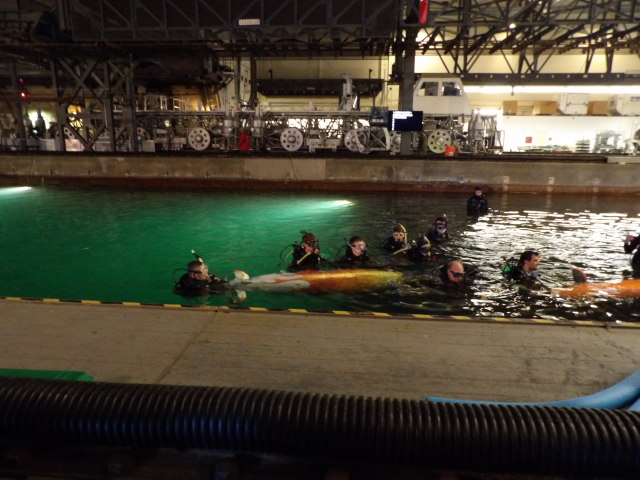 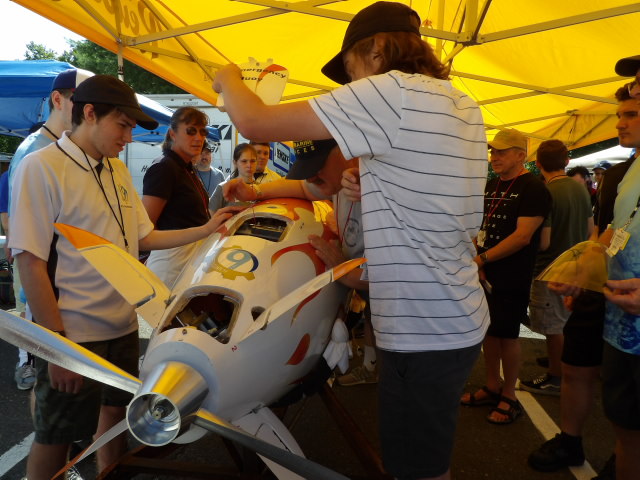 Professor Christopher Land, a former officer on a nuclear powered submarine in the Navy, reached out to ISR eighteen years ago when his students approached him asking if they could participate in a group project. He had wanted to integrate a “Senior Project” into the curriculum of his Engineering program so the timing was perfect.

challenging. Initially it was held in Florida. When Land read that the competition was in the ocean he didn’t think it would be safe. “I remember saying to the students ‘Let me get this straight. You want me to go to the Board of Education and get permission to design and build a human-powered submarine, let one of you get in it, and release you into the ocean? I don’t think so!’” The next week the competition was moved to a pool at the Naval Base and Land signed up his team.

The Seniors designed a submarine and shared the plans with Juniors who would need to construct and present it the following year because the competition is every other year. Land said that the Juniors “proceeded to rip the design apart.” Fortunately, after working out some issues, the Juniors were able to build Umptysquatch 1, Sussex Tech’s first human-powered submarine.

The unusual submarine name, Umptysquatch, comes from Land’s use of that word during physics lectures. Umptysquatch’s meaning is similar to “thingamajig.” He said that when he was in the Navy people used the term when they couldn’t think of a particular word. Land objected when his students chose that name, but the Juniors refused to change it. The unique name turned out to be good for publicity and their story was picked up by national news.

Land reported that the Diving Supervisor at the competition had a lot of fun with the name of the team. “During our performance at ISR-7 the Diving Supervisor refused to refer to them as Umptysquatch. He preferred the following monikers: ‘Umptyscratch,’ ‘Humpty squash,’ ‘Always Crash,’ and ‘Sasquatch.’ “

Each competition’s submarine team is comprised of up to 30 Junior and Senior members. The process begins on day one of school. The first task is for the students to decide if they want to pursue innovation or speed because prior teams discovered that there isn’t time for both. Once the concept is conceived, the team divides up into design groups: propulsion, hull, steering and diving, safety, etc. The design phase normally concludes around at the end of December. Manufacturing of the design then lasts from January to May. The final phase of the project is testing the submarine in the YMCA pool.

Bill lamia, CEO of the Randolph YMCA, welcomes the students to their facility to test their submarines. He is delighted to help the students train for the competition. “The YMCA supports all opportunities for individuals to learn and grow and thrive. We were thrilled at the chance to support the students and their challenge to design, build and race a human-powered submarine. It is a remarkable program and I commend the Foundation for Underwater Research Education for providing the opportunity for all the young men and women that participated.”

Teams create a one- or two-person “wet” submarine for the competition and use scuba equipment to breathe the air in the submarine as they navigate over an underwater course. The submarines entered in the race are all different because each is made by separate teams and incorporate a variety of new techniques to guide and propel the structure.

Dennis Santos of Elite Scuba, the company that lends the students their scuba gear and certifies them in scuba, said he’s proud to be involved in the project. “It’s a wonderful program that gives the kids an opportunity to learn a unique and diverse set of skills – Engineering, Physics, Chemistry & Physiology are all incorporated into Mr. Land’s program and the Scuba certification training they take part in. We are always happy to support Mr. Land, Sussex Tech & their submariners!”

Umptysquatch competed against around 20 other schools, mostly engineering universities and colleges from around the world. Only three high schools presented at ISR-15.

The students gain remarkable experience because they use the information they’ve learned to work hands on as a team and problem solve as they design and build the submarines.

Awards are given for “Use of composite materials”, “Best Spirit of the Races”, “Innovation” and “Best use of Technology.” Sussex Tech won First Honorable Mention for Innovation for their use of integral buoyancy tanks and their Automated Buoyancy Control System.

Land said that Sussex’s team has won many times before but it’s the work they put into the submarine that’s important. “We have won various awards in the past, nearly all of the ones listed above at different times during different races. As I tell the students during the project, ‘We just want to be in the picture with the other 20 or so international teams. Only 20 teams in the world take on this monumental design/build engineering challenge. The fact that we are there competing at that level makes us all winners.’”