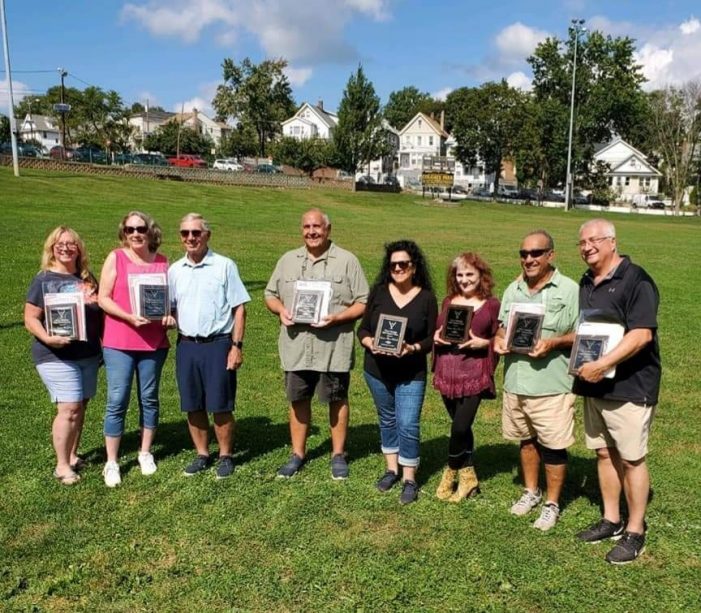 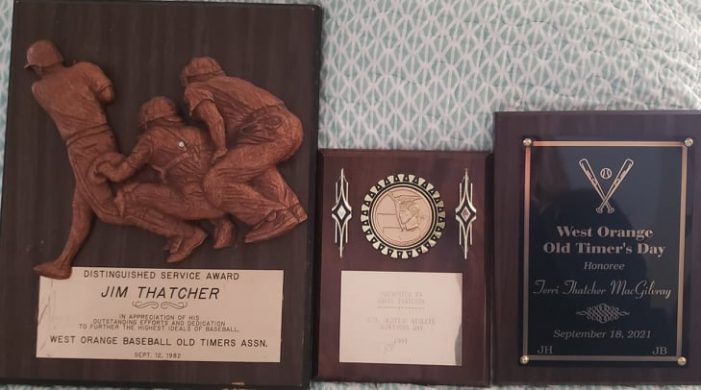 MacGilvray was inducted into the Colgate Park Hall of Fame, where athletes are honored for athletic achievements and participation in events, as part of the 44th West Orange Old Timer’s Day on September 18, 2021.

“What was really cool about my father’s – my dad had emphysema since he was 51,” recalls MacGilvray. “So, when he was honored, he obviously couldn’t run. We got him up to bat, which was a miracle because he was scared to death to do anything, God bless him. But we were like, ‘Dad, please, you’re being honored. You should try to get up to bat.’ So, he got up to bat, and I ran the bases in his old West Orange Pirates uniform. It was so hot, but it was the coolest thing ever! They were a semi pro team, and my dad was a phenomenal baseball player.” As MacGilvray that afternoon touched home plate, she entered into an embrace with her dad. “I’m going to cry talking about it because it was the best, just awesome.”

Some of the Thatcher children attended West Orange High School, but Terri attended Mountain High School. “I inherited my father’s arm,” says MacGilvray, who graduated high school in 1979. “I had a gun for an arm. As a kid, I played at Eagle Rock School, in the sandlot there every day in the summer. And then when I went to junior high school, I played the outfield – left field. And then at Mountain, I played third base, and in college (Monmouth University), I was a catcher.”

The latter position was a surprise. “They had a scholarship player for third base,” remembers MacGilvray, “and I thought, ‘Maybe I’ll get to play someday.’ And our first game, the catcher was on academic probation. The dean came down and told my coach she was not allowed to play, and he said, ‘Terri, put the gear on. You’re going in to catch.’ And I was like, ‘Oh my god, I’ve never caught in my life!’ And he says, ‘That’s alright. I’ll tell you what to do. Just listen to me.’ And I played, and even when she came back, I started from my freshman year all the way through my senior year. I played because my arm was my dad’s arm. Because I could throw someone out from that spot to second base.”

Yes, her dad’s athletic DNA was evident, but MacGilvray attributes her athletic ability to both of her parents. “My mother was also a phenomenal athlete. She taught us to throw a spiral football. She was throwing a football in the street with us when she was 59 years old. We were always doing something athletic,” says MacGilvray, who also played basketball and field hockey in high school and volleyball in college.

MacGilvray, who has been married for five years to her husband, Sean, praised during her Old Timer’s Day speech the special town she grew up in. “In my speech I talked about West Orange, because West Orange is a huge part of me. I always loved growing up there. I always tell people, ‘God took this little section of earth, and he put us on it. We’re all blessed to be put on this section of earth, because it’s an amazing place to grow up. Everybody knew everyone in town, you know? I mean, I could go up the hill, and I knew people up there. I could go down the hill, from Our Lady of Lourdes Church all the way down to the valley, and I knew families. Everyone knew everyone. And if anyone was in trouble or someone in your family got sick, people came with anything you needed.”

And so still are her mom and dad. They were on her mind on September 18th when she received her plaque. “I was thinking about my parents more than anything. That they’re watching me from heaven, looking down.”