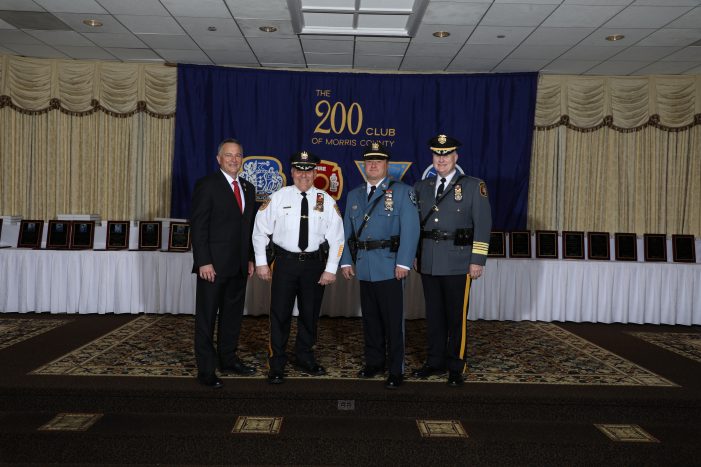 Master of Ceremonies, Morris County Sheriff James Gannon began the awardee recognition by addressing the attending 400 members of the public. He described the heroic and ‘selfless’ efforts of public safety responders, detailing five separate life-saving incidents which included two dangerous ice rescues (Denville, Kinnelon), one fiery motor vehicle collision (Rockaway Township), a split-second command decision that has saved and changed a life forever(Madison), and an ”MCI”, Major Casualty Incident (Mt. Olive), involving hundreds of coordinated first responders from multiple agencies, including hospital medical personnel and multiple town agencies. It is an,” Honorable and difficult job faced by all first responders” Gannon shared, “..who daily experience the added stress of an ever-changing world in terrorism.” “We salute you, the American Hero…acting with courage, honor and self-sacrifice. God Bless you all.”

Would you risk your life twice in one day?

Kinnelon Police Department received a 911 call approximately 8 am on February 21, 2018. A man had fallen through the ice at Butler Reservoir in Kinnelon and was thrashing in the water 30 yards off shore for almost 15 minutes and in danger of hypothermia when Lieutenant Joseph Napoletano, Patrolwoman Melissa Huizenga and Patrolman Keith Kelly arrived on the scene. The victim’s dog was also in distress.

Without regard for his own safety, Lieutenant Napoletano immediately crawled out onto the ice on his stomach to rescue the man, crawling on his stomach the entire way back. Then, Lieutenant Napoletano crawled back onto the ice and rescued the dog with a catch pole. This was an arduous process, and the tentative nature of the ice and freezing temperature intensified multiple life-threatening conditions.

Kinnelon Mayor Jim Freda representing Chief John Schwartz, expressed his gratitude to the 200 Club of Morris County for the recognition of Lt. Napoletano’s heroic efforts, emphasizing the unknown perils that first responders encounter on a daily basis. The swift and heroic actions and perseverance of Lt. Napoletano saved the lives of both man and dog.

Father Lance Reis of St. Virgil’s Church gave the Benediction: “(God) Give these first responders the strength so that you will be honored. Watch over all the men and women who so generously devote themselves to helping others. Grant them courage, wisdom, strength and compassion.”

Since 1971, the non-profit mission of The 200 Club of Morris County is to support Morris County’s first responders through scholarship funding and financial support for grieving family members of public safety heroes who lose their lives while in the line of duty. President Bill Lockwood quoted Martin Luther King, “Darkness cannot drive out darkness; only light can do that.”

Awards Co-Chairs Janet Rapisardi and Ron Barnett thank the public safety Heroes of our communities, who courageously put their lives at risk to guarantee the safety of those residing or traveling in Morris County. Through memberships and generous personal and corporate donations and sponsorships, the 200 Club of Morris County has collected more than $5 million to date for this worthy cause.

Membership Co-Chair Jim Rizzo invites you to our next “New Member event” with an anticipated date of August. For annual membership, ad journal advertising or donations, Call Club Administrator Lori Richmond today at 973-630-7933 or info@200clubofmorriscounty.com and use code 08JJR19 for a special membership advantage.